A recent study conducted by the Zoological Society of London (ZSL) on endangered Galapagos sea lions (Zalophus wollebaeki) has revealed that the animals are more susceptible to starvation as a result of their exposure to humans. Over a span of more than 18 months, conservationists tagged and monitored the behavior and physiology of two groups of 60 Galapagos sea lions, one in San Cristobal, which is inhabited by humans, and one in Santa Fe, where there are no humans, dogs, cats, mice, or rats.

The study has shown that exposure to human influences such as pets and pollution can impair the animal’s level of immunity, making them less able to hunt and more likely to go hungry when food is scarce.

“The immune systems of San Cristobel sea lions were more active, perhaps indicating a threat of infectious disease, which could mean human activity is increasing the chance of potentially dangerous diseases emerging in the Galapagos sea lion,” said ZSL’s Paddy Brock. “A tell-tale sign of an unhealthy sea lion is a thinner than normal layer of blubber, which is what we saw in the sea lions on San Cristobal. This was all the more notable, as we didn’t notice these patterns in sea lions on Santa Fe, where they live without the presence of people or pets.” 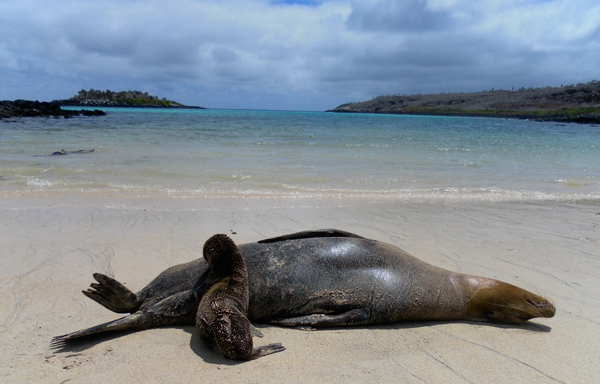 People continue to import pets regularly to the Galapagos in spite of laws put in place to protect the unique wildlife of the islands. These imported pets bring with them an increase in risk of new diseases transferring to the local species. While the pets themselves may appear healthy, they can carry and spread diseases that have no effect on them, but can be completely devastating to other animals.

“Pet owners on the Galapagos can help lower the risk of disease spread by following the guidelines of the Galapagos National Park and the Galapagos municipal authorities, which do not allow the import of pets to the archipelago, their breeding on the archipelago or their movement between islands,” Brock told mongabay.com. “They can also minimize the interaction between their pets and wildlife, which in the case of dogs and sea lions can be done by always walking one’s dog on a lead when near a sea lion beach.”

Another issue associated with the sea lions’ overactive immune systems is the dumping of sewage into the bay on San Cristobal. This is potentially increasing the exposure of these animals to human related germs and bacteria. 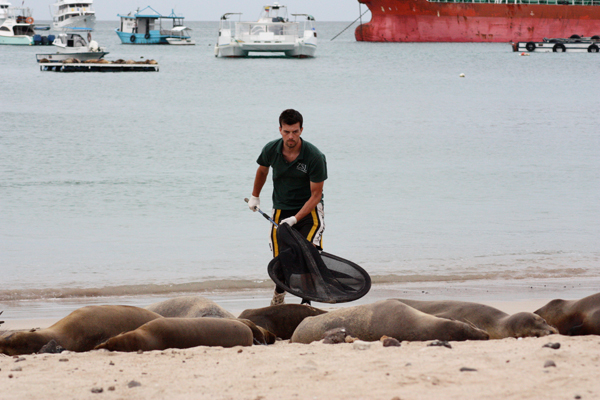 “The patterns we described are in pups and juveniles that cover an age range from shortly after birth until two years old,” Brock says. “The effect was strongest in the first three months of life, and this age group may have been most affected as this is the period of development during which certain parts of the immune system are developing and maturing, and are more sensitive to environmental influences.”

In order to address these threats facing the Galapagos sea lions, with the added help of collaborators, ZSL will carry out further research on the methods behind these described patterns, such as genetics’ role in the issues. For others looking to help, Brock has suggested, “People who don’t live on the Galapagos can contribute by getting involved with – or donating to – the Galapagos National Park or to one of the charitable organizations that support its work such as the Galapagos Conservation Trust or Charles Darwin Foundation.”

(06/25/2012) Lonesome George, the sole surviving member of the Pinta Island tortoise (Chelonoidis nigra abingdoni), was found dead on Sunday by staff at the Galapagos National Park. With George’s passing, the Pinta Island tortoise subspecies officially falls into extinction. First found in 1972, Lonesome George became famous for representing the last of his kind. He was believed to be around 100—middle-aged for a Galapagos tortoise which can live to 200 years old. Staff plan to do an autopsy to determine the cause of death.