Engaging the public on green issues via environmental cartoons

Engaging the general public on issues like extinction, climate change, habitat destruction, and pollution can be a challenge due to the generally downbeat nature of environmental problems. But an illustrator in Nagpur, India is taking a different approach: cartoons.

Rohan Chakravarty, a designer, artist, and ardent wildlife enthusiast, has been posting environmental-themed cartoons on his blog, Green Humour [Facebook page], since 2009. His work has garnered wide attention, including publication in several wildlife and environment magazines and web sites as well as accolades in the form of the Sanctuary Asia Young Naturalist Award 2012 and winning a climate change cartoon contest sponsored by the U.N. Development Program (UNDP).

In July 2013, Mongabay.com asked Chakravarty about his work. 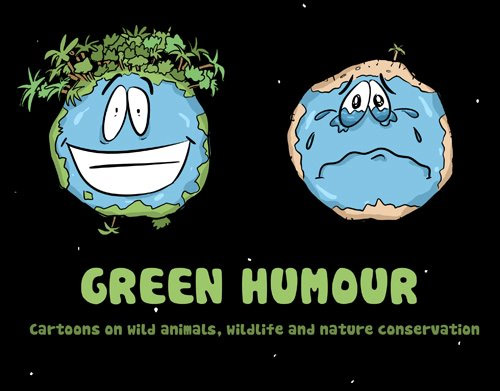 AN INTERVIEW WITH CARTOONIST ROHAN CHAKRAVARTY

Mongabay.com: What is your background and how did you get into cartoon writing?

Rohan Chakravarty: Let me begin my thanking you for an opportunity to feature on Mongabay. I hail from Nagpur, a city bang in the center of India, which is known as the ‘Tiger Capital of the World’ owing to the fact that it has the greatest density of tigers around it for any city. Naturally, this meant that I had all kinds of wildlife at my doorstep (some even literally) which turned me from a passive wildlife lover into an ardent enthusiast, and eventually led me to depict wildlife and conservation through my art. After graduating in dentistry, I took up animation design as my main job, and started developing my series ‘Green Humour’ in my free time. 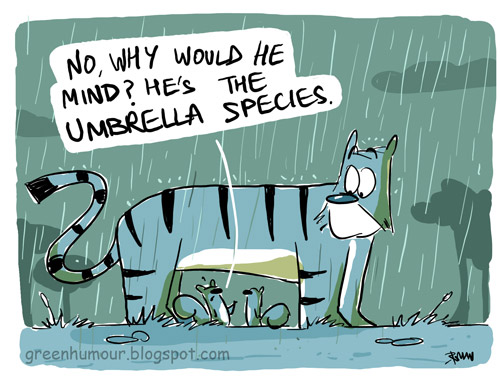 Mongabay.com: What are your favorite subjects for cartoons?

Rohan Chakravarty: Wild animals. Among them, birds. I think birds are both the most charming as well as the funniest of the lot. Even the most majestic and fearsome of all Aves, the raptors, mew like kittens when they open their bills to call out to their mates. Now that’s a gag in itself! 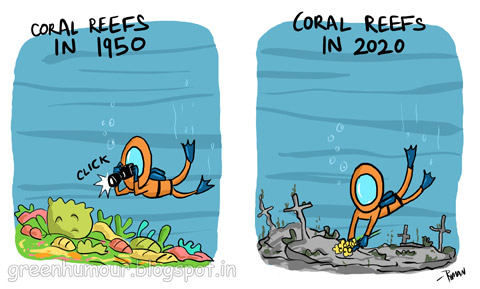 Mongabay.com: Why do you believe that cartoons are an effective way to communicate environmental issues?

Rohan Chakravarty: The human mind tends to retain as well as analyze a situation presented in the form of a funny/ interesting visual rather than plain, simple text; and that’s where cartoons score. A 1000-word essay about pesticides is less likely to make a lasting impact on a reader’s mind than a picture of rickety frogs chundering out pesticides into a man’s cooking pot. (Of course, I’m not discounting the importance of well-researched articles in conservation). 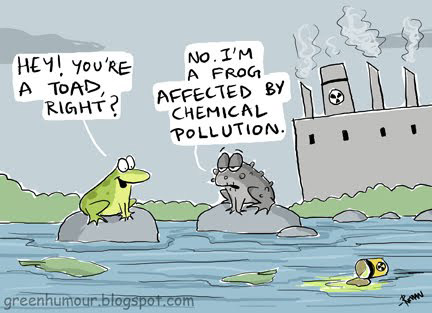 Mongabay.com: Have you gotten any particularly notable responses to your cartoons? (e.g. comments, actions resulting from cartoons, awards, etc)

Rohan Chakravarty: I have won two awards for my conservation cartoons so far. The first was the Asia-Pacific cartoon contest on climate change, organized in February 2012 by the UNDP and the French Ministry of Foreign Affairs. I drew a cartoon depicting the effects of climate change on the Sunderban Delta in the Bay of Bengal, which won me the first position. The second was the Sanctuary Asia Young Naturalist Award in November 2012.

Belinda Wright is a conservationist I’ve always looked up to for her immense passion and life-long dedication for conservation. Last year when I had the opportunity of meeting her, the very modest and chirpy Ms. Wright commented referring to my cartoons, “I know several like myself, but I know just one you”. That remains the most cherished compliment for me. 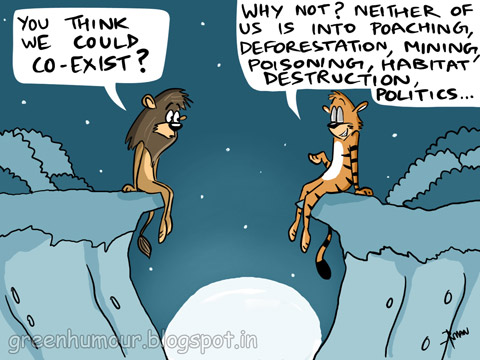 Mongabay.com: How are your cartoons typically distributed? What kind of pick up have you had (where are the cartoons appeared)?

Rohan Chakravarty: Owing to the lack of syndicates for cartoonists in India, I have myself been sending out cartoons to as many wildlife-based publications as I can. My cartoons first appeared in the popular wildlife magazine Sanctuary Asia. Currently Saevus (a wildlife magazine), Tigerlink (a journal on tiger conservation), Current Conservation (an environment journal), Tinkle (a kids’ digest) and Sustainuance (a magazine on corporate sustainability) run my cartoons among others, which include some newsletters and websites. Other than wildlife, I also draw cartoons for corporates, retail magazines and websites. 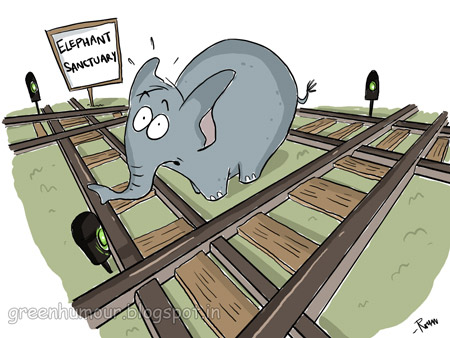 Mongabay.com: What’s next for you?

Rohan Chakravarty: While the web and the social media are great tools for getting your work noticed across the globe, seeing your work printed is an extremely satisfying and overwhelming feeling. I intend to get Green Humour syndicated and advance it to a daily series. I am also looking to feature as many species as possible in my cartoons.