Chinese who live north of the Huai River will lose an aggregate 2.5 billion years of life expectancy due to the extensive use of coal burning in the region, concludes a new study published in Proceedings of the National Academy of Sciences.

The study, which involved researchers from MIT, China, and Israel, estimated the impacts of particulate matter from coal-powered heating on life expectancy. In the process, the authors developed a rule-of-thumb for the effects of air pollution: “every additional 100 micrograms of particulate matter per cubic meter in the atmosphere lowers life expectancy at birth by three years,” according to a statement from MIT.

The researchers also compared the effects of energy policy on life expectancy. People who live south of the Huai River — the conventional “dividing line” between north and south in China — had lower rates of mortality associated with diseases linked to exposure to particulates. The difference: the Chinese government provided free coal for fuel boilers in the north, but not in the south.

“It’s not that the Chinese government set out to cause this,” said study co-author Michael Greenstone, an economist at MIT. “This was the unintended consequence of a policy that must have appeared quite sensible.”

“There are no other policies that are different north or south of the river, so far as we could tell,” he added, noting that other types of pollution are similar between the two regions. Coal-carrying barges in Shanghai in 2006

Greenstone said the findings add further weight to the need to curb coal use.

“What this paper helps reveal is that there may be immediate, local reasons for China and other developing countries to rely less on fossil fuels. The planet’s not going to solve the greenhouse-gas problem without the active participation of China. This might give them a reason to act today.” 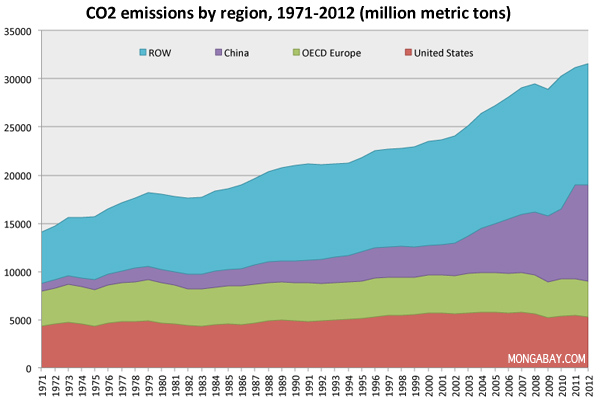 The paper comes shortly after China adopted a framework on limiting carbon emissions. Currently limited to a handful of cities, the Chinese government hopes the program could eventually cut the country’s emissions, which are the highest of any country on Earth.

Burning coal responsible for over 20,000 deaths a year in Europe

(06/13/2013) Air pollution from Europe’s 300 largest coal power stations causes 22,300 premature deaths a year and costs companies and governments billions of pounds in disease treatment and lost working days, says a major study of the health impacts of burning coal to generate electricity. The research, from Stuttgart University’s Institute for energy economics and commissioned by Greenpeace International, suggests that a further 2,700 people can be expected to die prematurely each year if a new generation of 50 planned coal plants are built in Europe. “The coal-fired power plants in Europe cause a considerable amount of health impacts,” the researchers concluded.

(05/23/2013) China has unveiled details of its first pilot carbon-trading program, which will begin next month in the southern city of Shenzhen. The trading scheme will cover 638 companies responsible for 38% of the city’s total emissions, the Shenzhen branch of the powerful National Development and Reform Commission (NDRC) announced on Wednesday. The scheme will eventually expand to include transportation, manufacturing and construction companies.