Researchers identified the most underfunded countries globally for nature conservation in a study published in the Proceedings of the National Academy of Sciences (PNAS) this week. The 40 most severely underfunded countries contain a third of the world’s threatened mammals. The study provides an opportunity for a ‘rapid global triage’ in conservation: better coordination between donors and a very modest increase in international assistance can limit immediate biodiversity losses at relatively little cost.

The scientists also uncovered possible donor bias in selecting biodiversity projects. For example, all else being equal Muslim countries receive roughly half as little international conservation funding as non-Muslim countries.

Mongabay spoke with the lead scientist in the project Dr. Anthony Waldron, a Professor of Conservation in University of Santa Cruz, Brazil. 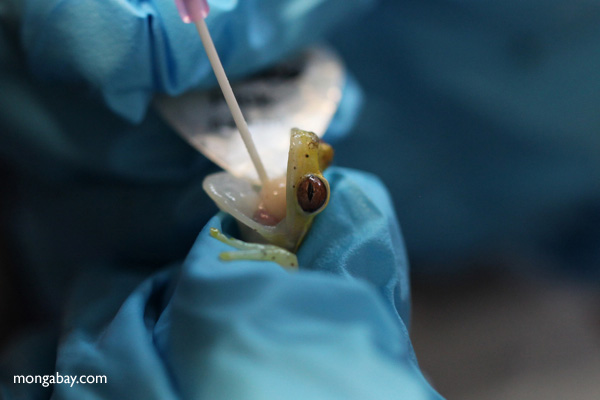 Herpetologist trying to save a Hyloscirtus colymba tree frog in Panama. Photo by Rhett A. Butler 2011

Mongabay.com: Dr. Waldron, what are your most important findings?

Anthony Waldron: First, we knew conservation was underfunded generally, but there was no global sense of where the picture was worst and “least worst”. Our analysis suggests where the funding gaps are biggest.

Second, it’s worrying that the funding gaps are concentrated in certain areas. Across South East Asia, threatened species are covered by a solid cloud of very poor funding. Worldwide, species adapted to more arid habitats also seem to be at risk from poor resources.

Mongabay.com: What is the significance of your research for policymakers?

Anthony Waldron: Nobody is in charge of all global conservation funding. The significance therefore depends on what you are responsible for. If you’re Australia, you need to know that your spending is below average. If you’re an international donor to several countries, you can use the results to see which of your countries seems underfunded.

We also need a coordinated approach to conservation spending. There has been a lot of criticism about individual funders competing with each other and not coordinating. By presenting a global overview, we’re also inviting all the donors, NGOs etc. to take a more coordinated approach. 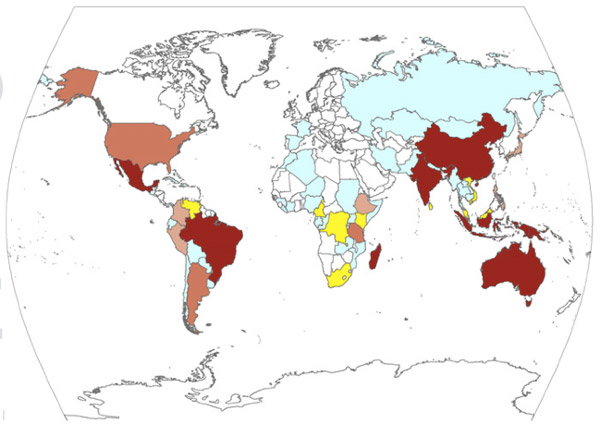 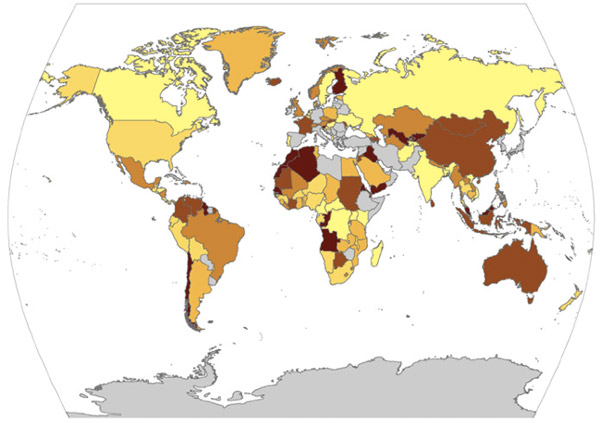 Underfunding levels from the predictor model (darker colors indicate worse underfunding, in blocks of 20 countries). Maps courtesy of the authors.

Mongabay.com: Can you highlight the top three countries that require the most urgent injection of conservation funds according to this ‘rapid global triage’?

Anthony Waldron: Not really. The study reveals what a balanced distribution of conservation funding around the world would look like. Numerous countries have less than a well-balanced amount. If you gave extra money to just three or four countries, you would be leaving a hundred other countries unbalanced. Picking favorites may therefore end up saving less biodiversity.

Mongabay.com: Does the predominant religion in a country influences international donors’ choice?

Anthony Waldron: We really must emphasize that we haven’t explicitly demonstrated donor bias, we only show a pattern of lower funding in Muslim countries, especially in the Arab world and around Afghanistan. There are many reasons why this could have occurred. We simply flagged up the pattern so that donors could look in the mirror and consider for themselves why it occurs.

Mongabay.com: Does your paper provide the bill for global biodiversity conservation?

Anthony Waldron: No. We gave a list of dollar amounts for how far below average each country’s biodiversity funding fell. Readers should be very aware that “Amount below average” is not the same as, “Amount you need to stop biodiversity loss”. The average is inadequate, so being below average simply means a double red flag.