Hundreds of activists including Bill McKibben and Naomi Klein are going into the heart of Canada’s tar sands this week – not to protest the destruction of the local environment, but to pray for the ‘healing’ of land and the people.

Native elders from all over North America will lead people past lakes of tailings wastewater and massive infrastructure of the tar sands industry along the Athabasca River in Fort McMurray, Alberta.

Organizers say the event, dubbed the Healing Walk, will be a spiritual gathering focused on healing the land, air, water and all living things harmed by the expansion of what is already the world’s largest industrial project.

“This is a sacred walk because it invites us all to begin a process of healing—healing the land from violence, healing ourselves from our dependence on an economy based on that violence, and healing our deeply imperiled democracy,” said Naomi Klein, writer and author of bestselling “The Shock Doctrine” on why she is participating.

There are plans to triple the size of the tar sands over the next two decades. An international science panel recently warned that the nearly 200sqkm of toxic wastewater is the biggest threat to the Athabasca and Mackenzie Rivers, a region they called “Canada’s Serengeti.”

“The land is sick here. The people are sick from polluted air, water and food,” says Jesse Cardinal, co-organizer from the Keepers of the Athabasca, an alliance of native and non-natives who started the Healing Walks.

“There is emotional and spiritual sickness too,” Cardinal said referring to high rates of drug use and prostitution among the tens of thousands of tar sands workers including native people.

The tar sands boom is also “poisoning” Canada’s politics through “escalating attacks on First Nations rights, by the dismantling of crucial environmental protections, and by the gagging of scientists,” Klein said.

Cardinal believes that “prayer is powerful. We have faith a higher power will reach out to those causing all this destruction.”

The 8-mile (14-km) walk on 6 July will be the fourth and it will have special meaning. Four is a sacred number among many native peoples and in other cultures, said Clayton Thomas-Muller.

“It means this is the beginning of a new cycle, a slowdown and eventual end to the tar sands,” Thomas-Muller, a co-ordinator with the Idle No More movement, an ongoing protest much like Occupy Wall Street that spread across Canada in protest against the Harper government removing indigenous rights and environmental protections.

More than 100,000 are active and planning a summer long series of actions in Canada and other countries, he said.There will be no protests or protest signs allowed on the Healing Walk. 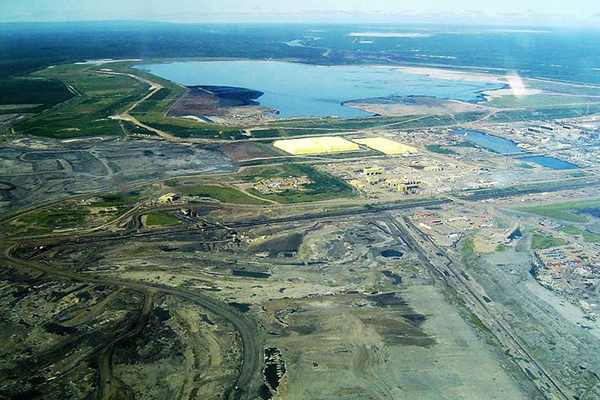 Aerial view of Syncrude’s base mine with tailing pond in the background. Photo in Public Domain.

(06/04/2013) Efforts to expand production from the Alberta tar sands suffered a significant setback on Friday when the provincial government of British Columbia rejected a pipeline project because of environmental shortcomings. In a strongly worded statement, the government of the province said it was not satisfied with the pipeline company’s oil spill response plans.