A consortium of gas companies headed by Pluspetrol and including Hunt Oil plans on detonating approximately 38 tons of explosives in the south-east Peruvian Amazon in one of the most biodiverse regions in the world.

The detonations are part of 2D and 3D seismic tests planned by Pluspetrol in its search for new gas deposits in the Camisea region—plans that are currently pending approval by Peru’s Ministry of Energy and Mines (MEM).

According to a series of ‘fact sheets’ recently issued by Pluspetrol, the tests will require approximately 38 tons of explosives, the construction of 80 heliports, roughly 1,200 workers, and about 9,500 explosions, each one 15 meters underground.

Almost three-quarters of Pluspetrol’s concession, called Lot 88, is superimposed over the supposedly ‘intangible’ Kugapakori-Nahua-Nanti Reserve (KNNR), established in 1990 to protect the land and lives of indigenous peoples in ‘voluntary isolation’ and ‘initial contact.’

The KNNR is immediately to the west of the world famous Manu National Park, where UNESCO says the biodiversity “exceeds that of any other place on earth,” and acts as part of its official buffer zone.

The 2D tests will involve the “acquisition of 197km in nine seismic lines,” states Pluspetrol’s fact sheets, and the 3D tests will cover “an area of 379 square km,” including “90 receiver lines and 35 source lines representing 870 km and 742 km of temporarily intervened length.” 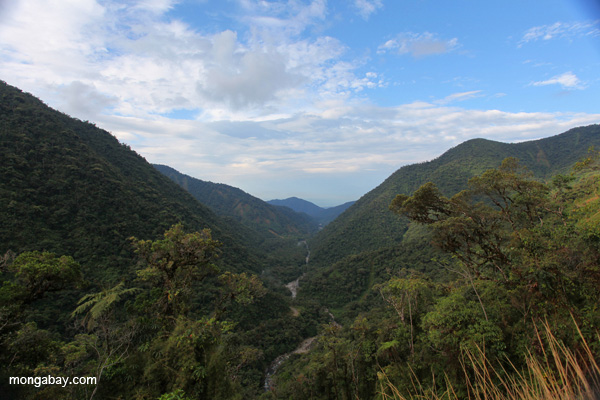 According to a map accompanying the fact sheets, some of the lines will be in titled indigenous communities bordering the KNNR but the majority will be in the reserve itself and Manu buffer zone.

An Environmental Impact Assessment (EIA) of Pluspetrol’s plans submitted to MEM last November states that the 2D and 3D tests would be conducted at the same time, but according to the fact sheets that has now changed.

“The 3D Seismic project will not be performed simultaneously with the 2D Seismic project,” one fact sheet states, before going on to say that the 3D tests will take place in 2015 but providing no anticipated starting date for the 2D.

The tests will involve constructing four sub-base camps, three of which, according to the EIA, will be in the KNNR and Manu buffer zone and will provide accommodation for 200 people and include offices, recreation areas, heliports and storage for the explosives.

One of the sub-base camps is due to be built at a location known by Pluspetrol as Kimaro Norte, which is in the headwaters of the River Serjali where the presence of isolated indigenous peoples has long been acknowledged and where it was previously considered too risky to operate.

In a report in May 2012 Peru’s indigenous affairs department, INDEPA, stated that the 2D tests would put the isolated peoples in the KNNR in “extreme danger” and the 3D tests would pose an “extreme risk.”

These planned seismic tests are part of a major expansion of operations in Lot 88, where Pluspetrol has already built wells and pipelines in the western part of the KNNR and it has been pumping gas since 2004.

If expansion proceeds as planned, it will also include the construction of a 10km flowline and 21 new wells, moving operations deeper north, east and south into the KNNR and Manu buffer zone in the direction of the Manu National Park itself.

Last December Peruvian indigenous organizations AIDESEP, COMARU, FENAMAD and ORAU announced their intention to file a lawsuit to stop the expansion of the Camisea project, as operations in this region are known.

Together with international human rights organization Forest Peoples Programme, three of these organizations—AIDESEP, COMARU and ORAU—have also appealed to the United Nations, which swiftly responded by urging Peru’s government to “immediately suspend” the expansion.

David Hill is a freelance journalist and currently a consultant for the Forest Peoples Programme, an international human rights organization supporting indigenous organizations in Peru concerned about the impacts of the Camisea gas project’s expansion on ‘isolated’ indigenous peoples.

(06/10/2013) Carbon dioxide emissions from fossil fuels use hit a record in 2012, according to a new report from the International Energy Agency (IEA).