The Norwegian Parliament has called for the country’s pension fund to strengthen its commitment to avoid investing in companies linked to rainforest destruction.

Norway’s $700 billion sovereign wealth fund last year stepped up its no-deforestation policy, asking portfolio companies to disclose their impacts on tropical forests as part of the fund’s risk management strategy related to climate change. It divested from 23 palm oil companies found to be non-compliant with its policy.

Now the Norwegian Parliament is calling for stricter criteria, including a provision that tree plantations should not count as regrowth of natural forest.

“Replanting in the form of tree plantations [does] not outweigh the harms associated with the destruction of rainforests and therefore should not be equated with or replace reduced deforestation,” stated a white paper issued last week by Parliament. “The majority [of Parliament] believes it is important that expectations be specified, including the elimination of deforestation.” 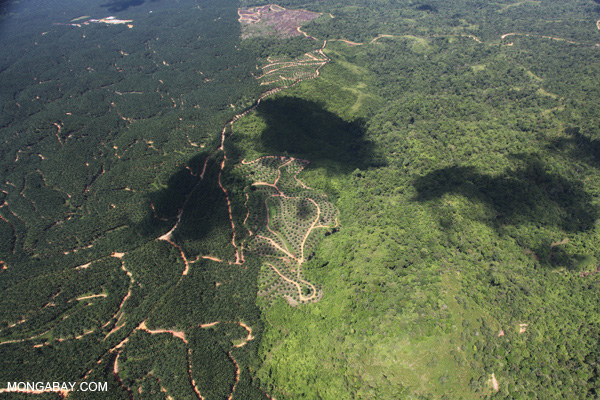 Forest conversion for oil palm plantations in Borneo during 2012.

Parliament went on to “welcome” the fund’s decision to sell of shares in 23 companies that “did not produce palm oil in a sustainable manner”.

“This involved a number of companies that contributed to tropical deforestation through activities in the palm oil industry in Malaysia and Indonesia,” stated the paper. “The majority believes this sends an important signal to the market and welcomes the decision.”

Nils Hermann of the Rainforest Foundation Norway said the moves represented an “important development at the political level” for reducing Norway’s investments in activities that drive deforestation.

“The Norwegian Parliament [had demanded] that the Bank of Norway has a stronger follow-up of its no-deforestation policy,” he said.

Since 2008 Norway has emerged as one of the largest funders of efforts to stop tropical deforestation. The Norwegian government has committed 3 billion krone per year ($522 million) toward protecting forests.