A new species of ant has recently been discovered in the Hortarium of the Los Baños University in the Philippines. Scientists named it the pirate ant (Cardiocondyla pirata) due to the female’s unique pigmentation pattern: a distinctive stripe across the eyes that resembles a pirates’ eye-patch.

The pirate ant belongs to a genus Cardiocondyla that are distributed worldwide, but mainly found in the tropics.

Scientists are currently unsure why the females possess this distinctive eye-marking.

Back in 2008, during a field study of Cardiocondyla ants for her PhD thesis from the Universität Regensburg, Sabine Frohschammer and her colleague, Dr. Bernhard Seifert from the Senckenberg Museum für Naturkunde Görlitz, discovered this new species of ant by chance – between the cleavage of a big stone in a shady rainforest bed. Only later, through a magnifier, did Frohschammer and Seifert realize that these Cardiocondyla ants looked different from others, however it took a stereomicroscope (a microscope that allows an object to appear in three dimensions) for the pair to realize these ants may be a whole new species entirely.

Both sexes of pirate ants are yellowish brown in color. What distinguishes between them is the pigmentation of a dark stripe across the females’ eyes and males’ mandibles. The males’ mandibles are not shear-shaped like in worker ants, but instead look like two long sickles.

Similar to other Cardiocondyla species, the pirate ant is wingless. Therefore, while it is common for other species of ants to mate in the air, pirate ants most likely use their sickle-shaped mandibles to kill their rivals. This hypothesis is based on “four other Cardiocondyle species [with] a similar colony structure and live in a similar habitat which show this particular behaviour,” says Seifert.

By using their sickle-shaped mandibles, males are able to monopolize mating by patrolling over pupae to detect other males who are too close, then grabbing them with their mandibles. 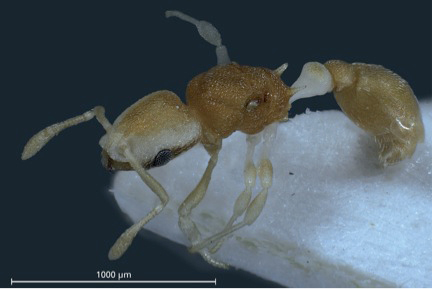 Dorsolateral aspect of a paratype gyne. Only one lobe of postpetiolar sternite is visible. Photo: Bernhard Seifert and Sabine Frohschammer.

Frohschammer and Seifert collected one complete colony of three mature queens, 15 workers and a brood that produced over 20 females and one male in the lab. However, the colony soon died thereafter, limiting long-term observations on the life history of this species. More studies are needed to discover the structure and behaviour of these unique ants.

Forhschammer admits, “It would be very interesting to monitor male behaviour towards rivals, observe matings and explore the social life inside the colony.” 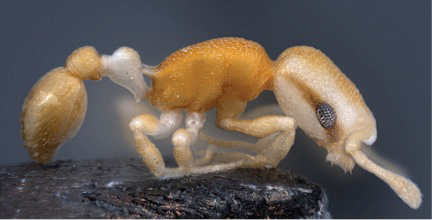 (07/23/2008) No one knows for certain how many insect species reside in the Amazon. One oft-quoted estimate is 30 million, but the actual number could be significantly lower or higher than this. Either way, biologists have long wondered why the richness of insect diversity in the Americas’ tropical forests is exponentially higher than temperate forests. Three popular hypotheses have emerged—the theory of refugia, the marine incursion hypothesis, and the riverine barrier hypothesis. To test these theories a group of scientists, headed by Dr. Scott Solomon, studied three species of leaf-cutter ant species from the Amazon.