After a colder-than-average spring, Alaska is suffering a sudden and record-breaking heatwave. Temperatures on Monday, June 17th hit a stunning 96 degrees Fahrenheit (35 degrees Celsius) in Talkeetna, Alaska, just below the state’s highest temperature ever record of 98 degrees Fahrenheit in 1969. On the same day, NASA’s Terra Satellite’s Moderate Resolution Imaging Spectroradiometer (MODIS) took a rare image of a cloud-free Alaska.

“Other towns in southern [besides Talkeetna] Alaska set all-time record highs, including Cordova, Valez, and Seward. The high temperatures also helped fuel wildfires and hastened the breakup of sea ice in the Chukchi Sea,” a press release from NASA reads.

Climate change is impacting Alaska and other high-latitude regions quicker than rest of the world. In fact, the state is likely to see the first climate change refugees in North America, due to rising sea levels swamping native villages on the Arctic Ocean.

Last year the Arctic saw the lowest sea ice extent on record, dropping to just below 3.4 million square kilometers (1.32 million square miles). While the decline in Arctic sea ice has long been expected to impact local wildlife, recent evidence has also shown it may be influencing weather patterns across the northern hemisphere, including unusual jet stream patterns that get stuck longer than usual causing extreme weather in many parts of the world. 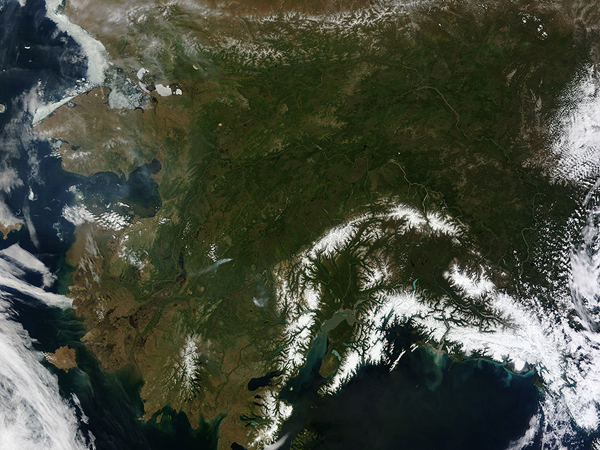 (05/30/2013) This week in New York City, the 27 members of the high-level panel of eminent persons appointed by the U.N. Secretary General will deliver a report providing recommendations on the post-2015 development agenda. This is a critical opportunity to address the inadequacies of the Millennium Development Goals (MDGs) and to chart a new course for sustainable development.

(05/30/2013) A new study by Australian scientists projects that the world will likely warm between 2 and 6 degrees Celsius (3.6 to 10.8 degrees Fahrenheit) from pre-industrial levels by 2100. The study published in Nature Climate Change finds that exceeding the 2-degree threshold is very likely under business-as-usual emissions scenarios even as scientists have long warned that passing the 2-degree mark would lead to catastrophic climate change.