Indonesia drops water bombs on fires, may resort to cloud-seeding

In an effort to control peat fires casting a pall of haze over neighboring Singapore and Malaysia, Indonesia is using airplanes to drop water across hotspots in Riau Province on the island of Sumatra, reports AFP. Officials say they may try cloud-seeding — dumping silver iodide at high altitude — if current fire-fighting efforts fall short.

The fires are a growing source of tension between Indonesia and its neighbors. The Indonesian minister in charge of handling the fires, fanned the diplomatic flames when he told the Jakarta Post that “Singapore should not be behaving like a child and making all this noise.” Singaporean officials have urged Indonesia to step up fire-fighting and investigate the source of the fires, the majority of which are occurring within plantation concessions. Several palm oil companies have deflected blame by saying that local communities started fires. 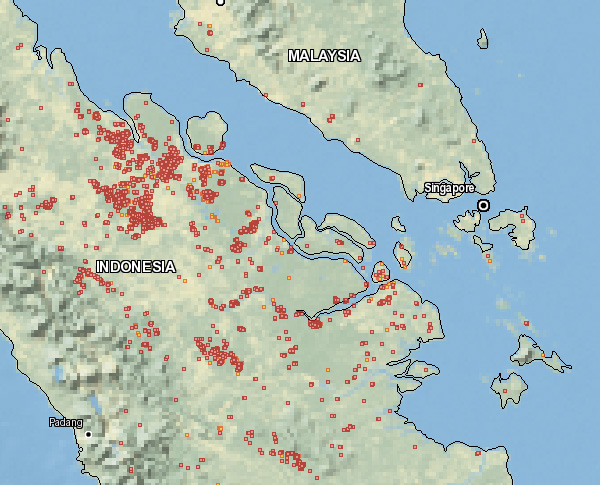 NASA MODIS fire hotspots for the past 7 days

Regardless of the origin, peat fires are particularly polluting and difficult to extinguish. Fires can smolder underground for months or even years, generating plumes of smoke and releasing large amounts of carbon dioxide into the atmosphere. Only extended rainfall — which isn’t expected until late September or early October at the end of the dry season — will ultimately put out many of the fires.

Fires and associated haze has become increasing common over the past 30 years as vast swathes of forest and peatlands — habitats generally too wet to burn on their own — have been degraded and cleared. Initially, industrial logging reduced tree cover and increased the vulnerability of forests to fires from neighboring agricultural areas and plantation zones. Later, removal of natural vegetation for oil palm and timber plantations worsened the situation by further drying the landscape and creating more ignition points for fires. Palm oil developers still regularly use fire for plantation management despite express prohibition of the practice.

In the midst of the current crisis, Indonesia says it will investigate and prosecute firms found to be illegally setting fires in Sumatra. On Friday, Kuntoro Mangkusubroto, a presidential advisor charged with reforming Indonesia’s forestry sector and implementing a program to reduce deforestation, named Sinar Mas and APRIL as two firms whose concessions are registering a large number of hotspots in Riau. Meanwhile data from the World Resources Institute identified palm growers Wilmar, Sime Darby, and Surya Dumai Group as owners of concessions where hotspots are reported.