In 2011, Olam International, a multibillion-dollar agribusiness corporation based in Singapore, purchased 3300 hectares of land in Nicuadala, Mozambique to grow rice for export. Since 2000, foreign governments and corporations have purchased or leased almost 2 million hectares of agricultural land in Mozambique. The top three investors are from Sweden (540K ha), South Africa (250K ha) and Italy (220K ha). The most common crops grown commercially are jatropha and eucalyptus.

All this information (and more) is available in less than 10 minutes and just a few clicks away on Land Matrix –
an online database of large-scale land acquisition deals.

Concerns about potential land grabs – governments and corporation purchasing high-quality agricultural land in developing countries to grow food and crops
for home – prompted this initiative by the International Land Coalition (ILC). Open access to a public database
is the first step towards preventing unfair or harmful land deals.

“This tool is not against investment – in fact we have had investors contact us to provide data. But it is against land grabbing, which is forms of
acquiring land that do not respect local land rights or involve local people in the decision-making process,” says Michael Taylor, ILC’s Global Program
Manager. 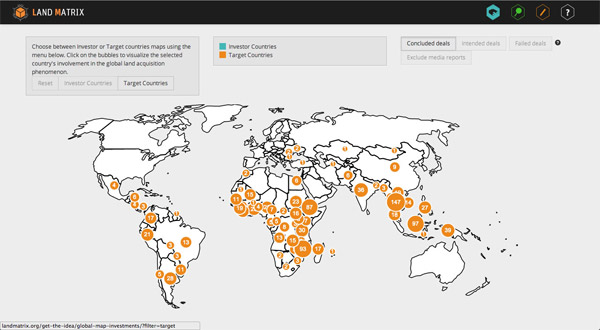 Number of concluded big land deals by country. Most of the purchased land is in the Global South.

The current situation of widespread lack of transparency in decision-making over land and investment are not in the interests of most people – in
particular those previously living off the land in question – and lead to bad decisions being taken. Greater transparency can promote better
accountability, and ultimately more inclusive decision making over such important questions.

ILC just launched a new improved version of Land Matrix. It features a user-friendly intuitive interface and browsing options. The database itself is
growing, currently providing details on more than 900 large-scale land deals. This information comes mostly from research, government and investor reports
– each traceable back to the original source. All data are free to download.

Most importantly, anybody can get involved in the project. Information is crowd-sourced in Wikipedia fashion. This means that people with on-the-ground
local knowledge can update and contribute to the database. The project even includes intended deals, that is deals which are still in the negotiation phase
and not yet legally formalized.

If you have information on large land deals (greater than 200 hectares), you can share it here. Land
Matrix is particularly looking forward to expanding the database on domestic investments in land acquisition.

This user-friendly database platform allows both for easy visualization of the entire dataset and for browsing through the small-print data.