Today in a press release for the U.N.’s World Environment Day, the Brazilian government highlighted a sharp drop in deforestation since 2012. The trouble is, the South American superpower failed to acknowledge what appears to be a sharp rise in Amazon forest loss since last year, reports Greenpeace.

In a post on the government’s official blog, Brazil congratulated itself for an 84 percent decline in Amazon deforestation between August 2011 and July 2012 relative to 2004, the year that it enacted a plan to control deforestation in the region. PPCDAM, as the program is called, includes a variety of measures, including increased law enforcement, satellite monitoring, and incentives for less damaging practices. The program is widely considered a success.

However as Greenpeace notes, deforestation has been on the rise since last year when Brazil passed a revised version of its Forest Code, which governs how much forest a private landholder must preserve. Environmentalists say the new Forest Code is less restrictive than the previous version and will spur increased rainforest clearing. 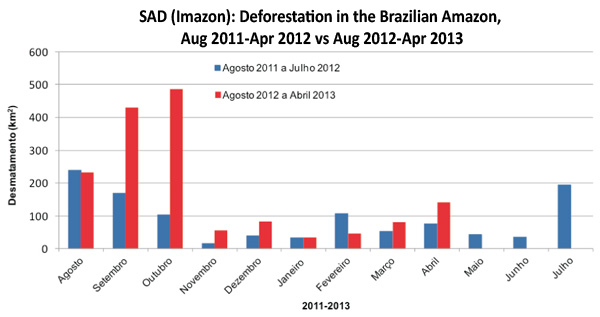 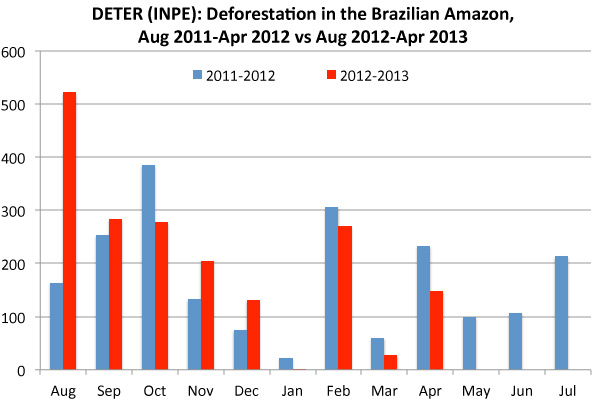 Greenpeace argues that the Brazilian government’s decision to re-release old data is a bit disingenuous given the recent uptick.

“Today, the Brazilian government is dancing to an old tune. Using World Environment Day to rerelease old deforestation figures is a cheap trick to cover up the reality that the Amazon rainforest and its people are facing increased danger.” said Paulo Adario, Strategic Advisor for Greenpeace International, in a statement. “Brazil needs to stop hiding behind the progress made in the past and face the reality that the Amazon is under increasing threat. Brazil is capable of continuing to grow economically without destroying the Amazon and its people but is falling short with plans that put the Amazon at risk.”

Data from both Brazil’s National Space Research Agency INPE and the independent NGO Imazon suggest a significant rise in forest loss since last August. Final data for the 2012-2013 year won’t be released until December after high resolution satellite images have been processed and analyzed. Deforestation Brazil is tracked on an August through July calendar corresponding to the dry season when satellites can capture the best images of the region, which is often shrouded in clouds during wetter parts of the year.