If you were to travel from the United States of America to Japan, you would most likely encounter what could be described as the world’s largest waste dump: a 100,000 tonne expanse of debris floating around a large region of the Pacific Ocean. The total area of this phenomenon has been said to equal the size of continental U.S., but the truth about its true size remains unknown.

Captain Charles Moore first discovered the ‘Pacific garbage patch’ in 1997. The area in which rubbish gets caught up is known as a gyre, which can be described as a large-scale circular feature made up of ocean currents that ultimately traps waste and moves it around the region.

Plastics constitute 90 percent of all trash in the world’s oceans with 20 percent of this waste being dumped from ships and oil platforms. The rest comes from land.

Plastic is of course, a very useful product; durable and stable, yet it is these very properties that deem it troublesome in marine environments.

“The polypropylene and the polyethylene that make up the majority of floater plastics and consumer plastics are just a little bit lighter than water. So if it’s rough they get pushed down under. When it’s really calm, all these bits and pieces can float to the surface,” Charles Moore told the Earth Island Journal.

To Moore, it is clearly a land-based problem and he believes that what drives the market and what subsequently runs off the streets into our oceans is all part of the same problem.

A one-liter plastic bottle, when in seawater, can reduce to so many small pieces that it is possible a single fragment could be found on every beach in the world. The entire marine food-web is suffering as a result. The breakdown of plastics into small pieces allows them to mimic the prey of all marine animals, from zooplankton to whales. When plastic is so prevalent that it fills up a creature’s stomach, it turns off the desire to feed. If an organism doesn’t put on fat stores for reproduction and migration, its population will crash. Floating plastic will even act as transport for some organisms, introducing them to areas where they could be problematic to resident species.

Seventy percent of the plastic waste sinks to the ocean floor and this mass of waste causes considerable damage to bed-dwelling organisms. In the worst case scenario—suffocation.

Plastics are also very good sponges, as such they are often used in oil clean-ups. But Moore explains that “petroleum-derivative toxins are sticking to these plastics, delivering these toxicants to marine creatures from the very base of the food-web to the top, in addition to killing millions by entanglement”.

According to the UN Environment Program (UNEP), over one million seabirds and one hundred thousand marine mammals and turtles are killed as a result of plastic ingestion or entanglement.

Marcus Eriksen, a research director at the US-based Algalita Marine Research Foundation, also highlighted the threat plastic waste poses to human life. He told the Telegraph in 2008 that “such pollutants can attract man-made chemicals such as hydrocarbons and the pesticide DDT,” adding that “what goes into the ocean goes into these animals and onto your dinner plate. It’s that simple”.

Solutions to this problem are not immediately clear. A cleaning strategy would cost vast amounts of money due to the immense area in question and the unpredictability of the highest concentrations of waste. Of course, the reduction of waste on land is really where strides can be made and recycling will go a long way to suppress the situation. 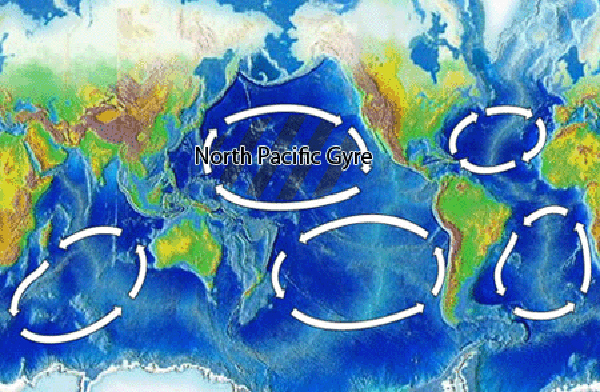 (04/24/2013) Just 9% of the millions of tonnes of fish caught by China’s giant fishing fleet in African and other international waters is officially reported to the UN, say researchers using a new way to estimate the size and value of catches. Fisheries experts have long considered that the catches reported by China to the UN’s Food and Agriculture Organization (UNFAO) are low but the scale of the possible deception shocked the authors.

(04/15/2013) Fishing is not a woman’s domain in most countries across the globe. In parts of India there are fishing communities who believe that having a woman onboard a fishing boat brings bad luck. Despite this, Divya Karnad, a scientist who studies marine life in India, has spent several years studying fisheries and their impact on species like sharks and sea turtles. Her work forms a part of global efforts to track declining marine species and encourage more sustainable fishing.

(03/27/2013) In recent journeys to Madagascar, New Caledonia, Vanuatu, the Philippines, and French Polynesia, scientists from the Centre for Advanced Studies of Blanes and the University of Barcelona have discovered not only five new crustaceous species, but also the existence of a new genus in the family.