Dutapalma Nusantara, which is also known as Darmex Agro or Duta Palma, was found to have violated three RSPO principles: converting deep peat for a plantation, clearing forest without a high conservation value (HCV) assessment, and using fire to open land. The company repeatedly failed to address the issues, which were raised by the Indonesia Community Mapping Network via RSPO’s complaint system.

“The Executive Board finds that PT Dutapalma Nusantara / PT Darmex Agro have not
demonstrated commitment to address the issue nor acted in compliance with the Code of
Conduct,” said the RSPO in a statement posted on its web site. “Despite numerous directives from the RSPO to resolve the complaint, there was
complete reticence and lack of response from the company. The company merely attempted to
refute the allegations by using the issue of ownership of the companies involved.”

“Therefore, the Executive Board has decided to terminate the RSPO membership of PT
Dutapalma Nusantara and PT Darmex Agro with immediate effect on the grounds indicated
above. In concurrence with this, PT Dutapalma Nusantara/PT Darmex Agro must remove all
references to the RSPO on its website and from all other communication in whatever form within
seven (7) days from the date of this letter.” 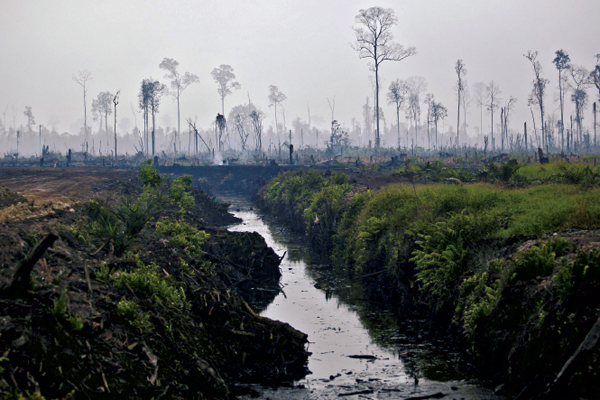 The move comes less than three weeks after a Greenpeace cited Duta Palma as a case study for the failings of the RSPO to prevent deforestation. When the report was released, RSPO implied that action against Duta Palma was imminent.

Greenpeace has been investigating Duta Palma since 2007 and its Indonesian branch has done a series of colorful campaigns against the company over that period for alleged abuses. Duta Palma has faced several government investigations during that time, the results of which have never been made public, according to Greenpeace.

Duta Palma says it is one of the largest palm oil companies in Indonesia, producing some 432,000 tons of crude palm oil annually, according to its web site. It has at least 155,000 ha of plantations in Riau and Jambi in Sumatra and West Kalimantan in Indonesian Borneo.

Duta Palma has not replied to multiple requests for comment from Mongabay.com.

(05/13/2013) Indonesian palm oil giant Golden Agri-Resources (GAR) is continuing to reduce deforestation under its 2011 forest conservation policy despite ongoing forest destruction by other palm oil producers in the sector, finds a new assessment by Greenomics, an Indonesian activist group. However the report finds GAR’s operations are not completely deforestation-free.

(04/25/2013) Environmentalists are unhappy with Thursday’s approval of new criteria for the world’s leading palm oil certification standard. After members of the Roundtable on Sustainable Palm Oil (RSPO) in a special assembly approved the body’s new ‘principles and criteria’ (P&Cs) for palm oil certification, several groups voiced concern that the rules won’t protect against conversion of carbon-dense rainforests and peatlands for oil palm plantations.

(04/25/2013) A major Indonesian palm oil producer continues to clear rainforests in Sumatra despite being a prominent member of the Roundtable on Sustainable Palm Oil (RSPO), casting doubts on the body’s effectiveness in limiting deforestation, alleges a new report from Greenpeace.

(04/23/2013) An initiative that aims to improve the social and environmental performance of palm oil production is faltering in its mission by failing to establish strong performance standards on greenhouse gas emissions and pesticide use, argues a new statement issued by WWF, the initiative’s biggest green supporter.