The Greater Mekong region of Cambodia, Laos, Myanmar (Burma), Thailand and Vietnam will lose a third of its remaining forest cover by 2030 unless regional governments improve management of natural resources and transition toward a greener growth model, warns a new report issued by WWF.

The report lays out two scenarios for the Greater Mekong. The first is a business-as-usual approach which relies on continued degradation of its forests and freshwater ecosystems. The second is based on a greener economic model that emphasizes the importance of services afforded by healthy ecosystems, translating to a 50 percent drop in annual deforestation and an increase in protected and more sustainably-managed areas.

“The Greater Mekong is at a crossroads,” said Peter Cutter, Landscape Conservation Manager with WWF-Greater Mekong. “One path leads to further declines in biodiversity and livelihoods, but if natural resources are managed responsibly, this region can pursue a course that will secure a healthy and prosperous future for its people.” “The green economy approach is the choice for a viable future in the Greater Mekong. Regional leaders have already affirmed that healthy economic growth goes hand in hand with healthy and productive ecosystems, but fast and effective responses are needed now to avoid permanent environmental degradation.”

The two sharply contrasting forecasts are based on analysis of trends in the region. WWF estimates that between 1973 and 2009, the Greater Mekong countries lost nearly a third of their forest cover, led by Thailand and Vietnam which each cleared more than 40 percent of their forests. Cambodia, Laos, and Myanmar lost nearly a quarter of their forests during the interval. Old-growth forests have been nearly wiped out in Vietnam, while declining steeply in other countries. 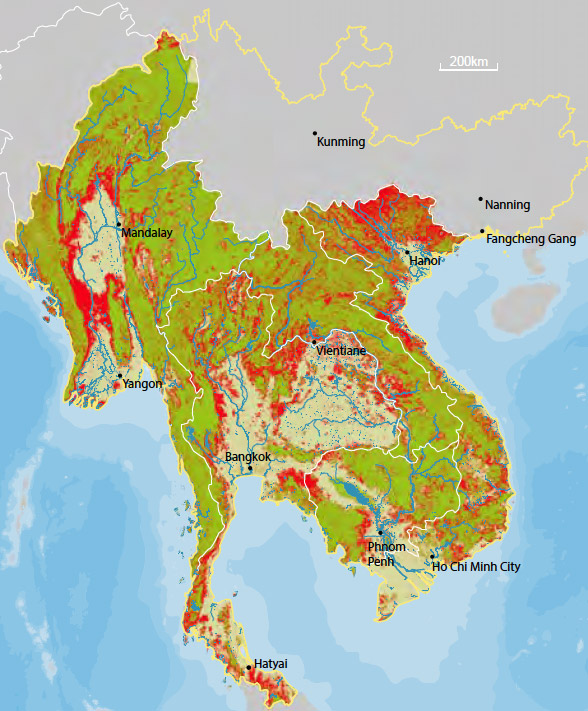 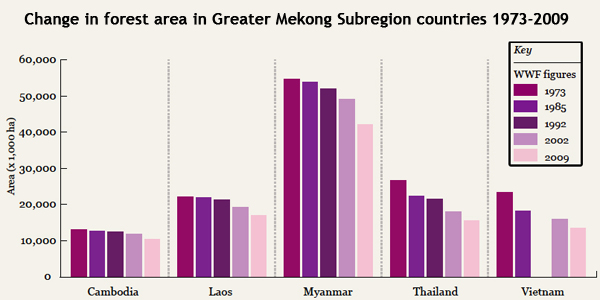 Meanwhile a series of dams planned for the Mekong River and its tributaries could disruption fish migration and nutrient flows, potentially wreaking havoc on local livelihoods.

“Decision-makers in the Mekong river basin face a difficult dilemma: how can
countries that share the freshwater resources of the Mekong River profit from a
renewable energy source such as hydroelectric power without at the same time
degrading the fisheries and ecological services that support at least 60 million
people?” aks the report. “To produce energy through hydropower, up to 11 new dams are planned for
the main stem of the Lower Mekong River alone. Their construction will negatively
impact both wild fish populations and the
many people who rely on wild fish as their major source of protein.”

The report also tracks decline in regional biodiversity, including several charismatic species like the tiger, Asian elephant, Irrawaddy dolphin and the endemic saola. It says ongoing fragmentation, degradation, deforestation, and poaching could leave some wild populations of these animals on the brink of extinction in the region. WWF adds that regional governments are too often failing to maintain protected areas or take effective action against illegal logging.

“Many protected areas exist in name only,” said Cutter. “Even relatively secure protected areas are under intense pressure from poaching and timber theft, while others have been reduced in size by government’s eager to cash in on land concessions to mining companies or plantation owners.” Deforestation for a rubber plantation in Lao PDR