The market for carbon credits generated from projects that reduce deforestation and forest degradation — a climate change mitigation approach known as REDD+ — dipped eight percent in 2012 according to an annual assessment of the global voluntary carbon market.

The report, published by Ecosystem Marketplace and Bloomberg New Energy Finance and slated to be released next month, found that overall demand for voluntary carbon credits rose four percent in 2012, with buyers offsetting 101 million metric tons of greenhouse gas emissions. Buyers paid $523 million for those credits, or 11 percent less than they spent in 2011. The average price per ton of carbon dioxide emitted fell five percent from $6.20 to $5.90.

Voluntary carbon credits are used by governments, companies, and individuals to offset their emissions as an act of goodwill or for marketing purposes. By definition, the credits don’t qualify FOR cap-and-trade systems or other regulatory frameworks for limiting carbon emissions. 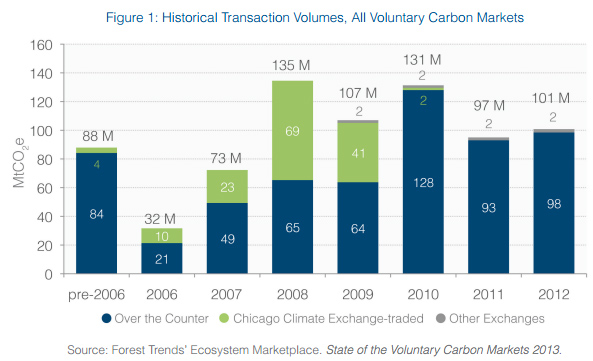 The voluntary market has held up better than Europe’s compliance market for carbon credits, which crashed in 2012 due to oversupply.

While the market for REDD+ credits contracted in 2012, the report found that demand for credits certified under leading certification standards — specifically the the Verified Carbon Standard (VCS) and the Climate, Community and Biodiversity (CCB) Standards — expanded during the year. Overall, REDD+ and avoided conversion projects amounted to 9 percent of the total volume of voluntary carbon credits transacted during 2012.

REDD+ aims to create financial incentives to keep forests standing as functional ecosystems rather than having them cleared for timber, fuel, or agriculture. While the concept seems simple, developing and implementing the mechanism has been fraught with difficulties, including lack of secure land rights in tropical countries; concerns over corruption, benefits distribution, and fraud; governance challenges; and worries about perverse social and environmental outcomes. Accordingly, REDD+ has been slow to move forward. Only a handful of projects have been validated and verified under the most stringent standards. 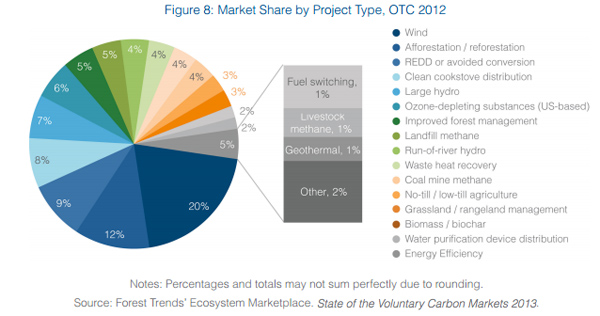