The opening of the International Hydropower Association (IHA) World Congress in the Malaysian state of Sarawak was marred today by indigenous protests and controversy after a local indigenous leader was barred from attending a pre-conference workshop. Over 300 people from local indigenous people protested the ongoing construction of around a dozen mega-dams in the state that threaten to flood traditional lands, force villages to move, and upend lives in the state. The Sarawak hydropower plans are some of the most controversial in the world—making the choice of Kuching, Sarawak for the IHA meeting an arguably ironic one—with critics contending that the dams are have been mired in political corruption, including kickbacks and bribes. IHA brings together dam builders, banks, and various related organizations worldwide every two years.

“We were not given a voice inside the congress so we are using our voices here in the form of a protest,” said Mark Bujang, Secretary with the SAVE Rivers network, a coalition of indigenous leaders and groups opposed to the hydropower plans in Sarawak.

Even before the conference started, Peter Kallang the chairman of SAVE Rivers, was barred from attending a pre-conference workshop despite paying $1,750 to participate. According to a Kallang he was not allowed to attend due to letters he wrote criticizing the IHA for excluding affected indigenous people and cooperating with the Sarawak government. 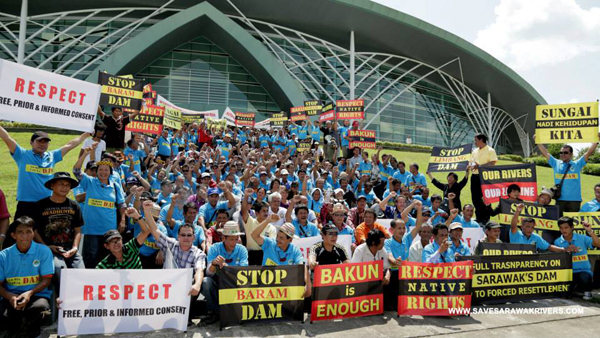 “To ensure that there is at least some platform for indigenous and critical voices, SAVE Rivers is holding an alternative conference
tomorrow 23rd May at the Riverside Majestic Hotel,” Kallang said in a statement. “I would like to take this opportunity to invite all
delegates and journalists at this conference to attend ours to hear frank and honest stories from affected peoples.”

Sarawak is currently planning around a dozen dams to be built over the next decade, although the Malaysian state already produces more power than it uses.

Controversial dams include the planned 900-megawatt Murum Dam, which will flood 24,500 hectares of indigenous lands and force the resettlement of seven communities. Construction of the dam was blockaded by Penan people last year. The Penan also allege that Sarawak Energy Berhad (SEB), which is building the dam, has destroyed historical and sacred sites. Meanwhile, the planned 1,200-megawatt Baram dam will flood 40,000 hectares of primary rainforest and is expected to displace 20,000 people.

“We know the government plans on building a dam in the Baram area. Our ancestral lands will be flooded, and we will lose our land and livelihoods,” Johannes from Long San, Baram said. “We have learned from Bakun and Murum dams. The government only think about to make money with the dams but they don’t care about us. We want development but not dams.”

Construction was finished on the 2,400 megawatt Bakun Dam in 2011. The massive hydropower project forced the removal of 10,000 indigenous people and flooded a forest area the size of Singapore. To date, environmental impact assessments of the dams have not been published publicly.

Critics contend that corruption may be fueling the dam spree as well. Sarawak’s Chief Minister Abdul Taib Mahmud has been under investigation by the Malaysian Anti-Corruption Commission (MACC) for alleged timber corruption since 2011. According to the Bruno Manser Fund, Taib is worth $15 billion; the group contends that the Prime Minister has used corruption to enrich himself and his family for decades. 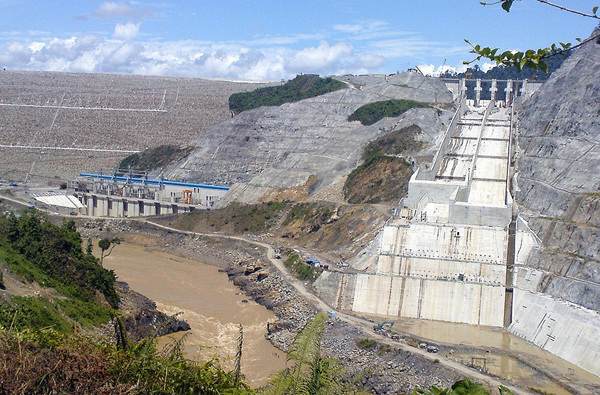 Bakun Dam under construction in 2009. Photo by: Mohamad Shoox/Creative Commons 2.0.

During his opening speech, Richard Taylor executive director of IHA, said that the congress was “working to advance sustainable hydropower.” The meeting was co-organized by several financial institutions including the World Bank, the International Finance Corporation (IFC), the Asian Development Bank (ADB) and the Inter-American Development Bank (IDB).

“It is an absolute scandal that the IHA has chosen the Taib family’s Borneo Convention Centre for their congress,” said Bruno Manser Fund director, Lukas Straumann in a statement. “The congress center’s operators are the very same people who are the main beneficiaries of Sarawak’s corruption-driven dam plans.”

Dams have long been touted as sustainable clean energy. However their environmental impacts are well documented: including fishery declines, loss of biodiversity, and re-routing river systems. In addition, research over the last decades has shown that dams in the tropics can produce massive emissions of methane—a greenhouse gas far more potent in the short-term than carbon—as vegetation rots in reservoirs. Depending on the construction and design of the dam, hydropower projects are capable of releasing as much greenhouse gases as coal plants in the first few decades.

Dam-building has become a increasingly contentious issue as many rising nations—such as Brazil and Turkey—turn to dams for increasing power needs, but face opposition due to social and environmental impacts. Still, the World Bank has recently signaled it will begin making a major push to build massive dams worldwide, as reported by the Washington Post. Many environmental and social groups have argued that the World Bank needs to move away from massive centralized projects to smaller-scale, locally-approved development. 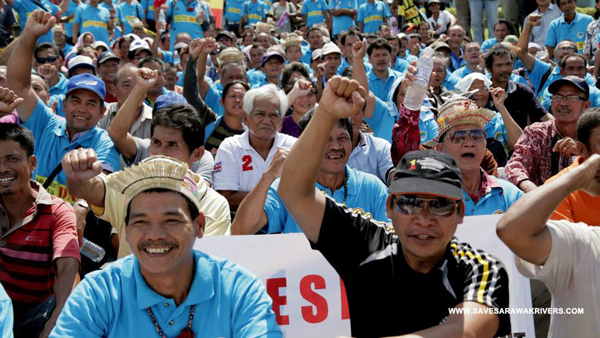 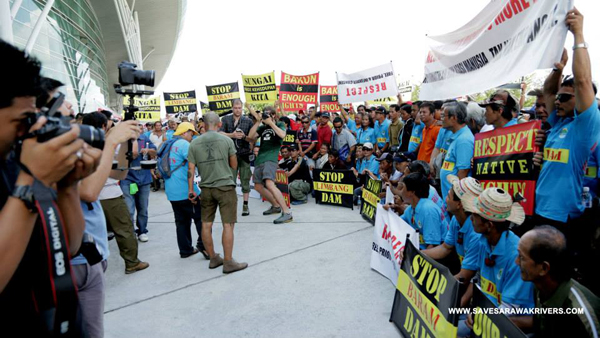 (09/27/2012) Originally refusing to provide funding to Ethiopia’s controversial Gibe III hydroelectric dam, the World Bank has now announced plans to fund the power lines that will carry generated electricity away from it. In their official statement they report that the lines will “connect Ethiopia’s electrical grid with Kenya’s, create power-sharing between the two countries, reduce energy costs, promote sustainable and renewable power generation [and] better protect the region’s environment…eventually benefiting 212 million people in five countries.”

(05/13/2013) In an unusual bid to stop a series of dams that will flood their rainforest home, a group of tribesmen in Borneo are urging King Harald V of Norway to call one of his subjects home. The subject is Torstein Dale Sjøtveit, a Norwegian citizen who is the CEO of Sarawak Energy, a Malaysian firm that is building several dams in the state of Sarawak. The hydroelectric projects are controversial because they require the forced displacement of indigenous communities and will flood large tracts of rainforest.

(05/03/2013) On Thursday roughly 200 indigenous people launched an occupation of a key construction site for the controversial Belo Monte dam in the Brazilian Amazon. The protestors, who represent communities that will be affected by the massive dam, are demanding immediate suspension of all work on hydroelectric projects on the Xingu, Tapajós and Teles Pires rivers until they are properly consulted, according to a coalition of environmental groups opposing the projects.

Featured documentary: Damocracy, highlighting the battles over the Belo Monte and Ilisu dams

(04/29/2013) A new short documentary highlights the battles over monster dam projects imperiling local people and wild rivers. Examining the Belo Monte dam in Brazil and the Ilisu dam in Turkey, the documentary argues that such hydroelectric projects cannot be deemed “green” energy as they overturn lives, livelihoods, and ecosystems.