HSBC orders review of its lending to rainforest logging companies

Following allegations that it has been financing land-grabbing of indigenous territories and destruction of rainforests in Malaysian Borneo, HSBC said it will conduct an audit of its relationships with logging companies to see whether its lending has violated the bank’s environmental policy.

In a statement issued Thursday, HSBC said it will engage environmental auditor Proforest to evaluate its forest policy and commission PricewaterhouseCoopers to conduct a compliance review of the bank’s implementation of the policy.

The announcement is a response to a Global Witness report that linked HSBC to companies that have been clearing rainforests in Sarawak, a state in Malaysian Borneo, for timber and palm oil production. HSBC says it has already cut ties to 68 clients in Malaysia because their activities are not in compliance with its sustainability policy.

But Bill Oddie, a British entertainer who has joined the Global Witness campaign and has made a film to highlight the bank’s links to logging, expressed skepticism about HSBC’s commitment.

“It’s hard to get excited about a limited review of an opaque policy sold to the public as a serious commitment to the world’s forests,” said Oddie, in a statement. “We want Stuart Gulliver [HSBC CEO] to make an unambiguous commitment that HSBC will never bankroll companies logging or clearing natural tropical forests, and then to put credible measures in place to show its customers and shareholders that it is serious about delivering on that commitment.” 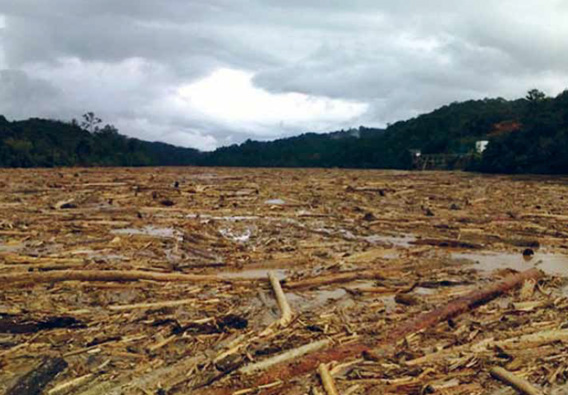 The ‘logjam’ on the Rajang river, Sarawak, October 2010. The 50km-long logjam occurred downriver from an area logged by WTK group, an HSBC client.

HSBC, one of the world’s largest banks, established a “Forest Land and Forest Products Policy” in 2004. The bank says it was one of the first banks to launch such a policy.