Bears do it, bats do it, and now we know lemurs do it too: hibernate, that is. Since 2005, scientists have known that the western fat-tailed dwarf lemur hibernates, but a new study in Scientific Reports finds that hibernation is more widespread among lemurs than expected. At least two additional lemur species—Crossley’s dwarf lemur and Sibree’s dwarf lemur—have been discovered hibernating. So far lemurs, which are only found on the island of Madagascar, are the only primates known to undergo hibernation, raising curious questions about the relationship between lemur hibernation and more well-known deep sleepers.

“To the casual observer, it looks for all the world as if the animals are dead. Their bodies are cold, they are utterly still and they take a breath only once every several minutes or so,” says co-author Anne Yoder, director of the Duke Lemur Center, of the Crossley’s and Sibree’s dwarf lemurs.

The discovery that fat-tailed dwarf lemurs (Cheirogaleus medius) hibernate was surprising for various reasons. Not only was it the only primate at the time known to hibernate, but it was the only tropical mammal. Like mammals to the north, fat-tailed dwarf lemurs seemingly hibernate to avoid resource-scarce periods, though in this case it’s not due to winter. Instead the lemurs hibernate for up to seven months during the hot and dry season when food and water are nearly impossible to find. Interestingly, their body temperatures fluctuate widely while they hibernate, depending on the insulation in their tree holes.

But Crossley’s dwarf lemur (Cheirogaleus crossleyi) and Sibree’s dwarf lemur (Cheirogaleus sibreei) hibernate more traditionally, i.e. due to the cold. Living in high-altitude forests, where temperatures occasionally dip below freeing, these two lemur species burrow into the rainforest floor. Like most other hibernators, their body temperatures drop and stabilize while their heart rate slows. Using radio collars that measure temperatures, the scientists were able to track the dwarf lemur hibernation patterns.

“Maybe these lemurs, though they live in the tropics, look more like temperate hibernators than we thought,” says lead author Marina Blanco a postdoctoral researcher also at the Duke Lemur Center. Hibernation still remains a baffling topic among scientists with many mysteries.

Scientists have also found that various species of mouse lemurs go into a hibernating-like state known as a torpor.

There are over a hundred species of lemur, most of which were discovered since the 1990s. Scientists are only beginning to uncover the many secrets of these distinct primates. 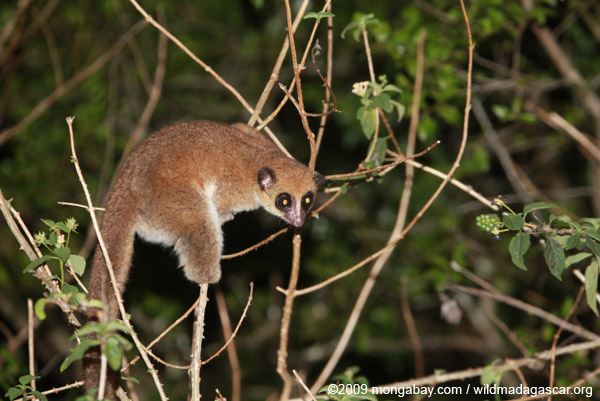 (04/03/2013) A new film Nosy Maitso takes a look at the people, researchers, and wildlife connected to Madagascar’s Ranomafauna National Park. Apart of a World Heritage Site, the park was established in 1991 after a new species of lemur, the golden bamboo lemur (Hapalemur aureus), was discovered in its forests in the 1980s. The golden bamboo lemur is currently listed as Endangered by the IUCN Red List.

(03/27/2013) Scientists have discovered two new species of mouse lemurs in Madagascar, bringing the total number of diminutive primates known to science to 20.

(03/26/2013) Scientists sequenced the genome of the aye-aye, a bizarre lemur species, for the first time. The research is published in the journal Proceedings of the National Academy of Sciences (PNAS).

(02/27/2013) The promise of lemurs, lizards, and a bouquet of biodiversity brought mongabay.com founder Rhett Butler to Madagascar sixteen years ago. He was not disappointed by what he found and was inspired to return, many times to experience the wildlife, landscapes, and people of the dynamic island. In 2004, Rhett founded wildmadagascar.org, a site that highlights the spectacular cultural and biological richness of Madagascar and reports on environmental news for the Indian Ocean island nation.

(12/12/2012) Poaching is a major threat to endangered lemurs in some parts of Madagascar, but a group has come up with an innovative solution to the problem: replace lemur meat with silkworm pupae, a byproduct of silk production.

(12/03/2012) As a small-brained and largely solitary primate, the gray mouse lemur (Microcebus murinus) wasn’t supposed to have the capacity to distinguish the calls of its kin calls from other lemurs. However, a new study in BMC Ecology, finds that a female gray mouse lemur is able to determine the mating calls of its father, allowing it avoid inbreeding. The discovery challenges the long-held belief that only large-brained, highly social animal are capable of determining kin from calls.

(11/13/2012) Madagascar’s greater bamboo lemur has been removed from the list of the world’s 25 most endangered primates after conservationists discovered previously unknown populations of the rare creature, according to the Aspinall Foundation, a charity that set in motion a species survival plan for the lemur.

(08/17/2012) Madagascar officially designated its largest protected area in a region renowned for its tropical rainforests and rich diversity of wildlife, including 20 species of lemurs, reports the Wildlife Conservation Society (WCS), a group that was instrumental in establishing the park. Makira Natural Park covers some 372,470 hectares of forest in northeastern Madagascar, the most biodiverse part of the island nation.