A new 200-page-report by the UN Food and Agriculture Organization (FAO) urges human society to utilize an often-ignored, protein-rich, and ubiquitous food source: insects. While many in the industrialized west might turn up their noses at the idea of eating insects, already around 2 billion people worldwide eat over 1,900 species of insect, according to the FAO. Expanding insect-eating, the authors argue, may be one way to combat rising food needs, environmental degradation, and climate change.

“It is widely accepted that by 2050 the world will host 9 billion people. To accommodate this number, current food production will need to almost double. Land is scarce and expanding the area devoted to farming is rarely a viable or sustainable option. Oceans are overfished
and climate change and related water shortages could have profound implications for food production,” the report reads. “To meet the food and nutrition challenges of today—there are nearly 1 billion chronically hungry people worldwide—and tomorrow, what we eat and how we produce it needs to be re-evaluated.”

Entomophagy, or insect-eating, may be one possible solution. Eating insects, farming insects, and turning insects into feed for livestock are three ways in which the largely-terrestrial arthropods could mitigate both growing food demand and environmental damage, according to the report. Currently, most insects are eaten directly from the wild or raised in small cottage industries, but the report urges research into scaling up insect farming for food.

“Insects are not harmful to eat, quite the contrary. They are nutritious, they have a lot of protein and are considered a delicacy in many countries,” Eva Muller, the Director of FAO’s Forest Economics, Policy and Products Division, said in a statement.

Indeed, the report argues that insects—rich in fats, iron, and zinc, as well as protein—could become a healthy replacement for more mainstream meats, such as beef, chicken, and fish. The environmental benefits are huge: insect-farming would likely produce far fewer greenhouse gas emissions than traditional livestock (for example only a few insect types produce methane). For example, pig farming produces 10-100 times more greenhouse gases per kilogram than raising mealworms.

Insects are also hugely efficient: on average insects require only 4.4 pounds (2 kilograms) of food to produce 2.2 pounds (1 kilogram) of meat, while cattle requires 17.6 pounds (8 kilograms) for the same amount of meat.

Perhaps most importantly insect farming would not require clearing of additional lands, which would undercut greenhouse gas emission due to deforestation, preserve threatened biodiversity, and decrease on-going land conflicts.

Despite, these benefits, the report admits that it would be difficult getting people, especially in the west, to eat insects.

“People in most Western countries view entomophagy [i.e. insect-eating] with feelings of disgust. It is safe to say that most are reluctant to even consider eating insects and, moreover, that they perceive the practice to be associated with primitive behavior,” the report reads.

The report notes that actions are already underway to document the nutritional value of various edible insects, research the environmental benefits, and develop an international legal framework. In addition, the report urges more development into insect eating, especially farming insects. 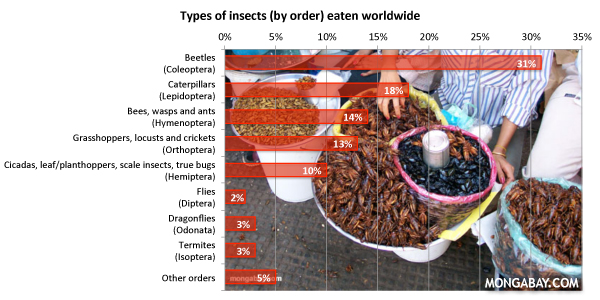 Edible insects for sale at market in Cambodia. Photo by Rhett A. Butler. Click image to enlarge.

“Farming insects has a huge global potential for both animal feed and food production. We are already seeing producers creating animal feed from insects and research. And development is occurring around the world in order incorporate insects into menus and processed foods,” Afton Halloran, a consultant for the FAO Edible Insects Program, noted.

Muller says that the major barrier to insect-eating—the disgust factor—can be overcome within time.

“We have already seen cookbooks show up that offer recipes on edible insects, and there are a few restaurants in capital European cities that actually offer edible insects on their menus,” she says. “I don’t expect it to be something that happens very quickly, but if we remember that 20 years ago nobody in Europe would think of eating raw fish, and everybody now loves sushi, things can change, so even the cultures that are not used to eating insects may eventually develop a taste for them.” 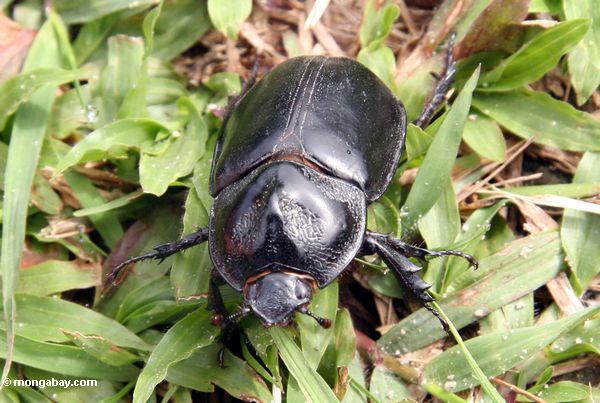 Large black beetle in Borneo. Beetles are the most commonly consumed insects, making 31 percent of the types of insects eaten. Photo by: Rhett A. Butler.

(05/07/2013) It is hard to think of a more unlikely setting for genetic experimentation or for raising salmon: a rundown shed at a secretive location in the Panamanian rainforest miles inland and 1,500m above sea level. But the facility, which is owned by an American company AquaBounty Technologies, stands on the verge of delivering the first genetically modified food animal—a fast-growing salmon—to supermarkets and dinner tables.

6 lessons for stopping deforestation on the frontier

(04/09/2013) In 1984, at the tail end of the Brazilian dictatorship, I took up residence in a frontier town called Paragominas in the eastern Amazon. I went to study rainforests and pasture restoration, but soon became captivated as well by the drama of the frontier itself. Forests were hotly contested among cattle ranchers, smallholder communities, land speculators and more than a hundred logging companies, sometimes with fatal results. If we are to meet rising global demand for food, conserve tropical forests, and mitigate climate change at the pace that is necessary, we must become much better at taming aggressive, lawless tropical forest frontiers where people are making a lot of money cutting forests down.