Commentary by Zach Fitzner on 2 May 2013

Equatorial Guinea is not a country that stands very large in the American consciousness. In fact most Americans think you mean Papua New Guinea when you mention it or are simply baffled. When I left for Bioko Island in Equatorial Guinea, I also knew almost nothing about the island, the nation, or the Bioko drills (Mandrillus leucophaeus poensis). The subspecies of drill is unique to Bioko Island and encountering them was an equally unique experience. I initially went to Bioko as a turtle research assistant but ended up falling in love with the entire ecosystem, especially the Bioko drills as I tagged along with drill researchers.

Bioko itself looks a bit like a bean; if the bean was 779 square miles, made out of dormant volcanoes, covered in lush rainforest and floating in the Atlantic off Africa’s west coast that is. The island is part of the Cameroonian line, a chain of dormant volcanoes extending west from the mainland. Ten thousand years ago rising sea levels cut off a peninsula, creating Bioko, which is the main island of Equatorial Guinea, a small Spanish-speaking nation in equatorial, western Africa. Bioko has a population of about 260,000 spread throughout some 26 cities arranged mostly near the coast. But Bioko is also a refuge for wildlife, including seven species of monkey and eleven subspecies, hidden away in the rough interior of the island. Wildlife biodiversity and endemism (species found only on the island) are high because Bioko is in the tropics, and an island with a relatively low human population. The Bioko drill is arguably the island’s flagship species.

“The Bioko Island drills are one of the largest, rarest and least studied primates in the world. Other than captive individuals, little is known about the drills, their behavior and their ecology,” Justin Jay of the Bioko Biodiversity Protection Program’s Drill Project told mongabay.com.

Indeed, only the very basics are known about the Bioko drill, which is a subspecies endemic to the island. Although drills are related to baboons and look very similar, they are more closely related to mandrills. Once thought to be baboons, the drill and mandrill now occupy their own genus Mandrillus. About the mandrill Charles Darwin said in The Descent of Man, “no other member in the whole class of mammals is colored in so extraordinary a manner as the adult male mandrills”. 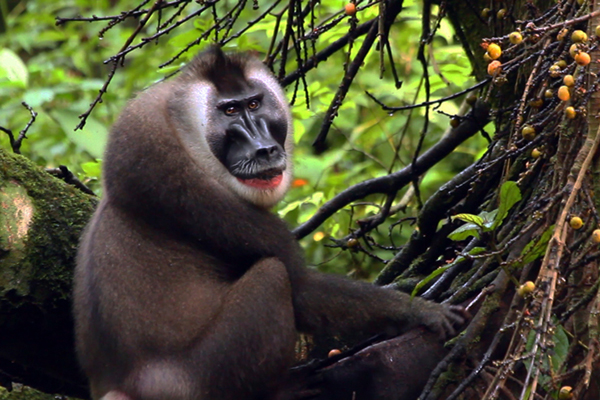 Together, drills and mandrills are the world’s largest monkeys, and drills are just as colorful as mandrills. Drills have brightly colored genitals, no doubt to attract members of the opposite sex. They are far too large to spend much time in trees; instead they mostly walk on the ground in the style of their relatives the baboons. They have dark, angular faces with intelligent eyes and frightfully impressive canines. Drills lack the tails that most people associate with monkeys and are more reminiscent of great apes than capuchins. Beyond this we know from observation that the drills eat fruit consisting of mostly figs as well as arthropods and other food when the opportunity strikes. From captivity we know they have rich social live, including some interesting details glimmering in the darkness of ignorance: for instance, drills are one of the few primates where a smile, as in humans, is friendly. Still, these are mainland drills observed in captivity, not Bioko drills, so no one knows if what is observed in zoos applies to Bioko drills.

Drills have been observed by scientists on Bioko since Gail Hearn first visited it with two primatologists in 1990, only to find the second highest density of primates in Africa. Since then, they’ve been observed for abundance and behavioral research almost continuously, but still much remains unknown. Besides the very basics of their natural history, we know Bioko Island drills are endangered.

“The continually declining Bioko Island drill population is currently being hunted for the commercial bushmeat trade at an alarming rate; in the past 3 years over 4,500 drill carcasses have been sold in the Island’s illegal bushmeat market,” reads the drill project website.
The entire range of all drills is smaller than the size of West Virginia, but the range of Bioko drills is an even smaller subset. With facts like this it’s hard not to be discouraged about the future of such a distinct primate as the Bioko drill.

Near the end of my time in Bioko, Justin Jay and Adam Spencer, bringing camera equipment for the drill project stayed in our camp. Their goals were to capture new footage of the drills and forest as well as track the drills and discover their nest sites, something never before observed in the wild. The heart of the drill project, began in 2010 by Justin Jay and Shaya Honarvar, is to bring something of the experience of seeing these animals in the wild to the living rooms and classrooms of as many people as possible. The project is about
capturing footage of drills, creating quality documentaries and spreading the word and film.

“Our work is important because it utilizes mass media as a means to disseminate the information needed for the conservation of the drills and other primates,” Jay and Honarvar explain. “Our message is a positive one, highlighting the beauty of Bioko Island to share with the people who call the island home. By instilling pride for their unique natural heritage and empathy for wildlife we hope that ultimately, the people and government of Equatorial Guinea will take on the responsibility of conserving its own wildlife. Only until this happens will the drills be set on the path towards recovery and away from extinction.”

The importance of the project is not just in gathering the hard facts on natural history or ecology but in spreading awareness and appreciation of a monkey most people have never heard of.

Preview of film on the Bioko drills. 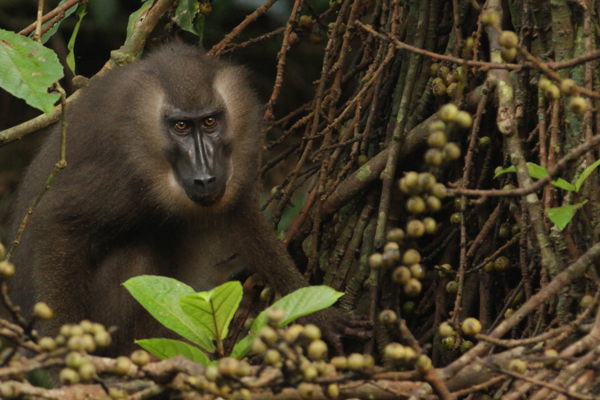 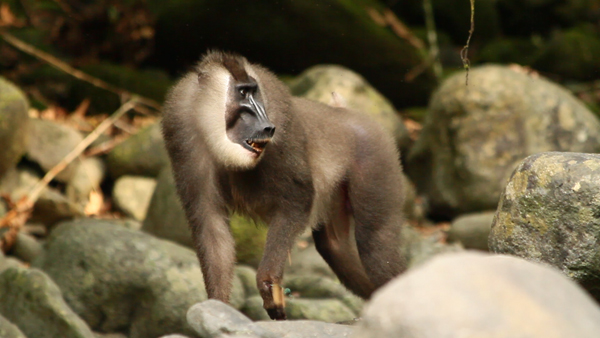 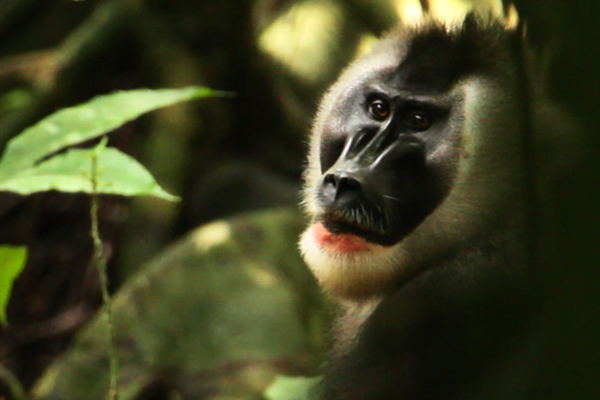 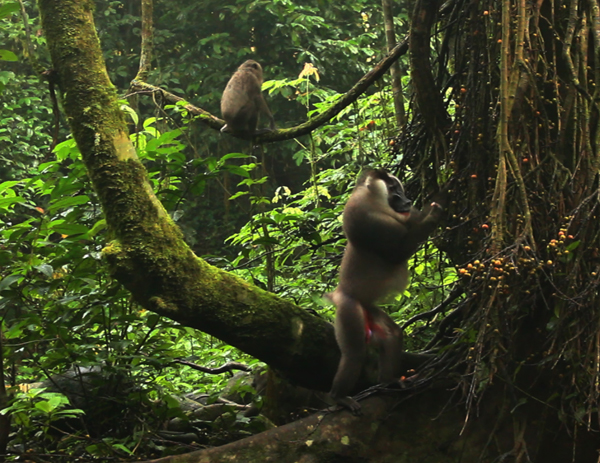 (03/26/2013) Scientists sequenced the genome of the aye-aye, a bizarre lemur species, for the first time. The research is published in the journal Proceedings of the National Academy of Sciences (PNAS).

Warlords, sorcery, and wildlife: an environmental artist ventures into the Congo

(02/25/2013) Last year, Roger Peet, an American artist, traveled to the Democratic Republic of Congo (DRC) to visit one of the world’s most remote and wild forests. Peet spent three months in a region that is largely unknown to the outside world, but where a group of conservationists, headed by Terese and John Hart, are working diligently to create a new national park, known as Lomami. Here, the printmaker met a local warlord, discovered a downed plane, and designed a tomb for a wildlife ranger killed by disease, in addition to seeing some of the region’s astounding wildlife. Notably, the burgeoning Lomami National Park is home to the world’s newest monkey species, only announced by scientists last September.

(02/13/2013) A new study purporting to uncover DNA evidence for Bigfoot has been published today in DeNovo Scientific Journal. While Bigfoot-enthusiasts have long argued that the cryptic monster is an unidentified ape species, the new study says their genetic evidence shows the Sasquatch is in fact a hybrid of modern human females mating with an unidentified primate species 13,000 years ago. The only problem: the journal in which the study is published—DeNovo Scientific Journal—appears to have been created recently with the sole purpose to publish this study.

(01/26/2013) An important population of critically endangered Sulawesi black macaques (Macaca nigra) is showing signs of recovery after years of decline in an Indonesian forest reserve, reports a study published in the January issue of the American Journal of Primatology.