Many people still believe the Tasmanian tiger (Thylacinus cynocephalus) survives in the wilds of Tasmania, even though the species was declared extinct over eighty years ago. Sightings and reports of the elusive carnivorous marsupial, which was the top predator on the island, pop-up almost as frequently as those of Bigfoot in North America, but to date no definitive evidence has emerged of its survival. Yet, a noted cryptozoologist (one who searches for hidden animals), Dr. Karl Shuker, wrote recently that tiger hunters should perhaps turn their attention to a different island: New Guinea.

The Tasmanian tiger, also known as the thylacine, once populated much of Tasmanian and mainland Australia—where it is also still searched for—but few know that the animal was present on New Guinea as well. Its prehistoric presence there first came to light in 1960 when archeologists discovered the lower jaw of a Tasmanian tiger.

“Further confirmed fossil remains, dating at over 2 million years old, have subsequently been found on New Guinea; and also in later years, unconfirmed sightings of thylacine-like beasts have been reported from both Papua New Guinea (PNG) and Irian Jaya (the western, Indonesian half of New Guinea),” Shuker told mongabay.com.

A specimen of the Tasmanian tiger in the Natural History Museum at Oslo, Norway. Photo by: L. Shyamal.

While Tasmanian tigers are believed to have died out in New Guinea at the end of the Pleistocene, Shuker believes there’s a chance a population still survives on the mountainous island, which contains some of the world’s least-explored terrestrial habitats.

“New Guinea, especially Irian Jaya, is far less well-explored than either Tasmania or mainland Australia, as confirmed for instance by recent expeditions to Irian Jaya’s Foja Mountains, where several new and potentially new species were discovered, including a giant rat, a tiny wallaby, and a new honeyeater,” Shuker says. “Consequently, there is a much greater chance of zoological novelties turning up here than elsewhere within the thylacine’s former distribution range, and one such novelty may be the thylacine itself.”

In fact, curious stories have filtered out of New Guinea in recent years. In Irian Jaya, some tribal groups talk of a local canine-like animal known locally as the “dobsegna.” According to Shuker, descriptions of the animal—not yet confirmed or identified by scientists—track closely to the Tasmanian tiger, including a massive mouth (notably, Tasmanian tigers could open their mouths up to 120 degrees) and a long straight tail. In addition, Shuker says he does not believe the dobsegna refers to another wild canine on the island: the New Guinea singing dog.

“The singing dog is not striped (unlike the mysterious dobsegna and the thylacine), and does not have a stiffened tail (which the dobsegna does, just like the thylacine). Moreover, native tribes are very familiar with the singing dog, which they have hunted for food in the past when it was still common, whereas they seem much more wary and even frightened of the dobsegna,” explains Shuker.

However, so far these reports, however tantalizing, remain just that: hear-say. No one has yet brought back proof, such as photos, videos, samples, or the Holy Grail of cryptozoologists: a living animal.

Shuker says the next step is to “send out dedicated expeditions to Irian Jaya and Papaua New Guinea in search of [the Tasmanian tiger], or in search of preserved relics of it in native villages.” Some possible starting places: the forests around Mount Giluwe in Papua New Guinea’s Southern Highlands and those surrounding Puncak Jaya in Indonesian New Guinea.

In fact, new conservation technologies and techniques could make determining the status of the Tasmanian tiger in New Guinea easy, at least compared to a few decades ago. Remote camera traps have been employed worldwide to document rare and cryptic forest animals, including even playing a role in discovering new species. According to local people, the mysterious dobsegna are incredibly wary and stay hidden during the day, making remote camera traps an optimal tool for confirming this animal’s extinction. Another more recent breakthrough in conservation is using DNA gathered from blood-sucking invertebrates, such as leeches and flies, to determine what they have been feeding on. Scientists mix the blood-meals together and then tease out the various DNA markers. Scientists already have DNA from Tasmanian tiger pelts, making a match possible. 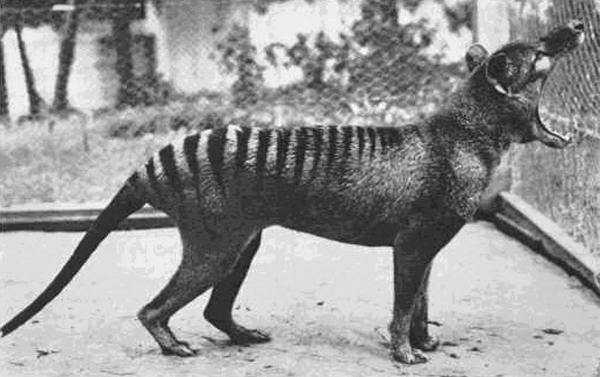 Even if a relic population of Tasmanian tigers survives in New Guinea, time may be running out for it and other species. In the last decade, New Guinea—both the Indonesian half and the Papua half—has seen a major expansion in deforestation and ecosystem degradation. Illegal logging, road-building, monoculture plantations, and mining are becoming rife across the country, in many cases leading to conflict between locals and overseas corporations.

But Shuker says “there are still very sizable areas presently untouched by deforestation,” adding that “clearly, because of such threats to their existence, this ought to provide a major incentive for seeking and confirming their existence, should they genuinely exist, as their habitat can then (one hopes!) receive official ongoing protection, thereby ensuring their survival.”

If the Tasmanian tiger still resides in the wilds of New Guinea—and it’s a big if—the find would certainly be among the most amazing zoological discoveries of the last hundred years. In addition, whatever scientists or adventurers uncovered it would be immortalized in the annals of science. Of course, that’s assuming that thousands of years after its presumed local extinction, the Tasmanian tiger—that wide-mouthed, tiger-striped, marsupial predator—still haunts the night forests of New Guinea. 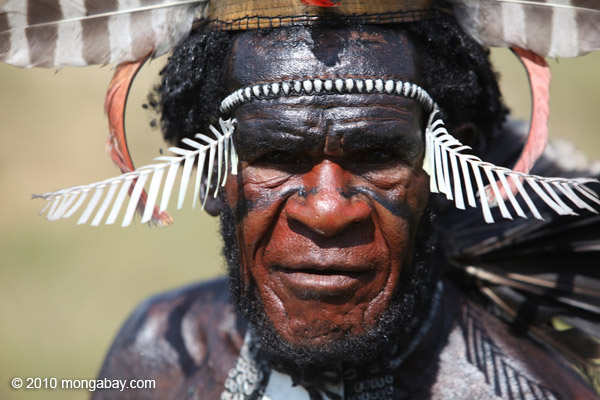 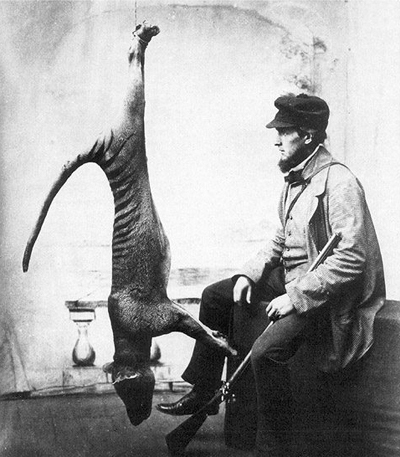 The thylacine was purposefully eradicated as a pest to livestock in Tasmanian, which most believe is the species’ last resting place. Here a hunter poses with a bagged thylacine. Photo by: Unknown. 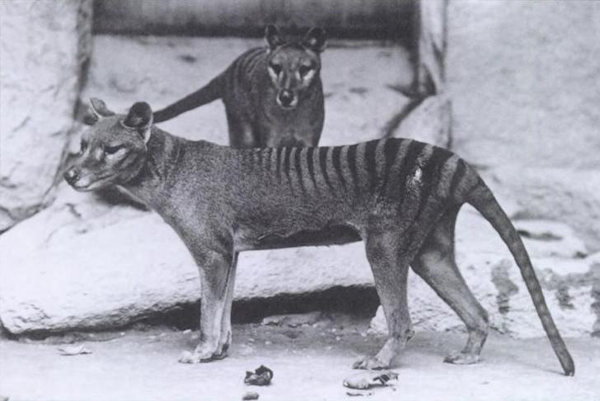 Photo of Tasmanian Tigers in the National Zoo, Washington DC in 1906. Photograph by E.J. Keller, from the Smithsonian Institution archives. 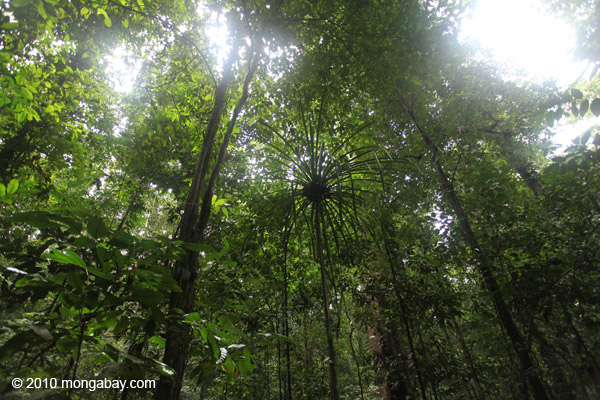 Tropical forest in New Guinea. Could thylacines still survive in the most unexplored parts of the island? Photo by: Rhett A. Butler.

(06/19/2012) Cultural practices including beliefs in mythical beasts and animals that dance have helped maintain forests in the West African country of the Gambia and Malaysian Borneo, said a researcher from Oxford University speaking at the annual meeting of the Association for Tropical Biology and Conservation in Bonito, Brazil.