Brazil’s advanced satellite monitoring system, coupled with increased law enforcement, was responsible for nearly 60 percent of the 101,000 square kilometer-drop in deforestation observed between 2007 and 2011, argues a new study published an international think tank.

The analysis, conducted by the Climate Policy Initiative (CPI), assessed the influence of policy changes on the sharp decline in deforestation in the Brazilian Amazon since 2004. It used 2007 as the cut-off because that’s when the Brazilian government introduced DETER, a satellite-based monitoring system that can detect changes in forest cover on a monthly basis. The technology enables law enforcement officials from Brazil’s environmental protection agency, IBAMA, to take quick action against illegal forest clearing.

The study projected that some 100,000 sq km (38,600 sq miles) of Amazon forest would have been cleared over the five year period had there been no monitoring or law enforcement. It then calculated the impact of both monitoring and environmental fine collection by IBAMA, a proxy for law enforcement. To determine the effect of increased law enforcement, CPI included a scenario under which the rate of fine collection was help constant at the 2003 level. 2003 was the year before Brazil launched its Action Plan for the Prevention and Control of Deforestation in the Legal Amazon (PPCDAm).

CPI concluded that 59,511 sq km of the 101,073 drop in deforestation that would have otherwise occurred could be attributed to satellite-based monitoring and increased law enforcement. It estimated that had there been no law enforcement at all, some 164,290 sq km of forest might have been cleared. 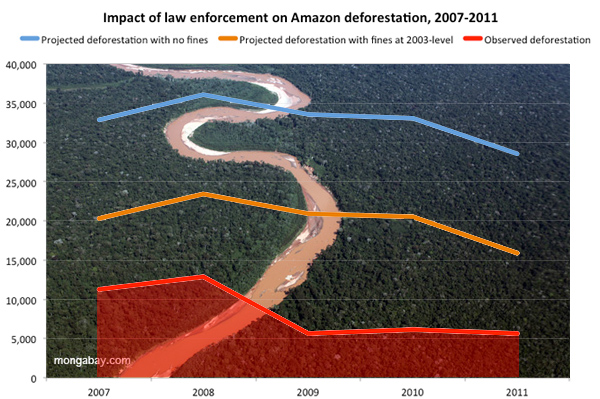 “Brazil’s monitoring and law enforcement efforts are clearly playing a big part in preventing deforestation,” said Assunção, director of CPI’s Brazil operations and professor at the Department of Economics at the Pontifical Catholic University of Rio de Janeiro (PUC-Rio), in a statement. “Based on our analysis, we recommend maintaining these important policies and further improving monitoring technology to increase the effectiveness of law enforcement activities.”

The analysis also attempted to put a value of the programs.

“Ibama’s 2011 budget was USD 560 million, while INPE’s 2010 budget was USD 125 million. According to our simulation, command and control efforts preserved an average of 24,500 sq km of forest area per year in the 2007 through 2011 period. This area is equivalent to approximately 900 million tCO2,” wrote the authors. “Therefore, any price of carbon set above $0.76 per ton of CO2 would more than compensate the cost of environmental monitoring and law enforcement in the Amazon. Compared to the price of 5.00 USD/tCO2 commonly used in current applications, these figures suggest that the presence of an active monitoring and law enforcement authority in the Amazon has the potential to yield significant net monetary gains.”

Contrary to claims from Brazil’s agricultural lobby, the study found that the policy measures “had no effect on agricultural production.” Thus Brazil was able to reduce deforestation while simultaneously increasing food production and agricultural exports.

“This finding reinforces the case for relying on monitoring and law enforcement to protect the Amazon. Moreover, it indicates that, in the Amazon region, both preservation and economic growth can happen simultaneously, contrary to any perceived dichotomy between these two goals,” the paper concludes.

(03/28/2013) Areas in the Amazon where there is conflict over land tenure have higher deforestation rates than places where land rights are secure, finds a new study that assesses the effectiveness of indicators used to gauge the success of protected areas in Brazil.

(03/05/2013) The history of the Brazilian Amazon has long been marked by deforestation and degradation. Until recently the situation has been considered out of control. Then, in 2004, the Brazilian government launched an ambitious program to combat deforestation. Public pressure—both national and international—was one of the reasons that motivated the government to act. Another reason was that in 2004, deforestation contributed to more than 55 percent of Brazil’s total greenhouse gas emissions, making Brazil the fourth-largest greenhouse gas emitter in the world.

(11/27/2012) Deforestation in the Brazilian Amazon fell to the lowest rate since annual record-keeping began in 1988 according to provisional data released Tuesday by Brazil’s National Space Research Agency (INPE). 1,798 square miles (4,656 square kilometers) of Amazon forest was chopped down during the 12 months ending July 31, 2012, 27 percent less than the year earlier period.

(06/20/2012) A system providing monthly alerts on deforestation and forest degradation in the Brazilian Amazon will soon be generated on the Google Earth platform Engine, reducing the time it takes to process and disseminate data, reports Imazon, the Brazilian NGO that developed the Alert System of Deforestation (SAD).

(06/06/2012) Deforestation of Brazil’s Mata Atlântica — a forest ecosystem more threatened than the Amazon rainforest — fell to 133 square kilometers between 2010 and 2011, down about 14.7 percent from the annual average between 2008 and 2010, reports Brazil’s National Institute for Space Research (INPE) and Fundação SOS Mata Atlântica.

(09/29/2010) In recent years there has been an explosion in the number of satellite-based monitoring applications and technologies, which is perhaps best exemplified in the eyes of the public by Google Earth, which allows anyone with a decent internet connection to view overhead images of nearly any place on Earth. But these new applications are also helping scientists more effectively monitor environmental change, including the fluctuations in polar sea ice, shifts in oceanic plankton, and deforestation. An important factor in the expanded use of satellite imagery has been the U.S. government’s free Landsat Data Distribution Policy, which allows free or inexpensive access to data captured by Landsat satellites, which have been collected data on a regular basis since 1972. But the Landsat program is not presently operating at its full capacity, increasing the risk of a ‘data gap’ before a new system is in place in 2012.