Climate change is in part to blame for rising conflict and crime in Nigeria, according to the president’s National Security Advisor, Colonel Sambo Dasuki. Speaking to the House Committee on Climate Change, Dasuki said that the rise of Boko Haram insurgents, a jihadist group in northern Nigeria, and worsening crime was linked to climate change reports All Africa.

According to Dasuki, worsening desertification, rising sea levels in the Niger Delta, and the shrinking of Lake Chad have pushed young men out of traditional occupations and into lawlessness. For example, traditional fishermen on Lake Chad have had to leave their occupations as the lake has dried up, a phenomenon experts have linked to a combination of climate change and poor management.

“In the state of joblessness the youth can easily be forced into crime,” A. Nyam, the Director of Internal Security, told the meeting.

The Boko Haram formed in 2001 and since then has been responsible for thousands of deaths; the Islamic group wants to establish sharia law in Nigeria.

Nigeria has also been plagued by conflicts erupting between herders and farmers for access to shrinking water resources and pasture lands eaten away by desertification.

The most populous nation on the continent, Nigeria is divided between Muslims in the north and Christian in the south. Despite instability, the country has the largest economy on the continent after South Africa largely due to oil reserves which account for nearly half of its GDP. Still despite a large GDP and rapid economic growth, the majority of Nigerians (63 percent) live on less than $1 a day. Oil production in the country has also left large-scale environmental scars and local conflict.

Scientists and policy experts have long warned that climate change could increase conflict, and even wars, worldwide. Some experts have pointed to climate change as playing a role in the revolutions across the Middle East (which were partly linked to rising food prices) as well as the ongoing conflict in Darfur. In fact, a study in 2011 found that civil conflicts in tropical countries were twice as likely to occur in hot and dry years, conditions that are likely to increase as the climate continues to warm. 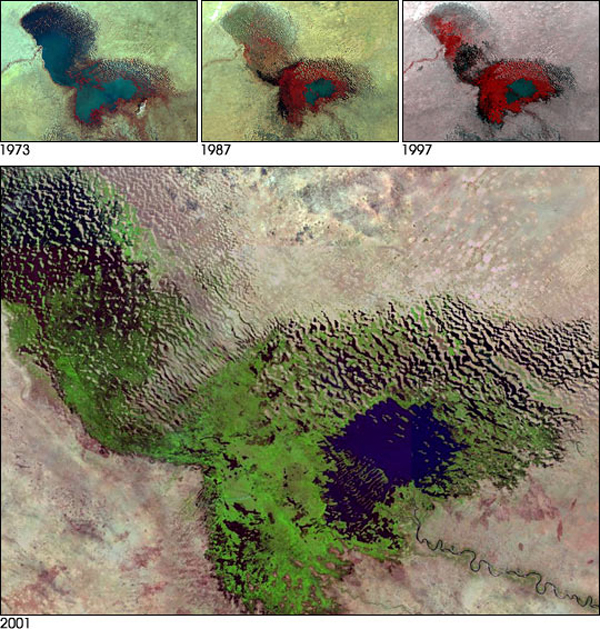 From 1963 to 1998 Lake Chad shrunk by an astounding 95 percent. It has since recovered slightly, but is no-where near its historical size. Photo by: NASA.