A Toronto Stock Exchange-listed mining company has hired an official being investigated for corruption under its effort to convince the Aceh provincial government to re-zone protected forest areas for a gold mine on Indonesia’s Sumatra island, according to an alliance of Indonesian environmentalists.

The official, former Golkar Deputy Chairman Fadel Muhammad, has been retained by East Asia Minerals (TSX-V: EAS) to help it win a carve-out for its Miwah project, a 30,000-hectare concession atop a forested mountain in Aceh. Fadel’s role is to “provide invaluable assistance to enable the projects in Indonesia to move forward in a timely and sustainable manner,” according to East Asia Minerals CEO Edward Rochette.

Fadel’s hiring to facilitate the concession process has raised eyebrows because he is at the center of an anti-corruption probe.

“Fadel, former Minister of Maritime Affairs and Fisheries and former Governor of Gorontalo Province, in addition to being the former Deputy Chairman of Indonesia’s Golkar Party, was re-named as a corruption suspect by the Attorney General’s office last week after several previous investigations over recent years,” said a statement issued by an alliance of local environmental groups fighting a plan to re-zone up to 1.2 million hectares of protected forest for industrial activities. “He is accused of misusing Rp 5.4 billion (US$ 567,000) from the 2001 provincial budget during his tenure as Gorontalo’s governor.”

Dedi Ratih, a campaigner for alliance member WALHI-Indonesia (Friends of The Earth Indonesia), said Fadel’s work for East Asia Minerals illustrates the influence corporations have on policymaking in Indonesia.

“This spatial plan is being developed via a highly ‘unhealthy’ process, in which foreign corporations are intervening and driving local policy,” Dedi said in a statement. “Reclassification of these forests is clearly not in the best interests of Aceh’s local communities, but instead in the interests of massive natural resources exploitation. This plan should be rejected immediately.” 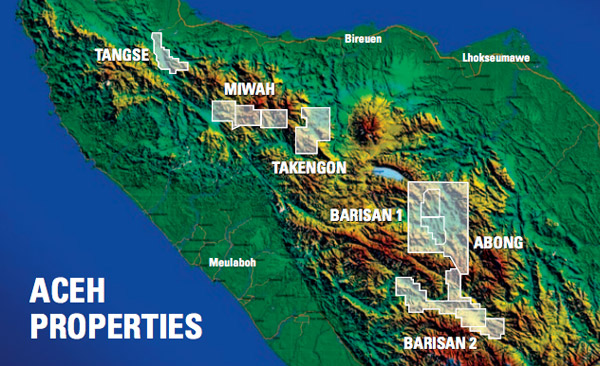 Graham Usher, a landscape protection specialist who worked on a review of Aceh’s forestry sector for the previous governor and is part of the activist alliance, agreed.

“The East Asia Minerals press release… essentially suggests that they and other extractive companies are effectively driving public policy, namely spatial planning, in Aceh. Not only is this a shocking admission of flawed governance, but the company even seems proud of it! Spatial planning should be based on sound scientific analysis of land suitability and environmental risks: not the profit margins of foreign companies!”

Under the spatial plan proposed earlier this year by Aceh’s new governor, large blocks of previously protected forest would be licensed for logging, oil palm plantations, and open-pit mining. East Asia Minerals says it expects the reclassification process to “allow it to fully exploit the area’s mining potential and expand exploratory drilling – pushing into areas that are currently protected.” 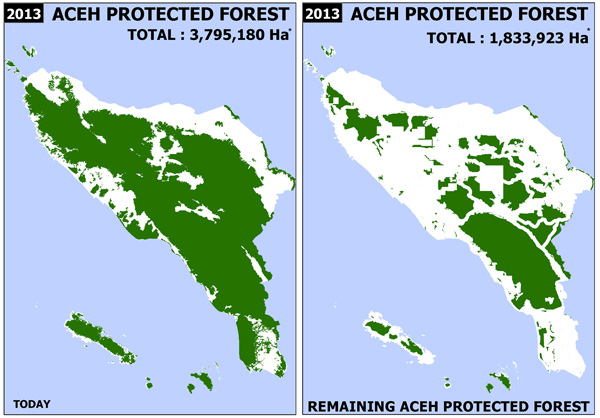 However, another environmental group expressed skepticism over the mining company’s progress in getting the area re-zoned. Elfian Effendi of Greenomics-Indonesia told mongabay.com that the Miwah block was not included in the final spatial plan submitted to the Ministry of Forestry, which has final sign-off on rezoning of lands currently recognized as part of Indonesia’s forest estate. 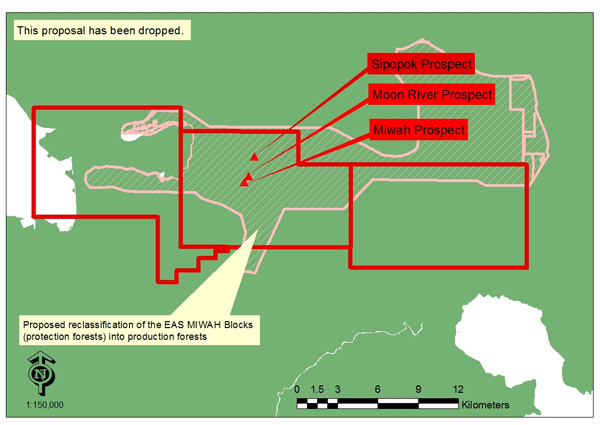 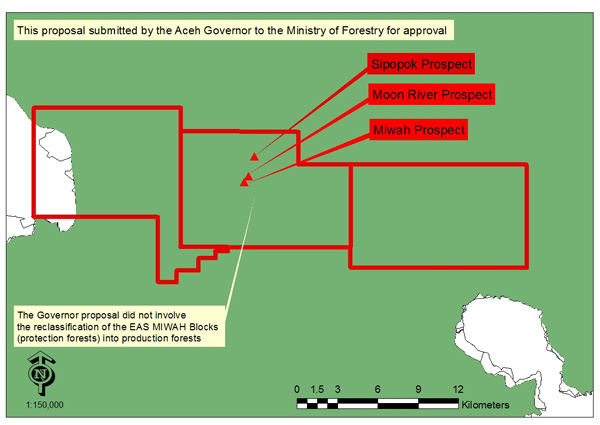 An analysis of the spatial plans put forth by the Aceh government. Prepared by Greenomics.

Either way, the alliance of local NGOs has stepped up its campaign to block the new spatial plan, calling it dangerous to Aceh’s wildlife and people. The alliance has focused on the risk of disasters — Aceh suffered the brunt of the devastating December 2004 Indian Ocean tsunami — and the province’s renowned biodiversity, including populations of critically endangered orangutans, rhinos, elephants and tigers.

“This is a dangerous move,” said Usher. “Aceh’s people have experienced countless devastating landslides already in the past that were caused by exactly this kind of forest clearing and disregard for planning laws. This will result in yet more lives lost in coming years and immeasurable losses to local economies.”

Ian Singleton, director of the Sumatran Orangutan Conservation Program, added that should re-zoning proceed as currently proposed, it would have a devastating impact on some of the world’s most threatened species.

“This world renowned protected area – the Leuser Ecosystem – is the only place on earth where orangutans, rhinos, tigers and elephants are found side-by-side and the least real hope for the survival of viable populations of each of them. Not to mention the myriad of other threatened species residing there,” Singleton said in a statement. “If these plans proceed, their future is in immediate jeopardy.”

East Asia Minerals says it has a corporate social responsibility policy to deal with environmental concerns.

(04/16/2013) A Toronto-listed mining company says it is working closely with the Indonesian government to strip the protected status of some 1.6 million hectares of forest on the island of Sumatra. In a statement issued Tuesday, East Asia Minerals Corporation (TSX:EAS) claimed it is actively involved in the process of devising a new spatial plan for Aceh province, Sumatra’s western-most province. The proposed changes to the spatial plan, which governs land use in the province, would re-zone large areas of protected forest in Aceh for industrial activities.