After facilitating large-scale logging and conversion of extensive areas of rainforest habitat, the government of Sarawak says it will protect a population of up to 200 of the world’s rarest Bornean orangutans recently identified during field surveys by conservationists, reports the Wildlife Conservation Society (WCS).

The population lives in an area of about 14,000 hectares near Sarawak’s Batang Ai National Park, a protected area that together with Lanjak-Entimau Wildlife Sanctuary accounts for about 2,000 of the 3,000-4,500 Pongo pygmaeus pygmaeus orangutans estimated to survive in the wild. Pongo pygmaeus pygmaeus is considered the rarest sub-species of Bornean orangutan.

The population, which was well-known to local Iban communities, was identified during field surveys conducted in February by the Sarawak Forest Department, Sarawak Forestry Corporation, the Wildlife Conservation Society and Borneo Adventure. The four organizations plan to conduct a follow-up study on potential action plans for the area. According to WCS, “The Sarawak government intends to hold a dialogue with local communities and the other key stakeholders to discuss options and to involve them in any conservation effort in the area.” 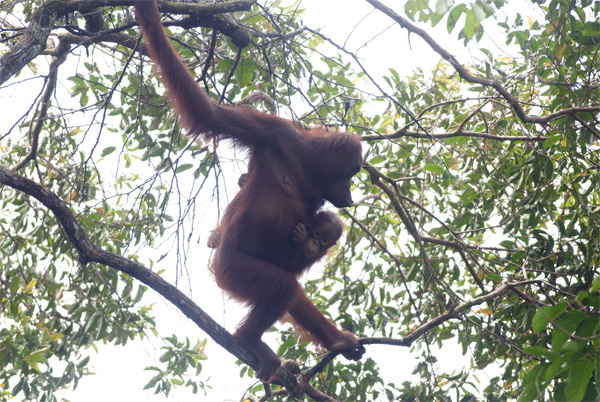 The announcement was a rare bit of good news for conservationists working in Sarawak, which has protected less than 5 percent of its land mass while logging more than 90 percent of its forests and converting large areas to oil palm plantations. Activists have linked Sarawak’s long-ruling chief minister and his family to dozens of companies involved in the destruction of the state’s forests.

(03/20/2013) Tax evasion, kick-backs, bribery, and corruption all make appearances in a shocking new undercover video by Global Witness that shows how top individuals in the Sarawak government may be robbing the state of revenue for their own personal gain. Anti-corruption groups have believed that corruption has been rife in the Malaysian state of Sarawak for decades, but Global Witness says their investigation offers undeniable proof.