Demand for metals is likely to increase tenfold as developing economies surge ahead, putting severe stress on the natural environment, a new report from the United Nations Environment Program (Unep) has warned.

The organization has suggested a novel response: bring in the mining companies—often seen as the environmental villains—to sort out the recycling.

At present, demand is fulfilled by mining more metals, some of them—such as rare earths—that are in limited supply. Mining in many parts of the world is often carried on regardless of the social and environmental consequences, including child labour, ground, water and air pollution, and the destruction of forests. Much less attention is paid to reusing metals once they have been expensively mined, even though this can often be cheaper, especially in the case of commodity metals such as aluminum and copper. 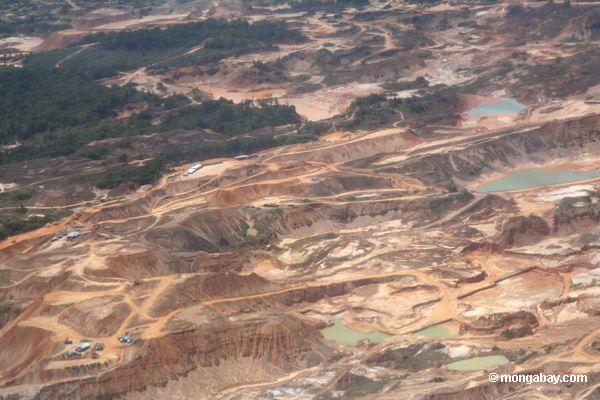 Aerial view of Rio Huaypetue gold mine in Peru. Photo by: Rhett A. Butler.

But current recycling programs have not kept up with the reality of modern technology. Mobile phones contain more than 40 elements including copper and tin, but also precious metals such as gold, silver and palladium, and specialty metals such as cobalt and indium. Lightbulbs also contain rare earths, and a modern car can contain nearly all the metals available. While recycling has focused on simple waste streams, the problem of separating out these elements for recycling has been neglected.

That is where, according to Unep, the miners should come in. Extraction companies have the expertise to separate the metals from their ore, so they should also be able to help in separating out valuable recyclable materials from complex products at the end of their useful lives.

The report found: “Recyclers increasingly seek the help and expertise of metal miners, who extract mineral ores often containing several metals and have developed ways and means of recovering the metals of interest via complex methods that are based on physical and chemical principles.”

Unep wants that approach to be replicated around the world, in a “product-centric” approach to recycling that would see governments and environmental authorities bring in approaches that would “target the specific components of a product, devising ways to separate and recover them”. This can be done with dedicated recycling programs, and by setting to work on “urban mines”—landfills and dumps where valuable metals are re-buried under tonnes of rubbish.

Achim Steiner, executive director of Unep, said: “A far more sophisticated approach is urgently needed to address the challenges of recycling complex products, which contain a broad variety of interlinked metals and materials. Product designers need to ensure that materials such as rare earth metals in products ranging from solar panels and wind turbine magnets to mobile phones can still be recovered easily when they reach the end of their life.”

(04/25/2013) Mobile device giant Samsung has admitted to using tin sourced from a controversial mining operation on the Indonesian island of Bangka, where unregulated mining kills 150 miners a year and causes substantial environmental damage, reports The Guardian and Mongabay-Indonesia.

(03/29/2013) Amazonian forest cleared in Ecuador, a mountain leveled in Peru, the Cerrado savannah converted to soy fields in Brazil and oil fields under development in Venezuela’s Orinoco belt.

(02/13/2013) Brazil’s Federal Public Ministry rejected a proposed gold mining project adjacent to a controversial dam site in the heart of the Amazon rainforest, reports Amazon Watch, an environmental activist group that is campaigning against both the mine and the dam.

In search of conflict-free tin from the Congo

(02/12/2013) I am excited to be returning to the Democratic Republic of Congo (DRC) this weekend. My previous visit in January and February of last year was with a delegation aiming to analyze and audit the first conflict-free supply of tantalum from the DRC via the Solutions for Hope ‘closed pipe’ project. The success of Solutions for Hope, which Motorola Solutions helped to found with AVX, proved that it is possible to source minerals from the DRC through a secure, traceable chain of custody from mine to smelter. This trip extends from that work with the Conflict-Free Tin Initiative (CFTI).