GAPKI General Secretary Joko Supriyono and Executive Director Fadhil Hasan said the Indonesian palm oil industry would support a mechanism under which palm oil companies could swap high carbon stock (HCS) and high conservation value (HCV) forest in so-called “APL” areas — lands zoned for conversion — for the equivalent area of non-forest lands that are part of the national “forest estate” if such exchanges were permitted by law. As much of 40 million hectares of Indonesia’s “forest estate” — land controlled by the powerful Ministry of Forestry — consists of land that is either stripped of forest or heavily degraded.

“GAPKI does not support the forestry moratorium because it makes APL land off-limits to oil palm expansion,” Joko told mongabay.com, referring to the current two-year ban on new plantation and logging concessions in some 14 million hectares of previously unprotected forest and peatland. “But GAPKI would agree to land swaps [where APL land with high carbon stock] is exchanged with degraded forest in the forest estate.” Under the current forestry law, degraded and non-forest land in the forest estate can’t be used for non-forestry uses unless the Ministry of Forestry relinquishes control of it. The GAPKI officials added that to meet government production targets of 40 million tons of crude palm oil by 2020, the Indonesian palm oil industry would need to both increase productivity of existing plantations Ô especially low-yielding smallholder lots — and expand the extent of plantations beyond the current 9 million hectares (34,700 square miles) in the country. Gapki’s 570 members control million hectares of that area.

Land swaps has been previously proposed by palm oil companies in Indonesia, but progress had been slow due to the complexities of competing and overlapping bureaucracies, unclear land title, and confusing regulations. The World Resources Institute (WRI), a U.S.-headquartered NGO, has tried to move the effort forward by mapping non-forest areas for potential expansion. It estimates that there may be some 50 million ha suitable for plantations without the need to clear carbon-dense forests.

Palm oil companies and other developers often target forested lands because it can be easier to get a license than for degraded lands, which may have multiple competing claims, often from local communities. In some cases, timber felled during the clearing process can generate startup income to help offset the costs of establishing a plantation. But forest clearing leaves a company open to criticism from environmental groups, who note that forest and peat conversion is a huge source of greenhouse gas emissions and can threaten endangered wildlife like orangutans, elephants, and tigers, depending on the location.

Joko and Fadhil said they felt much of the criticism levied at the palm oil industry was unfair and failed to consider the context.

“Oils and fats demand is growing by 5-6 million tons per year globally and palm oil has the highest yield. Other crops take up more land to produce the same amount of oil,” said Joko, pointing to maize (corn) and rapeseed (canola).

In their view, conversion of forests outside the officially recognized forest estate shouldn’t count as deforestation because clearing is sanctioned by the government. In other words, it is legal, planned deforestation. Still, Joko and Fadhil admitted that there are some bad actors in the industry.

“The majority of palm oil plantations have already adopted palm oil sustainability schemes,” Fadhil asserted. “In some cases there is a violation but to generalize that all palm oil companies are bad and destroying [the environment] is baseless and wrong.”

When asked whether they thought Indonesian palm oil producers could suffer should Brazil successfully meet its ambitious expansion targets, Joko and Fadhil said they didn’t see the South American giant as a threat, citing the annual 5-6 million ton growth in vegetable oil demand. Brazil is aiming to convert up to 5 million hectares of degraded cattle pasture to oil palm plantations by 2020, which if achieved, would represent about 30 percent of current acreage worldwide.

Joko and Fadhil also downplayed the potential impact of the emergence of synthetic oils, like those derived from algae.

“Other oils have been popular at points in the past,” said Fadhil. “Palm oil’s advantage is it is highly productive, profitable [and] the supply chain is integrated from small farmers to big companies.” 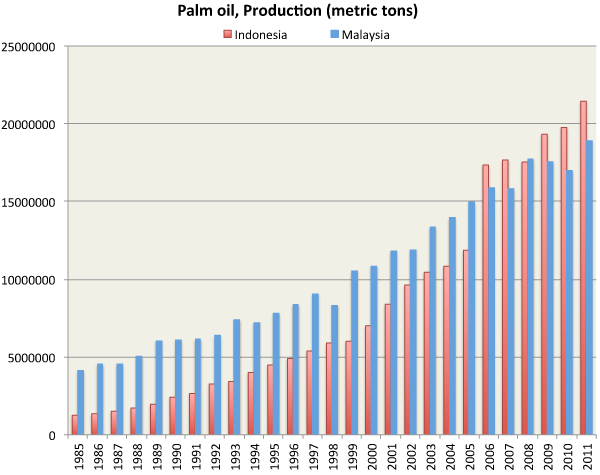 Malaysia and Indonesia are the largest palm oil producers in the world, accounting for 83 percent of global market share combined in 2011 according to the FAO.

(03/14/2012) Surging demand for vegetable oil has emerged as an important driver of tropical deforestation over the past two decades and is threatening biodiversity, carbon stocks, and other ecosystem functions in some of the world’s most critical forest areas, warns a report published last week by the Union of Concerned Scientists (UCS). But the report sees some reason for optimism, including emerging leadership from some producers, rising demand for “greener” products from buyers, new government policies to monitor deforestation and shift cropland expansion to non-forest area, and partnerships between civil society and key private sector players to improve the sustainability of vegetable oil production.