Illegal logging in the heart of Indonesia’s Gunung Palung National Park may be putting one of the country’s last remaining lowland forests at risk. The park, located in Indonesia’s West Kalimantan province on the island of Borneo, is home to a number of endangered species including hornbills and gibbons, as well as around 2,500 orangutans, and is the site of a research station that has been collecting data on the forest for more than 20 years.

The logging is taking place in Tanjung Gunung hamlet, in the core zone of the park and near the research station, said Kinari Webb, the founder of Alam Sehat Lestari (ASRI), a conservation and public health organization that works with communities in the area.

While illegal logging has long been a problem in the park, which lost around 38 percent of its lowland forests between 1988 and 2002, the logging in Tanjung Gunung is particularly alarming, Webb said. Not only does it threaten a rare intact lowland forest, but it also jeopardizes future research in the area. “There is a lot of data from the area that can be compared from the past [20 years of research] to today,” she told Mongabay-Indonesia in Jakarta last month. 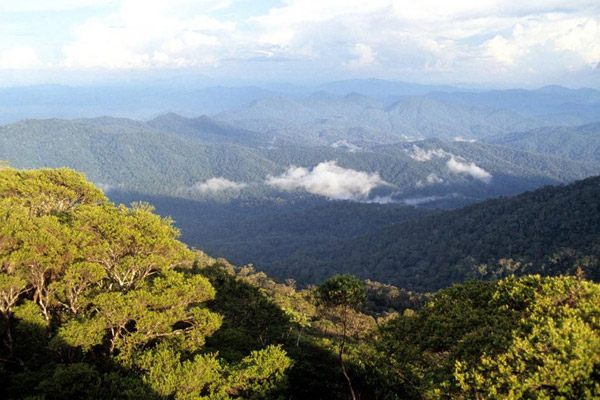 View of the core area of Gunung Palung. Photo by Cam Webb.

The situation in Tanjung Gunung is emblematic of a common obstacle to forest protection in Indonesia, where migrants from outside an area can often be found clearing forests even in places where the local community supports conservation efforts.

Gunung Palung National Park is the site of a 5-year ASRI program designed to reduce illegal logging and increase support for forest conservation by providing inexpensive high-quality healthcare to local communities. ASRI found that paying for healthcare was one of the main drivers of deforestation in the area, so it established a program that provides highly-subsidized healthcare to communities in exchange for agreements not to log. The program also offers alternative payment forms for communities who are not compliant with anti-logging agreements, where patients can work on conservation-promoting projects in exchange for treatment.

Illegal logging in Gunung Palung. Photo by Rhett A. Butler

According to a recently released five-year impact assessment, the program has seen increased awareness of conservation and decreased logging in the area, as well as improvements in health indicators in communities. A survey of nearly 1,500 households in and around the national park showed widespread support for forest conservation among project participants and a sharp decline in the number of active loggers. However despite the overall success of the program, illegal logging remains a problem in Tanjung Gunung, where local residents have been unable to stop the logging activities of migrants from outside the area.

Hendrikus Adam, head of the research and campaign division for the environmental group Walhi in West Kalimantan, said the relevant authorities should immediately visit the site in Gunung Palung where the illegal logging is allegedly taking place. “If it is indeed happening, it is important to uncover who the perpetrators are and what is their motive,” he said. “The authorities must act quickly so that the destruction can be addressed immediately.”