What do you do when you’re smuggling 22,000 pounds of an endangered species on your boat? Answer: crash into a protected coral reef in the Philippines. Last Monday a Chinese vessel slammed into a coral reef in the Tubbataha National Marine Park; on Saturday the Filipino coastguard discovered 400 boxes of pangolin meat while inspecting the ship. Pangolins, which are scaly insect-eating mammals, have been decimated by the illegal wildlife trade as their scales are prized in Chinese Traditional Medicine, their meat is commonly eaten, and a soup made with pangolin fetus is considered a delicacy.

“It is bad enough that the Chinese have illegally entered our seas, navigated without boat papers and crashed recklessly into a national marine park and World Heritage Site,” Jose Ma. Lorenzo Tan, head of WWF-Philippines, told the Associated Press. “It is simply deplorable that they appear to be posing as fishermen to trade in illegal wildlife.”

Filipino authorities have detained the twelve “fishermen” running the boat. They could face a dozen years in prison and fines up to $300,000 for the poaching, however wildlife criminals are rarely sentenced to the full extent of the law.

Although little known compared to elephants, rhinos, and big cats, pangolins are thought to be the most illegally traded animal on Earth. Of the four species found in Asia, two are listed as Endangered and two are listed as Near Threatened. Experts fear that the trade may now be widening to pangolin species in Africa as well. There is no scientific evidence that pangolin scales have any medicinal properties, but that hasn’t stopped these shy, nocturnal, and harmless animals from vanishing from Asian forests. 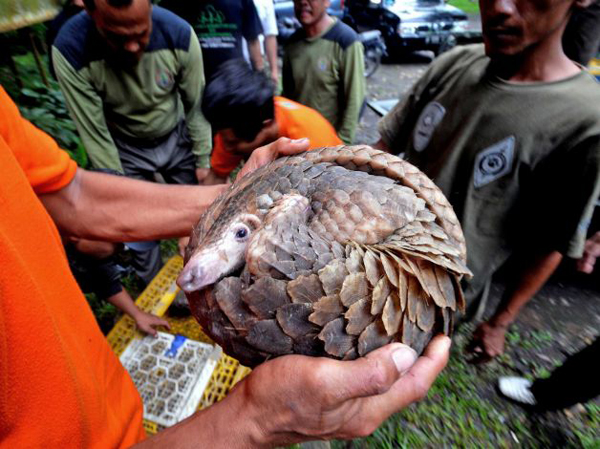 A live pangolin confiscated in Sumatra from a smuggler. Unfortunately the pangolins found aboard the ship were already dead. Photo by: Jefri Tarigan.

(09/25/2012) Scaly, insect-devouring, nocturnal, and notoriously shy, pangolins are strange mammals who remain unknown to many. But they are facing a major crisis as they are stolen from the wild in East Asia to serve as meat or traditional medicine. In Asia, two of the four species are now listed as Endangered due largely to poaching. Now, a new expert group through the International Union for the Conservation of Nature (IUCN) aims to work toward better research and conservation of the world’s imperiled pangolins, starting with launching a new website, PangolinSG.