While the month of March saw colder-than-average temperatures across a wide-swath of the northern hemisphere—including the U.S., southern Canada, Europe, and northern Asia—globally, it was the tenth warmest March on record in the last 134 years, putting it in the top 7 percent.

Temperatures last month were 0.58 degrees Celsius (1.04 degrees Fahrenheit) above the 20th Century average worldwide, according to new data from the National Oceanic and Atmospheric Administration (NOAA). The month was especially warm for Greenland, Africa, central Asia, and Australia, while the U.K. had its second coldest March on record.

So far, 2013 is as the eighth warmest year on record when one compares the period of January-March to other years. However, that could change considerably depending on the next nine months.

The earth’s average temperature has jumped by approximately 0.8 degrees Celsius (1.4 degrees Fahrenheit) over the last century due to burning fossil fuels, deforestation, and other land-use changes that emit greenhouse gases. Global warming has already led to rising sea levels, melting Arctic sea ice, worse droughts and floods, and an acidifying ocean. Recent research has also suggested that climate change may be impacting the jet stream. 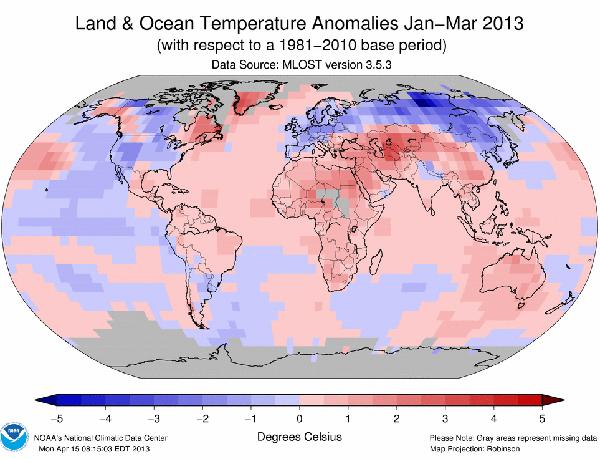