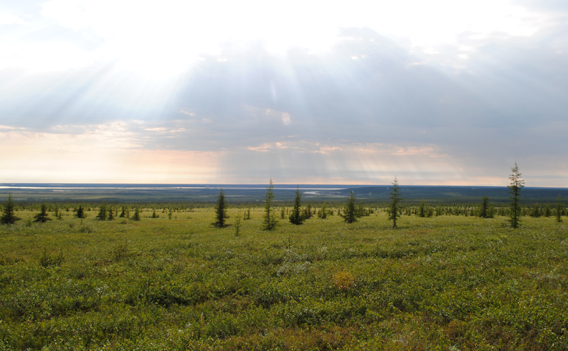 Warming about twice as fast as the rest of the world, the Arctic is already undergoing massive upheavals from climate change: summer sea ice is thinning and vanishing, land based ice sheets are melting, and sea levels are rising. Now a new study in Nature Climate Change predicts that vegetation cover in the Arctic could expand by over 50 percent by 2050. Although increased vegetation would sequester additional carbon, this would be more-than-offset by the loss of the albedo effect, whereby sunlight bounces off white (snow and ice covered) parts of the Earth.

“Such widespread redistribution of Arctic vegetation would have impacts that reverberate through the global ecosystem,” notes lead author Richard Pearson, with the American Museum of Natural History’s Center for Biodiversity and Conservation.

Pearson and his team used computer modeling to predict how vegetation would expand and shift, based on temperature and precipitation, as the Arctic continues to heat up. Their findings predict that woody cover, i.e. trees and shrubs, would expand by 52 percent in less than 40 years. While it may sound, at first, like a positive development to see forests pop up in the Arctic, it will have major ramifications according to the scientists. A number of species depend on open tundra for survival, including several ground-nesting birds. In addition, the new forests would actually amplify global warming.

“Vegetation distribution shifts will result in an overall positive feedback to climate that is likely to cause greater warming than has previously been predicted,” the researchers write in the paper.

When solar radiation falls on this region much of it is bounced back into the atmosphere due to expansive snow cover; this is known as the albedo effect, which literally means “whiteness.” However, a rise in tall shrubs and trees—turning parts of the region from white to green and brown—will mean that previously deflected solar radiation will now begin to warm the Earth.

Global temperatures have risen about 0.8 degrees Celsius (1.4 degrees Fahrenheit) since the Industrial Revolution due largely to the burning of fossil fuels. 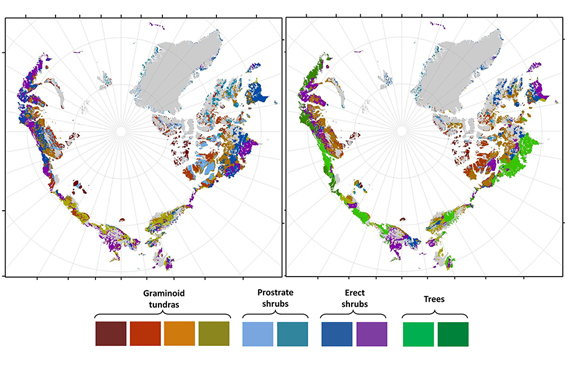 Arctic “greening”: Observed distribution (left) and predicted distribution of vegetation under a climate warming scenario for the 2050s (right). Data used to generate the observed image are from the Circumpolar Arctic Vegetation Map (2003). Click to enlarge.

(06/11/2012) Given everything marine researchers know about phytoplankton, a type of algae, no one expected to find some of the world’s largest blooms beneath Arctic sea ice. But this is exactly what scientists stumbled on during an ICESCAPE expedition in the Chukchi Sea, which is examining the massive impacts of climate change in the region. Researchers recorded a 100 kilometer (62 miles) long bloom underneath the Arctic ice pack that was four times richer than adjacent ice-free waters.