30% of Brazil’s emissions from deforestation are export-driven

2.7 billion tons of carbon dioxide emissions or 30 percent of the carbon associated with deforestation in the Brazilian Amazon between 2000 and 2010 was effectively exported in the form of beef products and soy, finds a new study published in the journal Environmental Research Letters. The research underscores the rising role that global trade plays in driving tropical deforestation.

The study, led by Jonas Karstensen of the Center for International Climate and Environmental Research in Oslo, Norway, looked at carbon emissions from beef and soy production in the Brazilian Amazon. It then calculated the share of these commodities that was exported to overseas markets.

“With a consumption perspective, the share of responsibility for deforestation is divided among the global consumers. What, in one perspective is Brazil’s problem, is now a global problem” said Karstensen in a statement. “Particularly in the last decade, greater imports by emerging markets and industrialized countries have led to an increasing share of exported emissions from Brazil.” 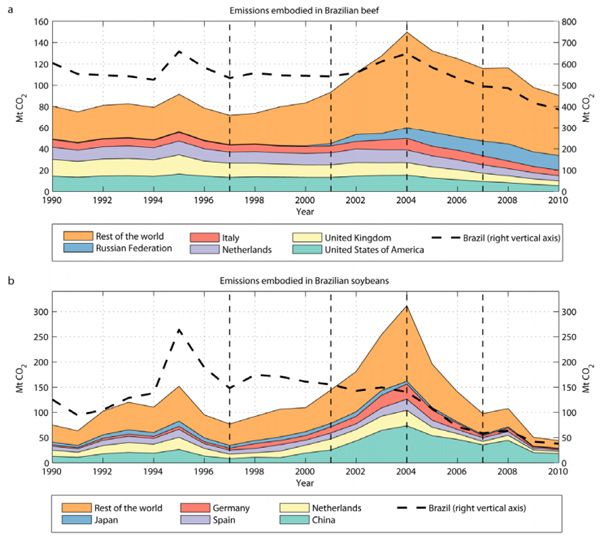 According to the paper, 29 percent of emissions from deforestation in the Brazilian Amazon were due to soybean production and 71 percent were due to cattle ranching over the past decade. But emissions from soybeans fell substantially during the second half of the 2000s, possibly a partial consequence of a soy producer moratorium on rainforest conversion that was signed in 2006 after a damaging Greenpeace campaign. Overall emissions from deforestation in the Brazilian Amazon are declining in step with the falling rate of forest clearance, although rates outside the Brazilian Amazon — especially in Bolivia and Peru — appear to be on the rise, possibly as a consequence of agricultural development shifting across borders.

The paper adds to a growing body of research that shows a major shift in global drivers of deforestation from subsistence agriculture to industrial commodity production. The trend indicates that efforts to curb deforestation — like the nascent Reducing Emissions from Deforestation and forest Degradation (REDD)+ program — will have to address urban consumption to be effective. Focusing solely on small-holder agriculture will fail to reduce emissions from deforestation.

(03/07/2013) Gucci has rolled out a collection of ‘zero-deforestation’ leather handbags. Each handbag comes with a ‘passport’ that provides the history of the product’s supply chain going back to the ranch that produced the leather. The line emerged out of concerns that leather in the fashion industry is contributing to deforestation in the Brazilian Amazon, where roughly two-thirds of forest destruction is for cattle production.

Forests, farming, and sprawl: the struggle over land in an Amazonian metropolis

(12/04/2012) The city of Parauapebas, Brazil is booming: built over the remains of the Amazon rainforest, the metropolis has grown 75-fold in less than 25 years, from 2,000 people upwards of 150,000. But little time for urban planning and both a spatial and mental distance from the federal government has created a frontier town where small-scale farmers struggle to survive against racing sprawl, legal and illegal mining, and a lack of investment in environmental protection. Forests, biodiversity, and subsistence farmers have all suffered under the battle for land. In this, Parauapebas may represent a microcosm both of Brazil’s ongoing problems (social inequality, environmental degradation, and deforestation) and opportunity (poverty alleviation, reforestation, and environmental enforcement).

Profit, not poverty, increasingly the cause of deforestation

(06/09/2011) Despite environmentalists’ efforts to combat “rainforest beef” in the 1980s, pasture expansion for cattle is still the primary cause of deforestation in the Brazilian Amazon, says a new report produced by Brighter Green. While Brazil’s investments in agribusiness have made it an agricultural powerhouse—the country is now the world’s third-largest exporter of farm commodities after the US and the European Union—unfortunately, two of the Brazil’s key products, cattle and soy, are still driving deforestation as well as economic growth. According to Brighter Green’s report, researchers estimate that cattle ranching caused 65-70 percent of land clearing in the Amazon between 2000 and 2005.

(02/16/2009) Nearly 80 percent of deforestation in the Brazilian Amazon results from cattle ranching, according to a new report by Greenpeace. The finding confirms what Amazon researchers have long known – that Brazil’s rise to become the world’s largest exporter of beef has come at the expense of Earth’s biggest rainforest. More than 38,600 square miles has been cleared for pasture since 1996, bringing the total area occupied by cattle ranches in the Brazilian Amazon to 214,000 square miles, an area larger than France. The legal Amazon, an region consisting of rainforests and a biologically-rich grassland known as cerrado, is now home to more than 80 million head of cattle. For comparison, the entire U.S. herd was 96 million in 2008.