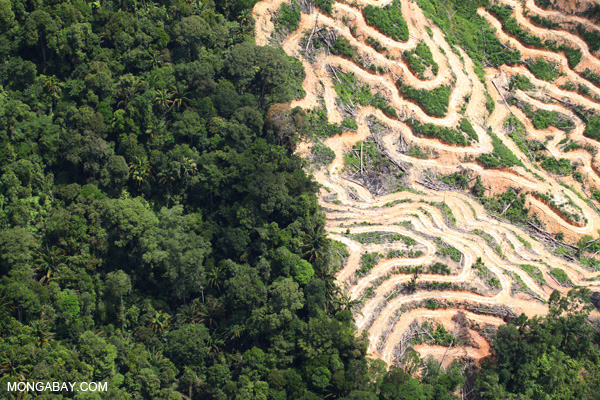 Deforestation in Borneo. Photo by: Rhett A. Butler.

There’s little evidence that the Earth is nearing a global ecological tipping point, according to a new Trends in Ecology and Evolution paper that is bound to be controversial. The authors argue that despite numerous warnings that the Earth is headed toward an ecological tipping point due to environmental stressors, such as habitat loss or climate change, it’s unlikely this will occur anytime soon—at least not on land. The paper comes with a number of caveats, including that a global tipping point could occur in marine ecosystems due to ocean acidification from burning fossil fuels. In addition, regional tipping points, such as the Arctic ice melt or the Amazon rainforest drying out, are still of great concern.

“When others have said that a planetary critical transition is possible/likely, they’ve done so without any underlying model (or past/present examples, apart from catastrophic drivers like asteroid strikes),” lead author Barry Brook and Director of Climate Science at the University of Adelaide told mongabay.com. “It’s just speculation and we’ve argued […] that this conjecture is not logically grounded. No one has found the opposite of what we suggested—they’ve just proposed it.”

According to Brook and his team, a truly global tipping point must include an impact large enough to spread across the entire world, hitting various continents, in addition to causing some uniform response.

“These criteria, however, are very unlikely to be met in the real world,” says Brook.

The idea of such a tipping point comes from ecological research, which has shown that some ecosystems will flip to a new state after becoming heavily degraded. But Brook and his team say that tipping points in individual ecosystems should not be conflated with impacts across the Earth as a whole.

Barry adds that, “from a planetary perspective, this diversity in ecosystem responses creates an essentially gradual pattern of change, without any identifiable tipping points.”

The paper further argues that biodiversity loss on land may not have the large-scale impacts that some ecologists argue, since invasive species could potentially take the role of vanishing ones.

“So we can lose the unique evolutionary history (bad, from an intrinsic viewpoint) but not necessarily the role they impart in terms of ecosystem stability or provision of services,” explains Brook. The controversial argument goes against many scientists’ view that decreased biodiversity will ultimately lessen ecological services, such as pollination, water purification, and carbon sequestration.

Of course, ecologists still know little about the many ecological roles single species may play, and some research has shown that losing even one key species can have a major impact. For example, top predators like wolves and sharks appear to play an oversized role in maintaining an ecosystem’s biodiversity and services. Other studies have certain plants have evolved to be dispersed only by big herbivores, like rhinos and elephants. There are unlikely to be any replacement for elephants anytime soon

Despite arguing that global tipping points are unlikely, there is one current environmental issue that may fit the definition of an Earth-wide tipping point, only it would occur across the oceans not land: ocean acidification.

“Coral reef ecosystems appear to have disappeared globally, simultaneously, and suddenly at the Triassic–Jurassic transition, likely driven by global increases in ocean acidity and temperature in response to massive geological CO2 release to the atmosphere,” the scientists write.

Although less widely known than climate change, ocean acidification is also caused by rising carbon dioxide emissions, some of which are sequestered by the world’s oceans. Carbon dioxide changes the chemistry of oceans, reducing pH levels and imperiling the world’s coral reefs, along with crustaceans, mollusks, and even some plankton. The loss of such biodiversity could trigger a mass extinction event across marine ecosystems.

Still, Brook and his colleagues contend that a sudden focus on global tipping points is not only bad science, but unhelpful.

“We argue that it distracts from the huge ecological transformations that have already occurred, and runs the risk of leading to unjustified fatalism about catastrophic or irrevocable effects caused by tipping points,” says Brook. “We think the focus should be on working out how to harmonize human aspiration with conservation goals, rather trying to avoid the unavoidable or see planetary management as ‘us’ (humans and their domesticated species) vs. ‘them’ (the rest of the biosphere).”