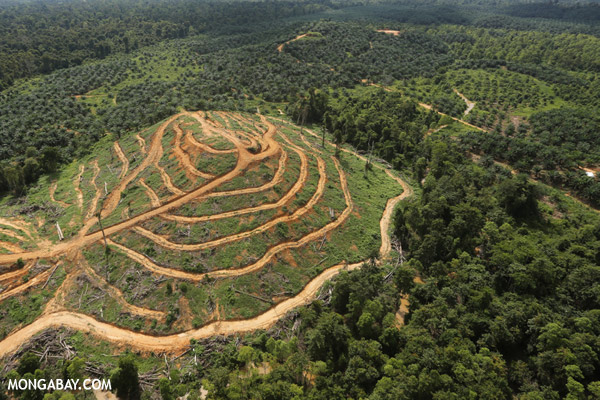 Conversion of forest to oil palm plantations in Borneo.

Croplands in the tropics expanded by an average of 4.8 million hectares per year between 1999 and 2008, increasing pressure on forest areas and other ecosystems, reports a study published in the journal PLoS ONE.

The research found that soybeans and maize (corn) expanded the most of any crops in terms of absolute area, followed by rice, sorghum, oil palm, beans, and sugar cane. The countries which added the largest area of new cropland were Nigeria, Indonesia, Ethiopia, Sudan and Brazil.

The study, which involved an international team of researchers led by Ben Phalan of the University of Cambridge, found that cropland made up 10.7 percent of the land area of tropical countries, about 10 percent less than the global figure of 12 percent. Rice is the most widely grown crop in the tropics, including rainforests and tropical dry forests.

The paper highlighted the potential environmental impact of recent expansion, noting that “some of the crops which have expanded most in area in recent years are already well known drivers of biodiversity loss” including soy in the Amazon and Cerrado, oil palm in Malaysia and Indonesia, sugar cane in Hawaii and the Atlantic forest, and corn in the dry forests of Madagascar. The study said some crops — sorghum, cow peas and millet — seemed to attract less attention in conservation circles even though they accounted for a large area of land conversion. The authors suggest some explanations:

There are several possible reasons why some crops have received relatively little attention from conservationists. First, area is an incomplete proxy for impact. Coffee, for example, covers a relatively small area (8% of that occupied by rice in tropical countries), but tends to replace habitats of particularly high biodiversity value. Tropical drylands support unique species, but not concentrations of endemics on the scale of tropical forests, so hectare for hectare, dryland crops might have less of an impact on biodiversity than crops of wetter climates. Second, most of the less well-known crops are traditionally grown mainly by small-scale farmers rather than on an industrial scale by large corporations. As a consequence, there is less of a clear link to Western consumers. Campaigns targeting the commodity supply chains of large corporations supplying European and North American retailers have been a key factor in efforts to reduce environmental impacts of commodities such as palm oil, coffee and cocoa.

The study also forecasts areas vulnerable to future conversion due to high cultivation potential. These include several priority areas for biodiversity conservation in central Africa, northern Australia, parts of the Amazon basin, the Paraguayan Chaco, and the savanna woodlands of the Sahel and East Africa. The authors note that preserving these places while meeting expected demand for commodities will be a major challenge.

“It will be difficult to reduce threats to biodiversity without strengthening public policy, such as national-level land use policies for stabilizing the agricultural frontier around the last big blocks of wilderness through appropriate strategic land-use planning, infrastructure planning, better regulation of large international land acquisitions, and protected area designation,” they write.

However the researchers point out some reasons for hope, including private sector initiatives like certification and commodity roundtables, the potential for smarter growth and reduced consumption, valuation of ecosystem services through mechanisms like the Reducing Emissions from Deforestation and Degradation (REDD+) program, eliminating wasteful and perverse subsidies for biofuels, and boosting crop productivity.