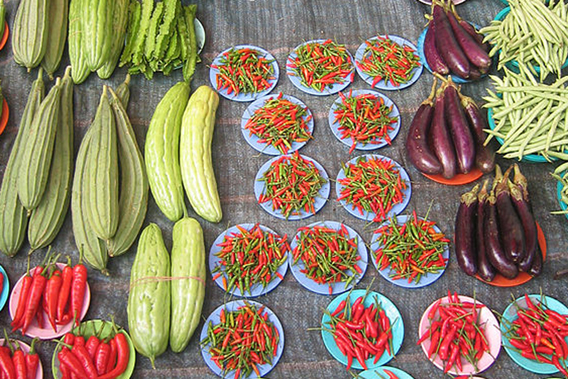 Organic vegetables for sale in Argentina. Photo by: René Piamonte.

The global farmland area certified organic has expanded more than threefold to 37 million hectares since 1999, according to new research conducted by the Worldwatch Institute. The Institute argues that organic farming has the potential to contribute to sustainable food security by improving nutrition intake and sustaining rural livelihoods, while reducing vulnerability to climate change and enhancing biodiversity.

“Organic farming is now established in international standards, and 84 countries had implemented organic regulations by 2010,” wrote Catherine Ward and Laura Reynolds, Worldwatch researchers and lead authors of the report.

The International Federation of Organic Agriculture Movements defines organic agriculture has a production system that relies on ecological processes rather than the use of synthetic inputs (e.g. chemical fertilizers and pesticides). While organic farming has been practiced throughout most of human history, its modern roots lie in the middle of the last century. The period following World War II has come to be known as the “golden age of pesticides” because the use of agricultural chemicals was rife. But as the health and ecological ramifications of agrochemicals became clear, governments started to regulate their use and consumers started to demand organically certified foods.

“Although organic agriculture often produces lower yields on land that has recently been farmed conventionally, it can outperform conventional practices—especially in times of drought—when the land has been farmed organically for a longer time,” said Reynolds, a researcher with Worldwatch’s Food and Agriculture Program in a recent press release.

Conventional agricultural practices often degrade the environment through soil erosion, excessive water extraction, and biodiversity loss. This is of great concern when at least 1 billion people do not have adequate access to sufficient food. The report touts that organic farming can reduce vulnerability to climate change and enhance biodiversity, while increasing food security.

“While it has been presented as unrealistic for organic farming to feed the world, it seems that conventional farming does much more to threaten our food supply,” Reynolds told mongabay.com.” Growing all of our food using petroleum-dependent fertilizers and machinery, and spraying chemical pesticides and herbicides to reduce beneficial biodiversity and deplete soil nutrients, amounts to building our food supply on a fragile house of cards. If the price of oil rises, or populations of critical biodiversity that support food growth (bees, earthworms) collapse, we will be unequipped to produce food.”

Currently, organic agriculture certifications are mostly concentrated in wealthier countries. As an example, from 2009 to 2010, Europe increased its organic farmland by 9 percent to 10 million hectares. And while the United States has lagged behind other countries in adopting sustainable farming methods, the U.S. organic industry is one of the fastest-growing industries in the nation, expanding by 9.5 percent in 2011 to reach $31.5 billion in sales.

Organic farming in the developing world is now recognized as one possible way to address problems of food insecurity and climate change. Bhutan, for example, announced during the Delhi Sustainable Development Summit 2013 that it would ban the sale of pesticides and herbicides putting the country on track to be the first wholly organic nation in the world.

In the decades ahead the global food system will experience massive pressure to meet the demands of a growing population. Almost three-quarters of the world’s poor depend on agriculture for their income. Before broadening to sustainable agriculture it might be necessary to make sure that the constraints that presently encumber organic farming practices—problems like getting enough organic supplements, lack of access to certification, and limited local market access for organic produce—are tackled. As Ward and Reynolds conclude, “Increasing food production alone is not sufficient to combat hunger.”

(02/20/2013) Organic tomatoes are sweeter (more sugar) and more nutritious (more vitamin C and anti-oxidants) than tomatoes grown with pesticides and chemical fertilizers, according to a new study published in the open-access journal PLOS ONE. The scientists theorize that stress may be why organic farming produces a more nutritious and tastier tomato.