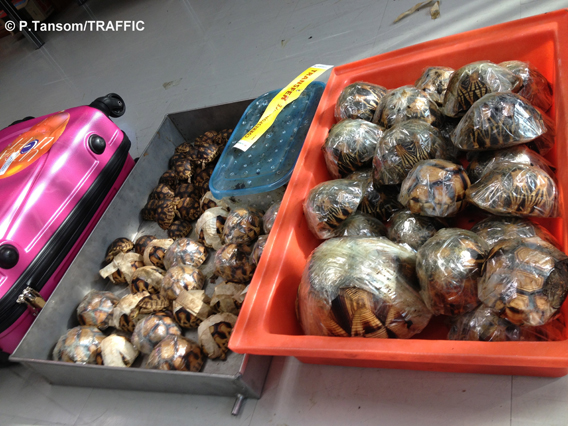 Ploughshare and radiated tortoises confiscated in Bangkok. Photo by: P.Tansom/TRAFFIC.

On Friday, March 15th Thai authorities arrested a 38-year-old man attempting to collect a bag containing 54 ploughshare tortoises (Astrochelys yniphora) and 21 radiated tortoises (Astrochelys radiata) in Suvarnabhumi International Airport. Found only in Madagascar both species are listed as Critically Endangered and protected under the Convention on International Trade in Endangered Species (CITES), but have become lucrative targets for the black-market pet trade given their scarcity and beauty.

Meanwhile, the radiated tortoise once numbered in the millions. But collection for the pet trade, habitat loss, and local hunting has decimated its population. Scientists now say that without targeted conservation work the species could go extinct by mid-Century.

The Thai man attempting to collect the bags, O. Visarnkol, was arrested on site. Prior to his arrest he was already on bail for smuggling protected species. The bag was registered to a Malagasy woman, Clara Rahantamalala, 25, who was traveling from Madagascar to Bangkok; she was also arrested.

“We encourage the authorities to throw the book at these two. Making an example of them will hopefully serve as a deterrent for other smugglers,” Shepherd told mongabay.com. “Releasing people on bail does not seem to be part of an effective strategy to reduce the smuggling and illegal trade.”

Fortunately since the turtles were meant for the illegal pet trade and not consumption, they were still alive when confiscated.

“The Thai authorities have placed the animals in a government rescue centre—the Bang Pra Breeding Center in Chonburi,” Shepherd explains. “It is hoped they will be repatriated back to Madagascar as soon as possible. The longer they are held in Thailand, where the climate and conditions are not the same as in Madagascar, and therefore not suitable, the higher the likelihood of higher mortality rates. Furthermore, there are experts in Madagascar ready to accept and care for the seized tortoises.”

Shepherd adds that because of their small populations in Madagascar, “every individual is incredibly valuable to the survival of the species.”

Last month, a gala ball and art auction was held in New York City to raise money for turtle conservation with the ploughshare tortoise as its highlight species.

Shepherd says that while conservation progress is being made on the ground in Madagascar, he notes that any successful attempt to save these species must be international in scope “involving Madagascar, the countries used as transit points, and the consumer countries, such as Thailand, Malaysia and Indonesia.”

(03/08/2013) Dozens of freshwater turtle and tortoise species won greater protection under the Convention on International Trade in Endangered Species of Wild Fauna and Flora (CITES), reports the U.S. Fish and Wildlife Service.

(09/17/2012) Sometimes turtles fall through the cracks: a new study in the open access journal Tropical Conservation Science, has uncovered a number of ‘gap species’ in the turtle families inhabiting Africa. ‘Gap species’ are those that are recorded in one country or another, but not in adjacent countries which could be due to a lack of data, a change in ecosystems, or human impacts.