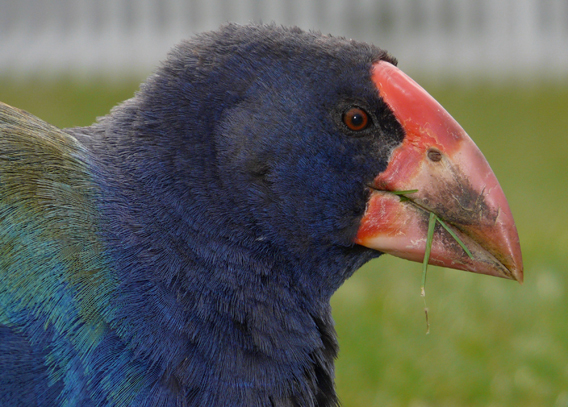 One of the survivors: the Takahē, a flightless rail from New Zealand. Photo by: © ZSL.

Around 4,000 years ago intrepid Polynesian seafarers made their way into an untamed wilderness: the far-flung Pacific Islands. Over a thousands or so years, they rowed from one island to another, stepping on shores never yet seen by humans. While this vast colonization brought about a new era of human history, it also ended the existence of well-over a thousand bird species according to a new study in the Proceedings of the National Academy of Sciences (PNAS).

Scientists have long known that the arrival of people on these remote wildernesses brought about extinctions—such as the duck-like moa-nalos in Hawaii—but have had difficulty estimating the full-scale of the avian extinction.

“Relatively few fossils have been collected from most islands that have been studied,” the scientists write. “Consequently, many extinct bird species remain to be discovered, confounding attempts to quantify more precisely the number and type of species lost across the region.”

But employing sophisticated modeling techniques, a team of international scientists were able to bridge the gaps in the fossil record and estimate just how many bird species may have vanished.

“We studied fossils from 41 tropical Pacific islands and using new techniques we were able to gauge how many extra species of bird disappeared without leaving any trace,” explains co-author Tim Blackburn, Director of the Zoological Society of London’s (ZSL) Institute of Zoology. “If we take into account all the other islands in the tropical Pacific, as well as seabirds and songbirds, the total extinction toll is likely to have been around 1,300 bird species.”

The birds succumbed to a combination of deforestation and hunting. The largest group of victims were non-passerine land birds, including waterfowl, pheasants, and grouse. In the absence of predators, many of these species had probably lost the ability to fly making them easy meals for the Polynesians. In fact, the study found that flightless birds were 33 times more likely to vanish with the arrival of human super-predators. In addition, birds found on only a single island (endemics) were 24 times more likely to go extinct.

The extinction event was by no means minor. If the researchers’ estimate of 1,300 species proves correct, it would mean over 10 percent of the world’s birds vanished within a few hundred years. Currently, around 10,000 birds survive around the world.

The wave of extinctions continued long after the Polynesians settled into their new homes. The arrival of Europeans killed off another 40 or so species, including the famous dodo (Raphus cucullatus) on Mauritius, although in the Indian Ocean this was also colonized by Polynesians. Today many of the bird survivors on Pacific Islands remain hugely imperiled, such as the Manumea (Didunculus strigirostrisor), also known as the “little dodo,” which may be down to less than 200 birds on Samoa.

Extinction warning: racing to save the little dodo from its cousin’s fate

(03/04/2013) Sometime in the late 1600s the world’s last dodo perished on the island of Mauritius. No one knows how it spent its final moments—rather in the grip of some invasive predator or simply fading away from loneliness—but with its passing came an icon of extinction, that final breath passed by the last of its kind. The dodo, a giant flightless pigeon, was a marvel of the animal world: now another island ground pigeon, known as the little dodo, is facing its namesake’s fate. Found only in Samoa, composed of ten islands, the bird has many names: the tooth-billed pigeon, the Manumea (local name), and Didunculus (“little dodo”) strigirostris, which lead one scientist to Christen it the Dodlet. But according to recent surveys without rapid action the Dodlet may soon be as extinct as the dodo.

Imagine a bird without feathers…

(02/18/2013) In The Unfeathered Bird, Katrina van Grouw exquisitely combines creative and intellectual curiosity and produces a wonderful book. The Unfeathered Bird simply is a delight. Each page I turned over was like reliving the awe and discovery of childhood. Broad strokes of creativity confined and structured within the natural anatomy of birds. Raw curiosity and intrigue drawn patiently one pencil stroke at a time illustrating our unfeathered friends.

(02/13/2013) Want to find a new species of owl? Just listen. A unique whistling call have led scientists to discover a new owl on the Indonesian island of Lombok, according to a new study in PLoS ONE. Two scientific expeditions, occurring separately but within a few days of each other, both noticed something different about the calls coming from owls on Lombok.