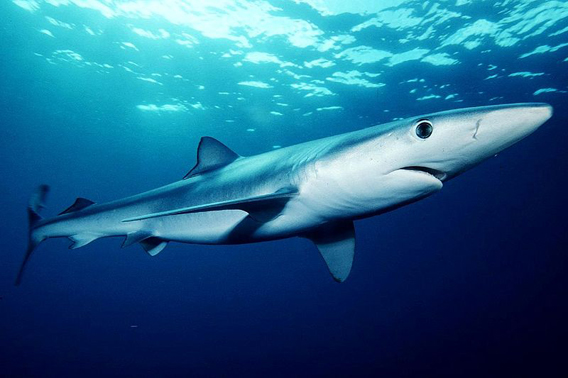 Sharks are primarily caught as by-catch for other fishing industries. By one account, 70% of the total catch in swordfish long-line fisheries was sharks. Due to consumer demand, this by-catch is sold to Asian fish markets as fin and trunk meat. Much of the trunk and organ meat is used to make fish-meal, which is then fed to farmed fish.

Heavy metals and other environmental toxins accumulate in plant and animal tissues through the well-documented process of bioaccumulation. Sharks are prone to bioaccumulation through diet (biomagnification) as they incorporate metals very efficiently and eliminate them slowly. While the World Health Organization (WHO) has set limits for levels of heavy metals permitted in fish meat, in the southeastern Pacific Ocean, these limits are not regulated; so three researchers from Chile decided to investigate shark meat intended for consumption.

For their study, they collected 69 blue sharks (Prionace glauca) and 39 mako short fin sharks (Isurus oxyrinchus) from swordfish fisheries by-catch off the coast of Chile. Dorsal muscles, livers and stomachs were analyzed for lead (Pb) and mercury (Hb) levels.

Lead concentrations in both species exceeded recommended limits, constituting a risk for human health. Metals were more concentrated in organ meats and in the larger-sized sharks. Levels of mercury were lower than the limit; however, as the authors point out, these limits do not take into account the highly-toxic, synergistic effects of mercury and lead when combined in tissues.

Sharks are apex predators whose trophic habits structure marine food webs. The altering of greater marine ecosystems that come with a declining shark populations alongside the considerable health risks posed by eating sharks suggest that perhaps we should leave them alone, at the very top of the food chain.

(03/11/2013) Today, for the first time, sharks and rays have won the vote for better protection under CITES (the Convention on International Trade in Endangered Species), the world’s regulating body on trade in threatened species. Five shark species and manta rays, which includes two species, have received enough votes to be listed under Appendix II of CITES, which means tougher regulations, but not an outright ban. However, the votes could still be overturned before the end of the meeting.