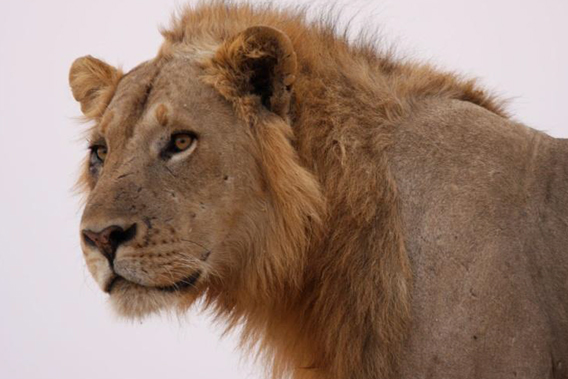 African lions (Panthera leo) living outside of protected areas like national parks or reserves also happen to be studied much less than those residing within protected areas, to the detriment of lion conservation initiatives. In response to this trend, a group of researchers surveyed an understudied, unprotected region in northwestern Mozambique called the Tete Province, whose geography and proximity to two national parks suggests a presence of lions. Through interviews with villagers, the use of Google Maps, and a comparative analysis of similar studies, the researchers were able to generate what is likely the most accurate account of the Tete Province lions’ fate to date, which was recently published in mongabay.com’s open-access journal Tropical Conservation Science.

“For effective lion conservation, knowledge of the distribution and density of lions, the relative importance of various threats (i.e. human-lion conflict), and the density of prey is crucial,” states the research.

To gauge the distribution of lions in the area, the researchers conducted 61 interviews over a range of three districts: Zumbo, Maravia, and Chifunde. The villagers were asked questions about wildlife they saw, heard, or found tracks of, and in which direction these occurred. The researchers also asked them how many fatalities and attacks they or their wildlife experienced, whether from disease or depredation, and if the latter, which animal was responsible. The researchers then applied the villagers’ observations of lions to satellite images of Tete—in which areas of strong human presence and development were sectioned off—to gain a probable range of lion habitat.

Lion density of the region was determined in two additional ways: the estimates from a 2009 study of the area were overlaid with the researchers’ distribution range, and these were then combined with the broader estimates of a continent-wide lion density study. In this way, the researchers estimated that 181 lions still roamed Tete. Given the area involved, this is a small population. Currently considered Vulnerable by the IUCN Red List, recent studies have estimated that lion populations across Africa have dropped by 68 percent in just 50 years.

Villagers in Tete indicated that lions were the usual culprits of dead livestock (goats, in particular) at 29.2%. Still locals were twice as likely to lose livestock to disease than depredation (82% vs 42%). Also, no villager reported any human fatalities from lions.

Aerial surveys of prey densities from 2003 and 2008 are low, which researchers say bolster the low estimate. However, villager accounts show that prey populations are increasing, which might indicate lion populations will subsequently also increase. The researchers note, “A third of observations consist[ed] of more than one lion and some include[ed] cubs. One interviewee claimed seeing a pride of eight lions.”

Implementing proper management strategies for an increase in the lion population is one of the main concerns the researchers have about conservation.

“Sustaining or enlarging a viable local lion population may erode living conditions for rural people unless human-lion conflict is addressed,” they write. “There are many options to mitigate conflict, but they require a locally appropriate approach and resources to plan and execute these actions.” They recommend the use of the Human-Lion Conflict Toolkit as a good source of guidance for this concern.

The other concern, as for so many other threatened species elsewhere, comes down to politics and land use in Tete. Logging, mining, agriculture, and trophy hunting pose a likely threat to conservation efforts, and Mozambique’s vast coal deposits in particular, for which investment for development is already rapidly accelerating.

“Political choices and resultant land use policies will ultimately decide the size and extent of future lion populations in Tete,” concludes the study, but the researchers’ insistence on further shedding light on these largely-forgotten lions hints at a slightly more optimistic outlook.