North Sumatra villagers demand farmers be released, customary land be returned, after 16 arrested in conflict with TPL, a plantation company affiliated with APRIL. 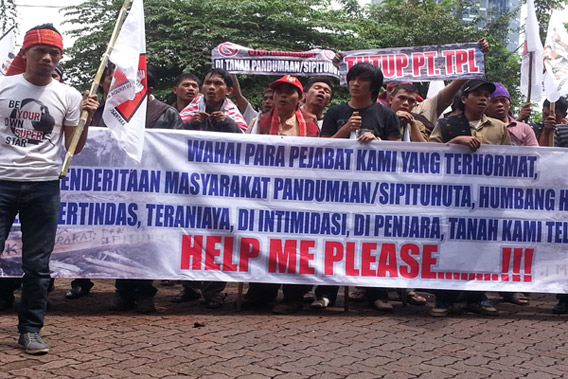 Dozens of villagers from Indonesia’s North Sumatra province traveled to Jakarta this week to demand the release of 16 farmers who remain in detention after conflicts erupted between indigenous communities in Humbang Hasundutan district and PT Toba Pulp Lestari, a unit of the pulp and paper giant Asia Pacific Resources International Holdings (APRIL).

Residents of the Pandumaan and Siputuhuta villages, where the conflict took place, demonstrated in front of the Ministry of Forestry on Tuesday, demanding the release of the farmers arrested on Monday last week and an end to the long-running conflict between the company and the local community.

The recent clash was sparked when area farmers caught Toba Pulp Lestari (TPL) employees entering a frankincense forest in Dolok Ginjang, an area the farmers consider to be part of their customary land, on Feb. 23. The TPL employees were seen cutting down the frankincense trees, which have significant economic and cultural value for the local community, and replanting the area with eucalyptus. The farmers said they protested the actions of the employees but their objections were ignored.

When TPL employees returned to the forest on Sunday and Monday, clashes broke out between the employees and local farmers. The police mobile brigade, known as Brimob, arrested 31 farmers from Pandumaan and Sipituhuta on Monday as a result of the clashes. Police later released 15 of the farmers, though the remaining 16 were named as suspects and remain in detention. 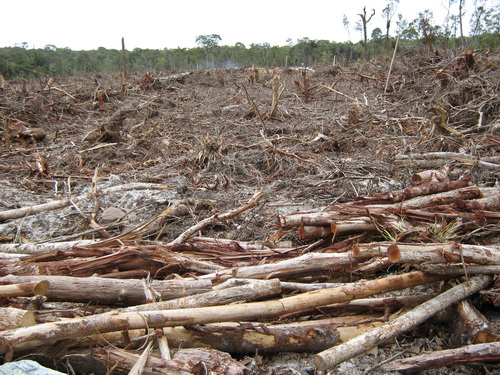 A plot of community forest leveled by PT TPL. Photo from Bakumsu.or.id

In meetings with Ministry of Forestry officials on Tuesday, representatives of the community also demanded the return of around 4,000 hectares of land and forest areas that have traditionally belonged to the community.

TPL has a 200,000-hectare concession in the area, though residents have challenged the concession where it overlaps with their customary land. The community earlier brought their complaints to the Humbang Hasundutan district Regional Representatives Council (DPRD) and the National Forestry Council (DKN), who carried out mapping activities to determine the concession boundaries. They concluded that the TPL concession did not apply to the areas considered to be customary land and submitted their findings to the Ministry of Forestry in a letter from the Humbang Hasundutan district head in June last year.

However residents have yet to receive clarification from the ministry on the concession boundaries. Sumarto, head of public relations at the Ministry of Forestry, who met with representatives from Pandumaan and Siputuhuta in Jakarta on Tuesday, said he intends to help resolve the conflict with TPL, however admitted that he was not familiar with the details of this case. He said he could offer examples from past conflicts that had been successfully resolved, but added that the district head in Humbang Hasundutan must be the one to take action against the company. “I ask whether or not there has already been a letter from the district head to PT TPL, which reprimands the company,” Sumarto said.

Sumarto’s response demonstrates the challenge of addressing land disputes in Indonesia, where regional autonomy laws leave much of the authority at the district level. In the Pandumaan-Sipituhuta case, “all the mediation processes from national commissions such as Komnas HAM [the National Commission on Human Rights], multi-stakeholder groups such as DKN and recommendations from the local government, as well as others, have not been capable of satisfactorily resolving this conflict,” said Myrna Safitri, the secretary of the Indonesian Forum for Agrarian Justice and the director of the Epistema Institute, a legal and environmental think tank in Jakarta.

Meanwhile Edu Pandiangan, a representative from Pandumaan, stressed the need for the authorities to intervene to resolve the conflict, which has been ongoing since 2009.

“Our forest is being ruined,” Edu said in Jakarta on Tuesday. “The police are silent, the Ministry of Forestry is silent.”