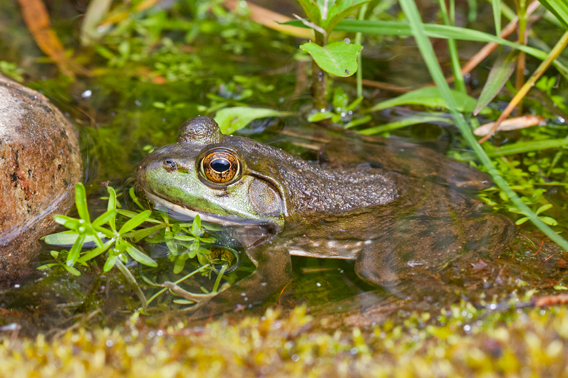 The bullfrog is believed to be spreading chytrid fungus to wild frogs in Southeast Asia. Photo courtesy of WCS.

Scientists have documented a series of links between exotic frogs for trade and diseases in wild frogs in Southeast Asia, including the first documented case of the chytrid fungus—a virulent and lethal disease—in Singapore. According to researchers writing in a new study in EcoHealth, frogs imported into Southeast Asia as pets, food, or traditional medicine are very likely spreading diseases to wild populations.

Collecting samples of some 2,300 wild and captive frogs across four countries (Laos, Cambodia, Vietnam, and Singapore), researchers found that disease was widespread. Most worryingly, the researchers found chytrid fungus on two wild frogs and eleven captive frogs in Sinapore. In fact, four out of seven pet stores visited on the island nations sold frogs already infected with chytrid. They believe the American bullfrog is the primarily culprit.

“Since the American bullfrog is able to tolerate this pathogen, it may act as a carrier for spreading chytrid to the region when it is imported through commercial trade,” explains lead author Martin Gilbert with the Wildlife Conservation Society (WCS).

Chytrid fungus has spread rapidly around the world, decimating even remote and protected frog populations. It is believed to be responsible, at least in part, for a number of extinctions worldwide.

Fortunately the team didn’t detect chytrid fungus in Laos or Vietnam, but did find one imported frog—to be sold as food—that was carrying the disease. Another worrisome disease, ranavirus, was not discovered during testing.

However, the researchers also report that amphibians in Vietnamese frog farms were rife with skin lesions. Every frog tested—497 individuals—at 23 different facilities sported some type of skin disease from inflammation to missing digits.

“In light of the fact that this emerging infectious disease is now known to be spread by commercial trade, it is in everyone’s best interest to eliminate it from the trade in live animals before both the native amphibian populations of Southeast Asia are affected and before it completely decimates the commercial trade and people are unable to make a living,” said co-author David Bickford with the NUS Faculty of Science, adding, “This is not just about the frogs.”

Amphibians are among the world’s most endangered family groups: habitat loss, over-exploitation, invasive species, pollution, and disease has put nearly 41 percent of the world’s amphibians are considered threatened with extinction.