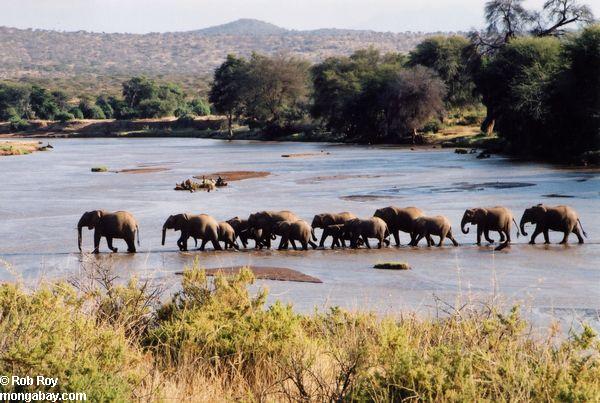 Elephant herd in Kenya. It’s estimated that around 25,000 elephants were killed by poachers in 2011, though the number could be even higher. Photo by: Rob Roy.

Responding to an investigative report by National Geographic, the Vatican has condemned elephant poaching for ivory and pledged three steps to help in the battle to save the world’s elephants. The National Geographic article Ivory Worship by Bryan Christy, looked at how religions—specifically religious items for Christians and Buddhists—were playing in the growing demand for black-market ivory, which is currently resulting in the violent deaths of tens-of-thousands of endangered elephants every year.

“We are absolutely convinced that the massacre of elephants is a very serious matter, against which it is right that everyone who can do something should be committed,” reads a letter by Father Federico Lombardi, the director of the Holy See Press Office in the Vatican.

He notes that according to Catholic tradition, “Creation is entrusted to humanity to be cultivated and safeguarded as a precious gift received from the Creator and therefore should not be destroyed, treated violently, or exploited but rather treated with great responsibility toward the creatures themselves and toward future human generations so that they might be able to enjoy these essential and marvelous goods.”

The Vatican has announced three steps to help fight the ivory trade, according to Lombardi’s articles. The Vatican plans to bring the issue to the Pontifical Council for Justice and Peace to help study the problem; spread awareness of the problem via the Vatican Radio in Africa; and to increase awareness about the Pontifical Academy of Sciences which studies such issues. Still, the ecclesiastical state denies that it has played any role in exacerbating the current elephant poaching crisis.

In the much-discussed National Geographic investigative report, Christy writes at length about a Filipino priest with a wild passion for ivory. But the Vatican says one shouldn’t conflate one priest’s actions with the Vatican.

“A priest in the Philippines who seems to be responsible for illegal trade in ivory has absolutely nothing to do with the responsibility of the ‘Vatican,’ which knows nothing about and has nothing to do with him,” Father Lombardi writes. “What is done by priests or Catholic institutions throughout the world in this area is legally subject to the laws and controls of the countries where they are.”

In addition, Father Lombardi adds that a shop keeper selling ivory near the Vatican—mentioned in the article—is under Italian jurisdiction.

“The ‘Vatican’ has no responsibility and no control to exercise over the Savelli shop or over the other businesses that are located in the neighborhood around the Vatican. If the Italian authorities discover any illegal activity they do well to intervene. But thinking that there is an important ivory trafficking center to uproot here in order to save African elephants makes no sense,” Father Lombardi writes.

He further defends that Catholic Church, by arguing that the church has never advocated the use of ivory in decorative or religious items.

“There has never […] been encouragement on the part of the Church to use ivory instead of any other material. There has never been any reason to think that the value of religious devotion might be connected to the preciousness of the material of the image you use. Much less is there any organization promoted or encouraged by the authorities of the Catholic Church to trade or import ivory,” Lombardi writes.

Pope Benedict XVI has generally been regarded as the ‘greenest’ pope in history since his election in 2005. He has consistently talked about the urgency of climate change and biodiversity loss, while calling for a remaking of the world’s economic systems to recognize the many values of nature. He has even linked ongoing environmental degradation to a global culture of materialism, arguing that “in a world closed in on its materialism, it is easier for the human being to make himself the dictator of all other creatures and of nature.”