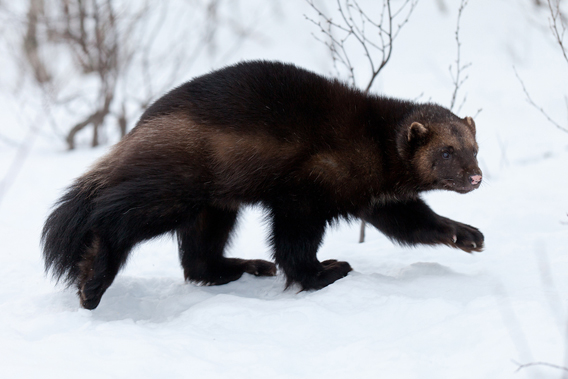 Wolverine in the snow. Photo by: Bigstock.

Arguably one of the toughest animals on Earth, the wolverine (Gulo gulo) may soon find itself protected under the U.S.’s Endangered Species Act (ESA) as climate change melts away its preferred habitat. Last week, the U.S. Fish and Wildlife Service (FWS) announced it was proposing to place the world’s largest terrestrial mustelid on the list. Only 250-300 wolverines are believed to survive in the contiguous U.S.

Wolverines live, hunt, and breed in high mountainous areas near the tree-line. Since female wolverines depend on large snowpacks for building dens and raising kits, researchers fear that worsening climate change will constrict the wolverine’s range.

The listing, if it goes ahead, would prohibit hunting and trapping of the animal, but will not limit snowmobiling, skiing, logging, or development in wolverine habitat as it the U.S. FWS does not believe such activities “constitute significant threats to the wolverine,” according to a press release.

“This proposal would give us the flexibility to tailor the protections for the wolverine provided by the ESA to only those things that are necessary,” said Walsh.

Living solitary lives, wolverines are wanderers, moving up to 15 miles (24 kilometers) in a single day. While they often scavenge corpses—and can even bite through frozen bones—wolverines have also been known to take on prey as big as caribou and even defend a kill from a bear. Wolverine will also feed on berries and insects when available.

The FWS proposal also mentions possibly reintroducing wolverine into historic habitat in Colorado. The wolverine was decimated by hunting and trapping in the 19th Century. They are found across the high Northern Hemisphere from Siberia to Scandinavia to Canada.