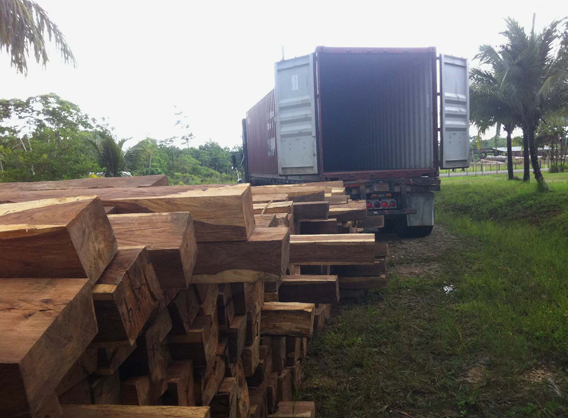 Rosewood logging in Belize. Photo by: Will Maheia.

In Belize, the uncontrolled and often illegal harvesting of rosewood has been, and still is, one of the major environmental issues in the country. In March of last year, the government established a moratorium on the export and extraction of rosewood, however illegal harvesting continued. On Friday 11 January, the Minister of Forestry, Fisheries and Sustainable Development made the bold move of burning confiscated illegally cut rosewood flitches. The purpose of this action was to send a clear message to the world and illegal loggers that
Belize will not tolerate illegal logging of its precious forests and that no one will profit from this illegal trade.

How has Belize ended up in a situation where such drastic action was necessary? The Maya communities of Toledo have used rosewood for traditional purposes for many years, but the levels of harvesting seen from 2010 onwards have been way beyond anything that could be classified as “traditional use.” Harvesting a few trees each year from the forests surrounding the villages to build houses is one thing; harvesting hundreds of trees each month for export to China is quite another.

It is no secret that in the past Belize has permitted the export of raw rosewood lumber. However, from 1992 to 1996, export was prohibited under Statutory Instrument 87, presumably to encourage added value in country, and to prevent Belize’s stocks from being exhausted. The ban on export was lifted in 1996. Records from the Forest Department suggest a steady rise in exports over the years, peaking in early 2012. China’s import data reflects this trend and very clearly shows where the vast majority of rosewood has ended up. Considerable value is added in China through production of veneers and high-end furniture. Chinese companies make a fat profit. Belize is left with a fraction of the money it could have made, roads are badly damaged by the movement of logging trucks, and forests are heavily degraded.

Between 2010 and 2012, thousands of rosewood flitches were hauled from the forests of Toledo. Some of this lumber was legally harvested, either under a short or long-term license, or under the petty permit system. The permit system was widely abused, and a great deal of this lumber was taken illegally, without permission from anyone. It is a fact that regardless of allegations of inherent corruption, the Belize Forest Department simply do not have the resources to manage or monitor felling of trees and movement of lumber on such a vast scale. The market eventually became flooded. With so much rosewood lumber available, the value per board foot dropped, and in many cases, the amount paid to the logger was also reduced. Some of those loggers came from Belize’s most poverty-stricken communities. Were they even aware that their activities were illegal?

Allowing the export of vast quantities of raw lumber is a major driver of unsustainable logging; unsustainable logging damages forest ecosystems; and damaged ecosystems are bad news for the human population. Tighter control of harvesting and export is the only way to deal with such issues. It would have been impossible for the Forest Department to even begin to regulate trade in rosewood at a time when logging and export was such a free-for-all. The moratorium provides the Forest Department with a window to assess the situation on the ground. Those who had lumber stockpiled were permitted a short time in which to have it properly assessed and exported, with the appropriate royalties paid to the Government.

But a moratorium can only do so much. Without the appropriate resources to enforce laws, legislation can become next-to-useless. Since logging season re-opened in mid-October this year, there have been several incidents of illegal logging. Some effort has been made to deal with the law-breakers. It is a fact that neither the Forest Department nor the Police have sufficient, committed, appropriately equipped staff on the ground to put up a strong fight against organized, well-financed illegal logging operations. This needs to change.

How many rosewood trees are left standing in the forests of Toledo? No one knows for certain, and until such time as the Forest Department completes an inventory, the question will remain unanswered. A few facts are very clear; in Belize, rosewood is confined to a small area; if logging and export recommences and reaches the same level as seen over the past two years, commercial stocks are unlikely to last more than 20 years. This would be the final nail in the rosewood coffin. The remaining stumps, seedlings and saplings are not likely to be commercially useful for perhaps 20–40 years. In other words, the short-sighted, short-term thinking of the few could ruin the potential long-term financial gain of many.

The moratorium was an essential and long-overdue step on the long road towards sustainable management of rosewood. Belize is a nation founded on the exploitation of its timber resources. The Forest Department was established in 1935 to oversee a more organized approach to logging. Several decades later, scientific data suggests that in order to preserve the health of forest ecosystems (and in turn the health of the human population) forestry must be not just organized but also sustainable. This can be a turning point for forestry in Belize. The country finally has a Minister who genuinely cares about the environment and can steer the Forest Department in the right direction.

The future of rosewood in Belize will depend on many things. Above all it will depend on the continuing political will to protect the species and ensure that future generations of Belizeans can also benefit from the use of this increasingly valuable timber.

(08/09/2012) Deforestation in Belize has accelerated since late 2010, reports a new satellite-based assessment of the tiny Central American country’s forest cover by CATHALAC (the Water Center for the Humid Tropics of Latin America and the Caribbean).

(01/06/2011) Scientists have confirmed the presence of a harpy eagle nest in the Maya Mountains of Belize. The discovery represents the most northerly breeding pair in the Americas, and signals a comeback for a species which has become locally extinct in much of Central America due to human activity.