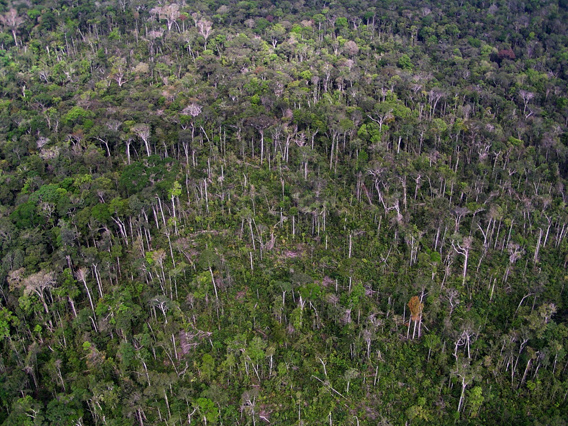 This image taken from a helicopter shows the same blowdown region a few years after the event that is imaged on the Landsat mortality map. The regrowing vegetation has covered up most of the downed trees, but some tree stems are still visible. Courtesy of the authors.

The rate of tree mortality in the Amazon rainforest due to storm damage and drought is 9-17 percent higher than conventionally believed, reports a study published in the Proceedings of the National Academy of Sciences (PNAS).

Comparing Landsat satellite images with on-the-ground observations, researchers from the Lawrence Berkeley National Laboratory, INPA, Tulane University, and other institutions found that roughly half a million dead trees across a 1000-square-mile plot of Brazilian rainforest went unaccounted for over a 20 year period. The fundings suggest that carbon emissions from storm damage could be higher than previously estimated.

“If these results hold for most tropical forests, then it would indicate that because we missed some of the mortality, then the contribution of these forests to the net sink might be less than previous studies have suggested,” said lead author Jeffrey Chambers of the U.S. Department of Energy’s Lawrence Berkeley National Laboratory, noting that a single storm in 2005 killed hundreds of millions of trees across the Amazon. “An old-growth forest has a mosaic of patches all doing different things. So if you want to understand the average behavior of that system you need to sample at a much larger spatial scale over larger time intervals than was previously appreciated. You don’t see this mosaic if you walk through the forest or study only one patch. You really need to look at the forest at the landscape scale.”

With climate models projecting stronger storms and more intense droughts as temperatures rise in the tropics, the results raise concerns about rainforests’ ability to store carbon, according to Chambers, who went on to add that the study will help improve the understanding of forests’ role in the climate system.

“These climate change signals will start popping out of the noise faster and faster as the years go on,” Chambers said. “So, what’s going to happen to old-growth tropical forests? On one hand they are being fertilized by some unknown extent by the rising CO2 concentration, and on the other hand a warming climate will likely accelerate tree mortality. So which of these processes will win out in the long-term: growth or death? Our study provides the tools to continue to make these critical observations and answer this question as climate change processes fully kick in over the coming years.”

(12/14/2012) Some Amazon rainforest tree species are more than eight million years old found a genetic study published in the December 2012 edition of Ecology and Evolution.

(08/12/2009) Old growth forests in the Amazon store nearly 10 billion tons of carbon in dead trees and branches, a total greater than global annual emissions from fossil fuel combustion, according to scientists who have conducted the first pan-Amazon analysis of “necromass.”

(04/13/2009) An experimental study of pinon pines at Biosphere 2 in Arizona shows that an increase in temperature makes the species more susceptible to die-off during drought. When temperatures were increased by 4 degrees Celsius (7.2 degrees Fahrenheit), the piñon pines died 28 percent faster than trees which experienced drought-conditions at current temperatures, according to a new study published in Proceedings of the National Academy of Sciences (PNAS).