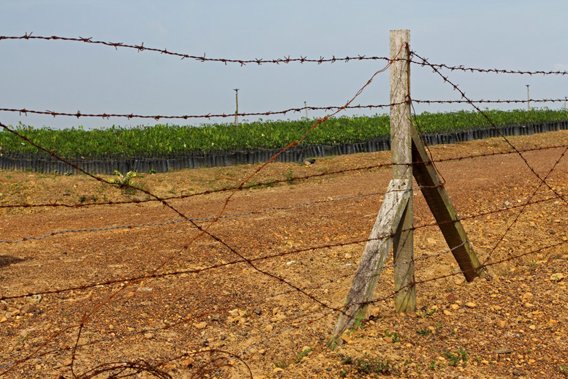 A fence keeps locals from their traditional lands in Liberia, where Sime Darby has planted a contested palm oil plantation. Photo courtesy of the Rights and Resources Initiative (RRI).

Investing in companies that flout local community rights in developing countries often leads to severe economic losses, according to a new report from the Rights and Resources Initiative (RRI). A rising trend in “land grabbing” from Africa to South America by corporations and even foreign governments results in social instability, which can lead to large-scale protests, violence, and even murder, delaying and sometimes derailing projects. Such instability poses massive risk to any investor, not to mention supporting corporate entities that are accused of ignoring human rights.

“When we looked at companies involved in international land acquisitions, we found that they experience an astonishing amount of financial damage, ranging from massively increased operating costs—as much as 29 times above a normal baseline scenario—to outright abandonment of functional operations when they ignore pre-existing or customary local land rights,” explained Lou Munden, Chief Executive of The Munden Project, which produced the report for the RRI.

The study points to a number of real-world occurrences in which companies have undercut their own performance by ignoring local land rights, including mining giant Vedanta in India, SN Power in Chile, SEKAB biofuels company in Tanzania, and palm oil producer Sime Darby in Liberia. In each case, corporations failed to properly consult locals and often overlooked environmental impacts while local governments rubber-stamped the controversial projects.

“It is unfortunate to see national governments still embracing failed development models, especially when the evidence is so overwhelming. In this equation, political stability, democracy and long-term economic gain is often sacrificed for short-term cash,” Andy White, coordinator of RRI, said adding that “it’s even more astounding given that investors often fail to prosper as well.”

A second report by RRI warns that history looks set to repeat itself in Myanmar, which recently opened its doors a little wider to the global community. However, land conflict is rife in the northern state of Kachin where locals are vociferously opposing mining, logging, and hydropower projects on their traditional lands.

“The conflict in the north of Myanmar, like so many around the world, has its roots in land and resource rights—including community forest rights,” explains Maung Maung Than, project coordinator for RECOFTC-The Center for People and Forests. “The leadership of previous governments guiding Myanmar started a race to sell off our natural resources, and our livelihoods have become collateral damage in the process. As our country opens up to the outside world, we need to stay focused on reducing poverty, not increasing it.”

Investing in such projects may not just result in financial losses, but also in supporting human rights violations, even assassinations. Activists who speak out against land-grabbing face not just imprisonment and harassment, but even death in some countries.

Just last year, Cambodian activist, Chut Wutty, was shot dead by military police while escorting journalists to logging sites in the country. A journalist, who had covered illegal logging, was also found dead in the trunk of his car in Cambodia. Other high-profile murders of activists occurred in the Philippines, Brazil, Mexico, and Laos just last year.

Such conflicts are continuing worldwide. A massive palm oil plantation in Cameroon run by U.S.-based Herakles Farms has recently faced community backlash and protests, leading to the arrest of protest leaders. The construction of the mega-dam Belo Monte in Brazil has been halted numerous times by indigenous occupations, who have been fighting the proposed dam for decades.

“When community land rights are violated, everyone involved assumes a high degree of risk, from the local and national government to the private enterprises and even their supply chain,” said Jeffrey Hatcher, director of global programs for RRI. “Respecting and securing local land rights minimizes risks. It is a sound proposition for governments and businesses alike.”