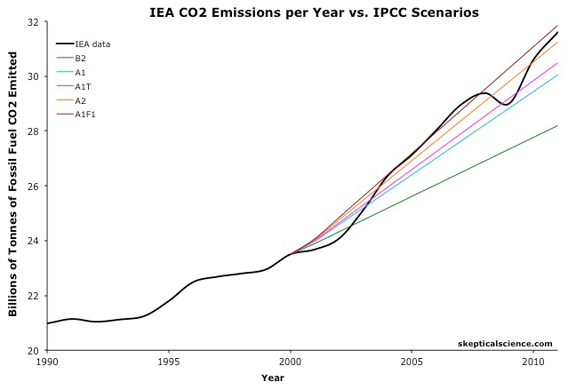 Actual global carbon emissions (in black) have tracked close to the worst case scenario (brown) laid out by the Intergovernmental Panel on Climate Change (IPCC). Dips are related to global recessions. Graph by: Dana Nuccitelli/Skeptical Science.

Climate change not debt or austerity is “the greatest economic challenge of the 21st Century,” according to Christine Lagarde, the head of the International Monetary Fund (IMF). Speaking at the World Economic Forum in Davos, Switzerland, Lagarde painted a stark picture of the challenges the world faces when up against rising temperatures.

“The science is sobering—the global temperature in 2012 was among the hottest since records began in 1880. Make no mistake: without concerted action, the very future of our planet is in peril,” she said. “So we need growth, but we also need green growth that respects environmental sustainability. Good ecology is good economics. This is one reason why getting carbon pricing right and removing fossil fuel subsidies are so important.”

Lagarde, who said that “vulnerability” to “resource scarcity and climate change” could lead to “major social and economic disruption,” was France’s finance minister under Nicholas Sarkozy.

More and more of the world’s top economists are warning that the failure to act quickly on climate change is putting the global economy at risk. Last year the head of the World Bank, Jim Yong Kim, laid out a stark warning on climate change as well.

“Lack of action on climate change threatens to make the world our children inherit a completely different world than we are living in today,” he said. “Climate change is one of the single biggest challenges facing development, and we need to assume the moral responsibility to take action on behalf of future generations, especially the poorest.”

Kim’s statements followed the release of a report by the World Bank that painted an almost-apocalyptic picture of a world where global temperatures have risen 4 degrees Celsius (7.2 degrees Fahrenheit) above pre-industrial levels. According to the report, in a 4 degree Celsius world society would face constant disruptions to global agriculture, flooding of coastal cities, an acidifying ocean, and an anemic, at best, economy. While nations have pledged to keep global temperatures from rising above 2 degrees Celsius, scientists say they are moving too slowly and weakly to succeed.