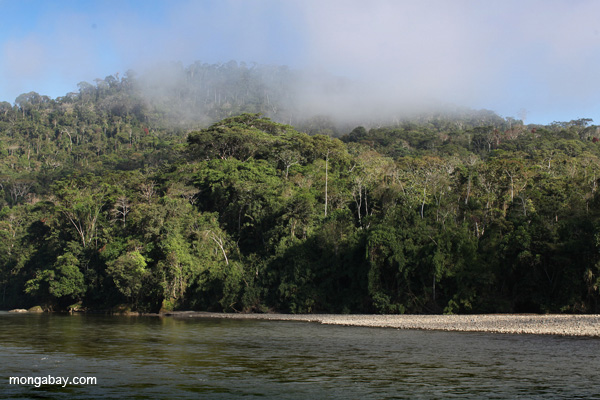 Pluspetrol, an Argentine oil and gas company, is eyeing a UNESCO World Heritage site in the Amazon rainforest for gas production, according to documents seen by the Guardian. Manu National Park in eastern Peru is considered one of the most biodiverse places on Earth and is home to indigenous tribes living in voluntary isolation.

The Guardian received access to a document written by the environment agency, Quartz Services S.A., for Pluspetrol, which includes references to fossil fuel “development” in Manu National Park. The document also states that Pluspetrol has already been turned down once for fossil fuel exploitation in the park. According to Peruvian law, national parks are off-limits to such activities, yet corporations worldwide have often found ways to circumvent such laws.

“Pluspetrol are fully aware that their exploration plans are illegal,” said Stephen Corry, the director of Survival International, an NGO devoted to indigenous-rights. “They will also know that trespassing on Indian land brings death and disease to the uncontacted inhabitants. If this project is allowed to continue, Pluspetrol could be responsible for the destruction of entire peoples.”

Pluspetrol is already operating near Manu National Park in an area known as Lot 88, but the new document confirms in writing plans to open up a new lot, dubbed Lot Fitzcarrald, which would include Manu National Park.

Manu National Park and the surrounding western Amazon is considered by most scientists to be the world’s most biodiverse ecosystem.

(12/12/2012) Indigenous groups plan to sue the government of Peru over the expansion of a oil concession they say intrudes on their native lands.

(10/15/2012) Major concerns about the danger posed by gas exploration in a UNESCO World Heritage site in the Amazon rainforest has prompted UNESCO to promise to lobby the Peruvian government. Manu National Park’s biological diversity exceeds “that of any other place on Earth,” according to UNESCO’s website, and is inhabited by indigenous people living in “voluntary isolation” who could be decimated if they come into contact with gas workers.

(12/08/2012) Concessions for oil and gas exploration and extraction are proliferating across Amazon countries, reports a comprehensive new atlas of the region.