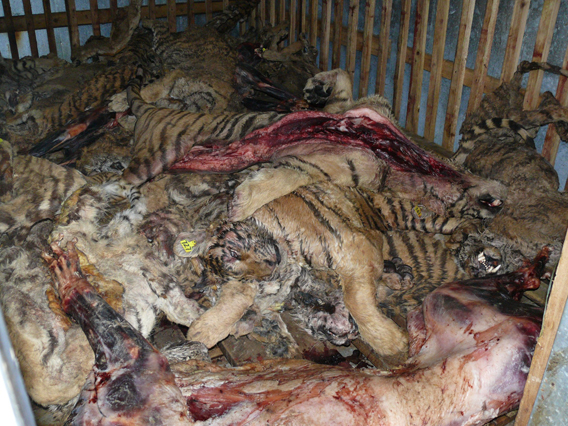 The number of tigers being captive bred in China for consumption exceed those surviving in the wild—across 13 countries—by over a third, according to a new report by the Environmental Investigation Agency (EIA). The report, Hidden in Plain Sight, alleges that while the Chinese government has been taking a tough stance on tiger conservation abroad, at home it has been secretly creating demand for the internationally-banned trade. Few animals in the world have garnered as much conservation attention at the tiger (Panthera tigirs), including an international summit in 2010 that raised hundreds of millions of dollars for the vanishing wild cats.

“The stark contradiction between China’s international posture supporting efforts to save the wild tiger and its inward-facing domestic policies which stimulate demand and ultimately drive the poaching of wild tigers represents one of the biggest cons ever perpetrated in the history of tiger conservation,” says Debbie Banks, head of the EIA’s Tiger Campaign.

In 1993, China banned the use of tiger bone, a popular item in traditional Chinese medicine. However, undercover investigations by EIA found that “tiger bones sourced from captive-bred tigers are not being destroyed, leading to what is likely to be a massive stockpile and consumer assumptions that trade is legal or will soon be legal.”

However wine made from tiger bones is still being produced and sold in China, and the EIA says that government has even encouraged it through a “secret” notification issued to traders in 2005. Under the notification any tiger farm housing over 500 tigers could produce and sell tiger bone wine; in order to circumvent the 1993 law, tiger bone is simply not listed as an ingredient.

“If you get some special permission, you can sell the tiger bones to assigned medicine-making factories and the products will be directly circulated in hospitals,” a trader told the EIA.

Traditional medicine is not the only threat to tigers in China. The EIA reports that tiger skins are being sold commercially and in many cases illegally. While the legal tiger skin trade is meant to be strictly regulated in China, the EIA says the system is “flawed” and provides “a cover for black market activities, including the re-use of permits and falsification of origins,” according to the report. The NGO alleges that China’s cat skin trade is fueling consumption not just of captive cats, but the poaching of wild ones as well.

The EIA argues that China’s policies are actively stimulating demand for tiger parts, undermining global efforts to double tiger populations by 2022. Tigers are currently listed as Endangered by the IUCN Red List; experts say only around 3,500 tigers survive in the wild as opposed to some 5,000 in China’s 200 tiger farms. One hundred thousand tigers were thought to roam the world in 1900, meaning the population has declined a stunning 96.5 percent in just over a century. While poaching and the tiger trade has helped decimate the big cats, they have also declined due to habitat loss and prey decline.

Banks says China must “vigorously address and terminate this intolerable disconnect between words and deeds which so undermines international efforts to save the tiger.”

The EIA calls on China to change its laws to protect tigers, destroy all stockpiles of tiger parts, and let traders know that “the
objective is to end all demand and trade.”

Banks adds that it’s not just foreigners who are calling for these changes, but many Chinese as well.

“A Chinese civil society movement has already appealed for changes to China’s wildlife protection laws, and Representatives of the National People’s Congress have submitted several proposals in recently years to amend laws and regulations […] and to end the commercial utilization of species such as bears and tigers,” she notes. 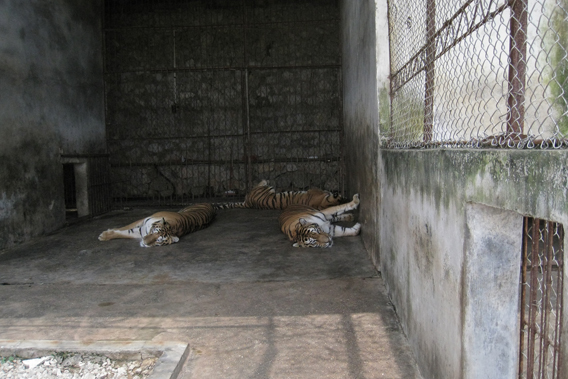 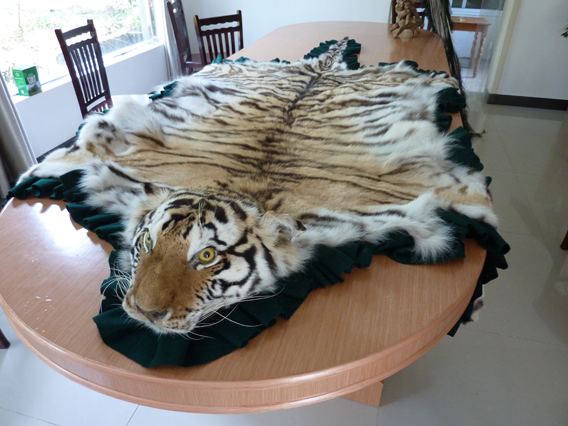 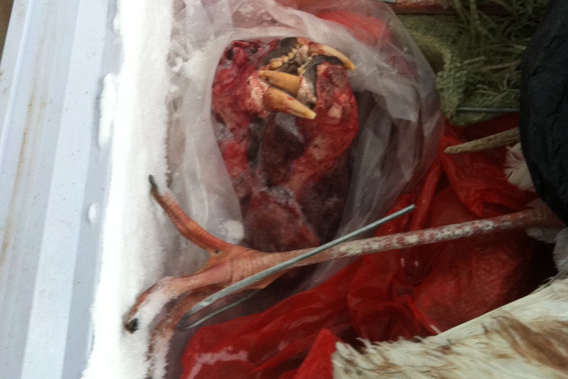 (11/07/2012) Kenyir Wildlife Corridor in northeast Malaysia is teeming with wildlife: elephants, gibbons, tigers, tapirs, and even black panthers (melanistic leopards) have been recorded in the 60 kilometer (37 mile) stretch of forest. In fact, researchers have recorded over 40 mammal species (see species list below), including 15 threatened with extinction according to the IUCN Red List. When these findings were presented by scientists to the Terengganu state government action followed quickly: all development projects have been halted pending a government study.

(11/06/2012) Sumatra’s Bukit Barisan Selatan National Park—home to the Critically Endangered Sumatran rhinos, tigers, and elephants—has become overrun with coffee farmers, loggers, and opportunists according to a new paper in Conservation and Society. An issue facing the park for decades, the study attempted for the first time to determine the number of squatters either living in or farming off Bukit Barisan Selatan National Park, a UNESCO World Heritage Site; the rough census—over 100,000 people—shocked scientists.

(10/11/2012) U.S. retailer Dollar General has stopped sourcing paper products from controversial brand Asia Pulp and Paper (APP), according to the World Wide Fund for Nature (WWF) which has targeted 20 companies for selling APP-sourced tissue and paper towels. APP has been under fire for years for deforestation on the Indonesian island of Sumatra, the last home to the Sumatran tiger (Panthera tigris sumatrae), Sumatran orangutan (Pongo abelii), and Sumatran elephant (Elephas maximus sumatranus), each of which is listed as Critically Endangered by the IUCN Red List.